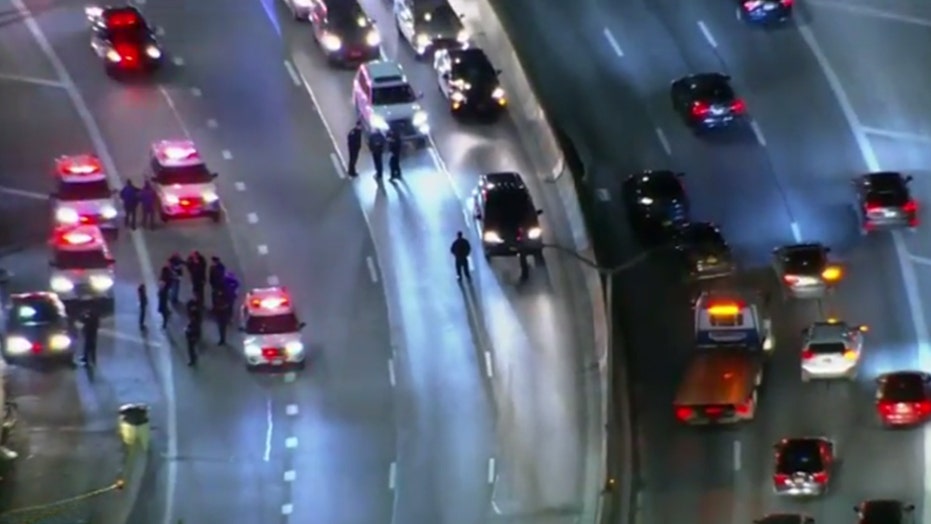 The 20-year-old driver, accused of hitting an officer, attempted to crash into a patrol car and driving the police to a mad pursuit overnight in New York City on Thursday night, was arrested early Friday, officials said.

Hours after his arrest, no charges against the suspect had ever been brought, reported the New York Daily News. Sources told the paper that the person who, according to the authorities, was behind the wheel of the BMW, was arrested after being last seen fleeing the vehicle and colliding with a social housing complex. .

The hunt began around 9 pm Thursday night, when the NYPD tried to stop the BMW for a violation of tinted windows. But instead of listening to the police, the suspect broke off the scene on 96th Street, trying to get into a police car, the police said.

He then headed to FDR Drive – one of New York's busiest alleys – but officers caught up with him again in lower Manhattan.

The BMW was found abandoned after the pursuit.
(Fox 5 NY)

Police told the New York Daily News that at one point, the driver, for the second time, had driven his BMW directly to a group of officers. The police reacted by opening fire and firing through the window of the BMW.

A police officer had lacerations to his arms and legs after being hit by the vehicle, but was released from the hospital a few hours later after undergoing treatment.

The identity of the suspect, who finally abandoned the vehicle and attempted to complete the attempt to escape on foot, has not yet been unveiled.