3 dead, including a student athlete, an alleged "drunk driver" – KAKE.com 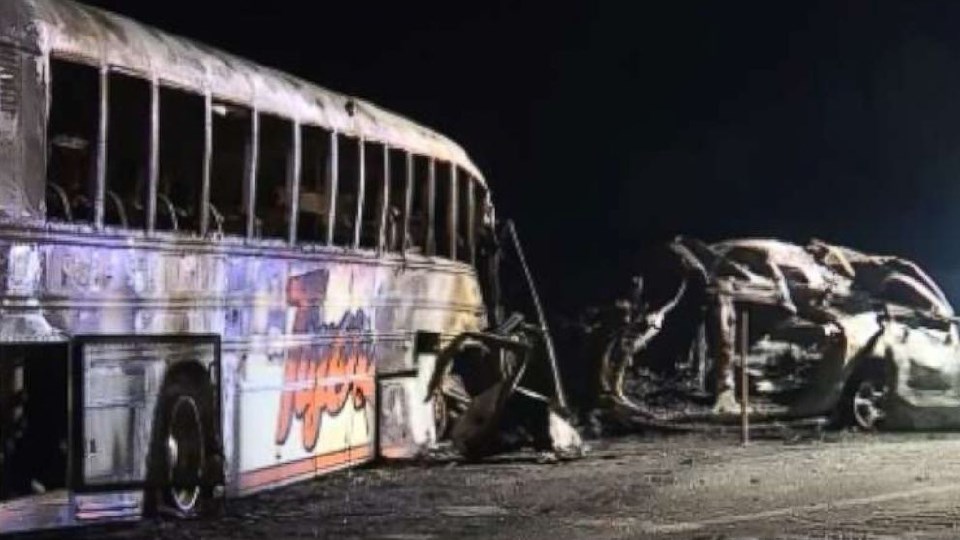 At least three people died – including a student – after a school bus carrying a college softball team "clashed" with an SUV allegedly driven by a drunk driver in Oklahoma, according to a news release. published by school officials.

The crash occurred Friday night near Bowlegs, Oklahoma, at 377 US in Seminole County, about an hour southeast of Oklahoma City, while the bus carrying six girls and their Konawa Junior coach High School crossed the Little River Bridge.

"… they were hit hard by a drunk driver," said school principal, Cory Ellis, in a statement released on Saturday.

A man and a woman of the SUV were declared dead on the scene, according to the Oklahoma Road Patrol. A child died on the bus.

The names and ages of all softball players, including the girl who died, have not been revealed, according to the State Highway Patrol.

The school should be closed Monday and extra-curricular activities will be suspended for the week, said Ellis in his statement.

"It's absolutely devastating for our community and especially for the family," said Karis Reavis, director of Konawa High School. "They had played Okemah [a town one hour northeast of Konowa] and come back to Konowa. "

A prayer vigil will begin at 6:00 pm On Sunday, March 11, the Superintendent announced that the director of performing arts offices and two local banks, the Sooner State Bank and Bancfirst, would open accounts to receive donations.

Konawa is 20 minutes south of Bowlegs, where the accident took place.

According to the authorities, six other people were injured in the accident, all on the bus. Joseph Scoggins, a 30-year-old bus driver, was treated for injuries to his head, arms and legs, and released.

Five students were also treated for minor injuries and released.

"We know that students and staff will respond in different ways to emergencies of this nature, so it will be important to have support to help staff and students in need," Ellis said in his release. . "Counselors will be available in the school to help students express their feelings about last night's event."

The bus was heading south shortly after 19:15. According to a preliminary investigation by the Oklahoma Road Patrol, the SUV had stopped in the southbound lane to cross another car.

The Seminole Police Service shared on Facebook around 9:20 pm Local time at which the road was closed due to the fatal accident: "You will NOT be able to cross back and forth or get close to the collision, please pray for families in this tragic situation."