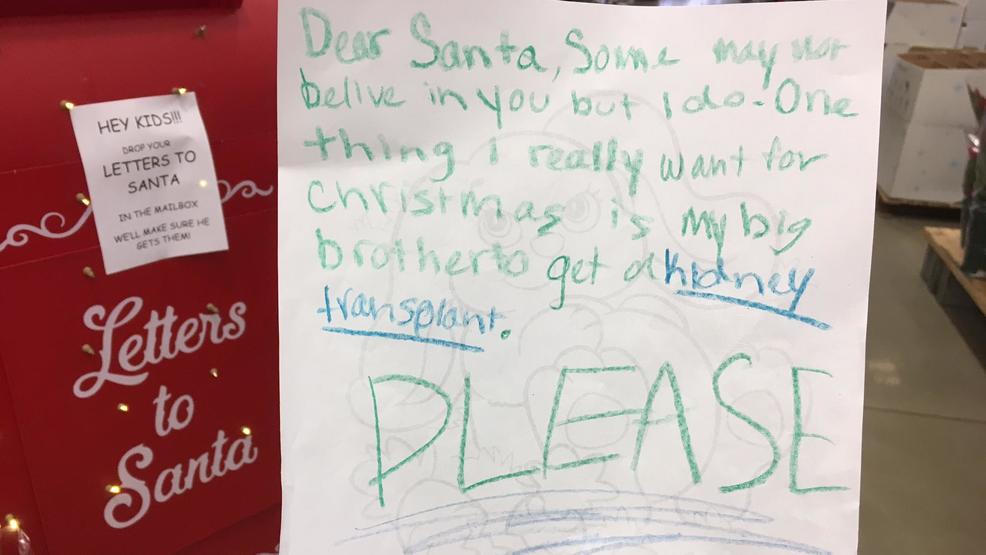 A little girl left a letter to Santa Claus at Franklin's Lowe's store asking for a kidney for his brother. (Photo: WLOS staff)

At this time of year, children write to Santa with their wish list for Christmas, most hoping to have toys. But a little girl wanted something more special.

"Some people may not believe in you, but I think so, one of the things I really want for Christmas is that my older brother gets a kidney transplant, PLEASE," wrote the girl. girl

The letter was filed at Franklin's Lowe's Store.

Associate Store Manager Shelly Thomas believes the little girl named Kaitlyn may have come from Florida, but Thomas still wants her back.

"Let's hope some of these patients get tested and that they show how important it is," Thomas said.

Customers said Kaitlyn's shares were comforting and reflected this time of year.

"It just makes me want to cry and the kids are asking for so much these days. You have a child who wants only the kidney of his brother, "said Pam Wallace.

"Knowing that your letter is going to Santa and that he will bring you everything you want and ask for something so important for someone else means so much," he said. Andi McNair.

Thomas said that they were telling the story as much as possible, including social media, hoping to help the family.

"That's the real sense of Christmas, for sure," McNair said.