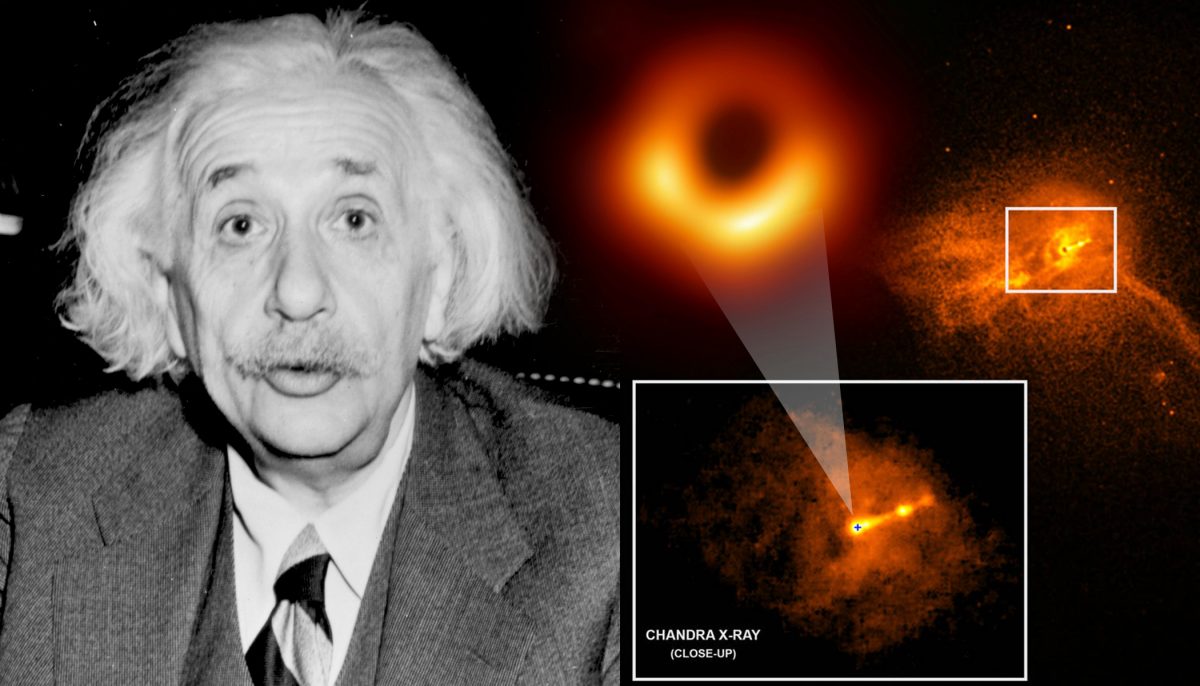 France Córdova, director of the National Science Foundation, said in a statement: "Black holes have sparked the imagination for decades. They have exotic properties and are mysterious to us. "

In fact, mysterious black holes, called "monsters" by scientists, are not empty spaces, according to NASA. As Albert Einstein's Theory of General Relativity shows, they are composed of "a large amount of matter wrapped in a very small space," mostly "remnants of a big star that dies in a supernova explosion." .

Einstein predicted the existence of massive, dense black holes in the universe, where the gravitational fields are so powerful that even light can not escape.

The American physicist of German origin, widely regarded as a genius today, made this theory known to the world more than a century ago on November 25, 1915 at the Academy of Sciences of Prussia.

"About a hundred years ago, Albert Einstein gave us a new description of the force of gravity, in which gravity exerts its influence through chains and curves in the structure of space and time." said Brian Greene, a physicist at Columbia University. a video for World Science.

On April 10, the centennial theory of genius on general relativity was again reaffirmed: the existence of gravitational and light-thirsty cosmic objects was true.

"Today, general relativity has passed another crucial test, this one ranging from horizons to stars," said Avery Broderick, a member of the Event Horizon Telescope (EHT) team at the University of Toronto. University of Waterloo and the Perimeter Institute of Theoretical Physics in Canada. press conference in Washington, DC

"You can see that Einstein's relativity is announced," said Vincent Fish, researcher at Haystack Observatory of MIT in Westford, and one of the 200 scientists involved in the project. "You know exactly how big this ring is. This was the first opportunity to test this hypothesis. "

Dimitrios Psaltis, professor of astronomy and physics at the University of Arizona and researcher of the EHT project, said in a press release: "The Horizon event telescope allows us for the first time to test the predictions of the theory from Einstein's general relativity around supermassive black holes in the center of galaxies. The predicted size and shape of the theory of shadows fits perfectly with our observations, which increases our confidence in this century-old theory. "

"If we are immersed in a shiny region, like a sparkling gas disk, we expect a black hole to create a dark, shadow-like region – something that Einstein's general relativity predicted. , which we had never seen before, "Heino Falcke of Radboud University, the Netherlands, chairman of the ISE Scientific Council, said.

Thursday: Albert Einstein sits at a machine dialing in 1934.

Despite the theory that propelled Einstein to fame, some scientists have argued that theory does not explain everything and that it requires revision.

Speaking on gravity, the Austrian physicist Andrea Ghez, who led a 20-year-old black hole experiment, told Express News: understood that we needed to go beyond Newton to have a more complete vision . "

Ghez added, "By exploring these increasingly extreme conditions, we find that something is missing.

"The closer you get to the heart of the galaxy, the shorter the time scales become."

In terms of light, Einstein's theory of general relativity is based on the fact that the speed of light is constant everywhere.

Researchers have suggested that the speed of light varies and that light travels faster after the Big Bang – a blow to Einstein's theory.

"The idea that the speed of light could be variable was radical when it was first proposed, but with numerical prediction it becomes something that physicists can really test. If this is true, it would mean that the laws of nature are not always the same as today, "said João Magueijo, cosmologist and theoretical physicist, at news.com.au.

Location of the historical discovery

The black hole that was discovered lies in the heart of a huge galaxy called Messier 87 or M87, near the Virgo galaxy cluster, 55 million light years from Earth.

The first snapshot of the black hole was captured by scientists using a global network of eight linked telescopes stationed on five continents in April 2017 for a week-long observation of black holes, according to Event Horizon Telescope.

"This is an extraordinary scientific feat accomplished by a team of more than 200 researchers," said Sheperd Doeleman, director of the EHT collaboration.

The huge black hole captured in the image should have a mass 6.5 billion times greater than that of our sun. The researchers believe that it is perhaps the largest visible black hole on Earth.

Posted by Event Horizon Telescope on Wednesday, May 16, 2018

What happens to the brain during a sudden impact? Egg yolks might contain the answer

48 SuperDoves to launch with SpaceX