A vaccination site in Roxbury, but for whom? 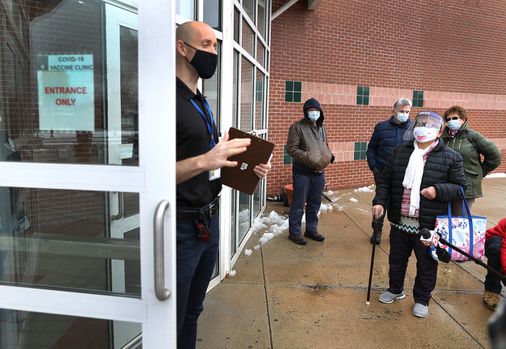 Jack O’Connor, 75, a retired healthcare marketer from West Roxbury, observed the skewed demographics as he waited for the mandatory 15 minutes after his first dose.

“I would say there were 40 people in there ‘when I was there. Maybe five “were blacks,” O’Connor said.

The clinic at the Lewis Center at Roxbury Community College was scheduled to start injections on Monday – the first day in which residents 75 years and older were eligible for doses in phase 2 of the state’s immunization schedule – but those plans were scuttled. before the snowstorm. The Boston Public Health Commission manages the site with a staff of 40 until the state takes over at the end of the month. The commission plans 1,100 appointments per week – about 220 per day, including Tuesday.

According to the state’s website, the Massachusetts immunization program is for people who live, work, or study in the state.

The immunization clinic is open to all eligible populations statewide, but Marty Martinez, Boston’s chief health and human services officer, said the city “absolutely” has racial equity in mind when ‘she chose the center as her mass injection site.

“It’s at the heart of the city’s COVID response since we tackled it,” he said. “We wanted a site in a community of color.”

Still, Martinez was not surprised to learn that the majority of people vaccinated at the site on Tuesday were white.

“There is no doubt that at present the overwhelming majority of people who get vaccinated statewide are white,” he added. “It’s still true, even though this place is in Roxbury.”

The succession of white faces entering and exiting the center reflects statewide data showing whites are vaccinated at a much higher rate than black, Latino and Asian residents. As of January 26, 43% of fully vaccinated people were white, according to the State Department of Public Health. Meanwhile, just under 4% of those who received both doses are Asian, over 3% are Latino, and less than 3% are black.

(State vaccination data on race and ethnicity is incomplete due to inconsistent reports from vaccinators, so these numbers do not add up to 100%. For 28% of fully vaccinated recipients, their race and their ethnicity are labeled “other” or “unknown” while about 20% are classified as “multiracial”.)

To combat this trend, the city has reserved about 15% of its appointments for people who sign up for a vaccine through community organizations, such as the Black Boston COVID-19 Coalition and the Greater Boston Latino Network. .

Eligible seniors can also call 311, the city’s helpline. They will be transferred to someone from the Age Strong Commission, who will make an appointment for them over the phone. As for the walk-in people, Martinez said: “We have to send them back. . . . We do not have additional doses on site. “

All publicly accessible appointments at the Lewis Center were made within two hours of being made available, and the slots for community organizations are also filling up, according to Martinez. The center is full for the rest of the week and will begin making appointments for next week on Thursday morning.

Caitlin McLaughlin, a spokesperson for the commission, said city health officials were trying to publicize the Lewis Center through social media, mainstream media and community partners, such as churches and communities. local health centers.

Meanwhile, the city plans to set up smaller vaccination sites in various neighborhoods, Martinez said, but when and where these sites open will depend on the state’s dose availability. As Massachusetts enters part three of phase 2 of its vaccination plan, when essential workers become eligible, Martinez said, “several of these clinics” will be open.

The Massachusetts deployment has been criticized for being slow in vaccinations. Activists also raised concerns about access to vaccines in hard-hit communities of color. Last week, Representative Ayanna Pressley sent a letter to Gov. Charlie Baker urging him to prioritize black and Latino residents for vaccinations.

“I am writing to implore you to act urgently and put the health and safety of our black and brown communities at the center of the Commonwealth’s COVID-19 response and on-going vaccination deployment plans,” the letter reads. .

Harvey Wartosky, a financial planner, and his wife, Joëlle, 78, white, live in Beacon Hill. They arrived early for their vaccinations at the Lewis center with paper envelopes in hand, containing copies of their Medicare cards and printouts confirming their appointments.

Booking an appointment online was “a complete nightmare,” Wartosky said. One of the young employees at his company managed to find open dates for him and his wife at the Lewis Center moments before all the seats were taken. The state’s prioritization process also dismayed Wartosky, who saw friends from other states get vaccinated while he and other Massachusetts seniors waited their turn. other groups, such as inmates.

“I wrote a letter to the governor,” Wartosky said. “I found it incomprehensible that [a prisoner] which costs me $ 25,000 a year and which takes society first over me, which contributes to society.

Just over an hour later, the Wartoskys walked out with round chest stickers proudly announcing their ranks among the vaccinated, the country’s most exclusive new club.