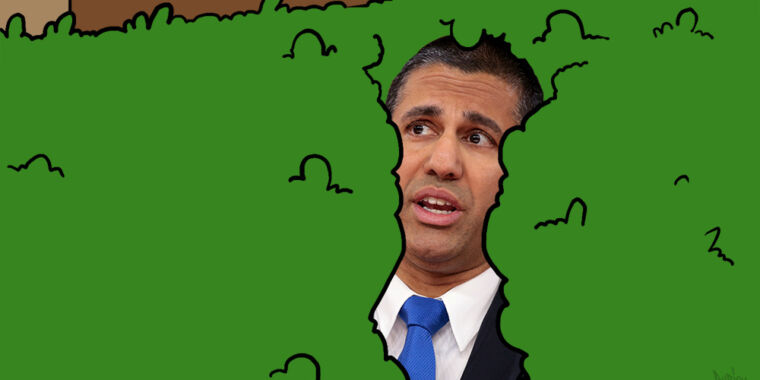 Federal Communications Commission Chairman Ajit Pai said he was abandoning his plan to help President Trump impose a crackdown on social media platforms and lightly criticized Trump’s incitement to a crowd that stormed the U.S. Capitol in a failed attempt to overturn the election results.

In October, Pai backed Trump’s proposal to limit Section 230 legal protections for social media websites that block or edit user-posted content. At the time, Pai said he would open an FCC rule-making process to declare companies like Twitter and Facebook do not have “special immunity” for their content moderation decisions. But Pai has not pushed the proposal forward since Trump’s election loss and has now said in an interview that he will not finalize the plan.

“The status is that I do not intend to proceed with the notice of proposed settlement [to reinterpret Section 230] at the FCC, “Pai said in an interview published yesterday by Protocol.” The reason is, in part, because, given the results of the election, there is simply not enough time to complete the administrative steps necessary to resolve the rule making. Given this reality, I do not think it is appropriate to move forward. Pai announced shortly after Trump’s electoral loss that he would be leaving the FCC on January 20, the inauguration day of President-elect Joe Biden.

Section 230 of the Communications Decency Act is a US law that states that providers and users of interactive computing services shall not be liable for “any action willfully taken in good faith to restrict the access or availability of material that the provider or user considers obscene, obscene, lustful, disgusting, excessively violent, harassing or otherwise objectionable, whether or not such material is constitutionally protected. Before abandoning his plan, Pai said social media companies ‘do not have the First Amendment right to special immunity denied to other media, such as newspapers and broadcasters,’ but opponents Conservatives and liberals to his plan said the FCC was doing it, did not have the constitutional power to reinterpret the law.

On Wednesday this week, as Congress convened to certify Biden’s electoral victory, the U.S. Capitol was stormed by a crowd prompted by Trump’s false claims that the election was stolen from him. Trump has used social media to spread his baseless claims, and his posting privileges have been suspended by Facebook and Instagram, while Twitter has deleted several of those inflammatory tweets. Trump had wanted the FCC to crack down on social media companies to prevent Facebook and Twitter from moderating their posts.

Protocol reporter Emily Birnbaum asks Pai if he thinks Trump “bears any responsibility” for “the violence and chaos” [that] to burst[ed] on Capitol Hill, perpetuated by Trump supporters on his behalf. Pai did not mention Trump by name in his response, but said it was a ‘mistake’ to suggest that the election results could be changed:

The scenes we saw yesterday were outrageous and extremely disappointing to those of us who cherish American democracy, a hallmark of which is the peaceful transition of power. To answer your question, I think it was a terrible mistake to suggest that the election results, and in particular the process that culminated yesterday in the Senate and the House, could be altered in any way. It was a terrible mistake and I don’t think we should have had any fun.

Birnbaum urged Pai for a more direct condemnation of Trump, asking, “Do you think the president’s indulgence for these theories was in part responsible for what happened?” Pai’s response to this question focused on rioters without mentioning Trump:

I did not study all the statements that were made and the actions that were taken. I followed him as closely as possible on television. But all I will say is that, given the circumstances we saw – armed guards defending the Senate chamber, people waving Confederate flags at the seat of government of the United States – this was completely unacceptable. , completely scandalous. We must be governed by the rule of law and not by crowd rule. Law and order must be restored and democracy must be respected. These are the basic expectations of every American citizen. This is what sets democracy apart from other governments around the world. I believe this deeply, regardless of political affiliation or circumstances.

Pai said he was still concerned about social media moderation decisions and was open to new regulations. “What I’m gonna say is what I said [in] November 2017, long before it became a mainstream tension in mainstream discourse: Social media is increasingly defining the public square in political discourse, “Pai told Protocol.” We need more transparency and to understand how some of these decisions are made, how certain content is allowed or not on these platforms. “Elected officials need to take this lack of transparency into account” when considering whether and how to regulate social media companies, “Pai said.

Despite this, Pai did not criticize Facebook and Twitter for restricting Trump this week. When asked if he agreed[s] with Facebook and Twitter’s decision to remove the president from social media, “Pai replied,” Given the circumstances we saw yesterday, I’m not going to question these decisions. “

Although FCC Democrats opposed Pai’s Section 230 push, saying the commission should not become Trump’s “speech police,” Biden called for the repeal of the section. article 230 a year ago.

Pai expects Congress to act. “There is now a bipartisan consensus among elected officials that the law should be changed,” he said. Obviously, the president believes that it should be repealed, President-elect Biden has campaigned for its repeal on several occasions, but within Congress there also seems to be a consensus that it should be revised or reformed in one way or another. ” Pai said this is “a very complicated question” and “personally I would think about it more carefully in terms of the immunity provision,” but said the decision would rest with Congress and the Biden administration.