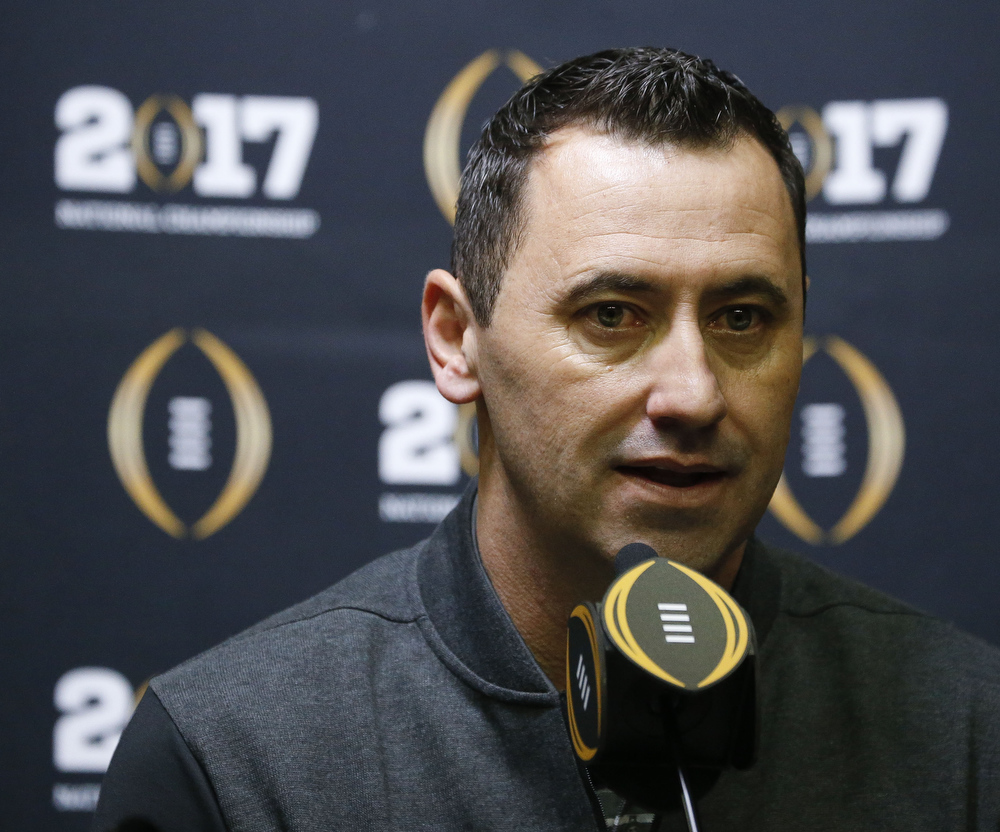 Coach from Alabama Nick Saban announced the addition of seven new assistant coaches to its staff. The coaches were announced in a statement Friday.

Check out the complete biographies of Alabama's new assistants.

Alabama lost the national championship game against Clemson 35-31 to conclude the 2016 season. The Crimson Tide scored 376 yards of offense against the Tigers and the offensive scored a bottom hit with a little more two minutes to play, but could not seal the win.

Sarkisian will inherit one of the most talented talent groups in the country. Strategist Tua Tagovailoa returns to the Heisman Trophy finalist after breaking most of the passing records in a second year school season. His four best receivers, led by the winner of the Biletnikoff Award Jerry Jeudy, are also back. Junior running back Najee Harris is the main rusher who comes back.

The Atlanta Falcons finished 10th in the NFL in 2018 with an average of 25.9 points per game. They averaged 389.1 yards per game, the league's sixth-best scorer. Atlanta's passing game was particularly strong, ranking fourth with 290.8 yards per game.

Sarkisian joined the Alabama staff as an analyst early in the 2016 season. He spent most of the season in this role before being promoted to offensive coordinator.

Sarkissian has made himself known as an assistant coach under Pete Carroll at Southern Cal. He coached the Trojans from 2001 to 2003 and from 2005 to 2006 after spending the 2004 season training the Oakland Raiders quarterbacks. He was promoted offensive coordinator for the seasons 2007 and 2008.

Sarkisian was hired by Washington to be head coach in December 2008. He has scored 34-29 in five seasons with the Huskies, qualifying for bowling in each of his last four seasons, never exceeding 8-4.

USC hired him as head coach for 2014 after firing Kiffin. He went 9-4 in 2014 and started the 2015 season 3-2 before being fired. Several reports have indicated that Sarkissian's alcohol problems have led to his dismissal. He spent the rest of the fall and the off season before Alabama hired him in 2016.

Charles Huff, who was the assistant head coach, running coordinator and head coach at Mississippi State in 2018, has been named new coach of the Alabama halfbacks.

Huff previously worked at Penn State from 2014 to 17, the last two of those seasons with the current coach of the MSU. Joe Moorhead. Huff coached and recruited the All-America offensive midfielder Saquon Barkley. In addition to MSU and Penn State, he has served in western Michigan (2013), the Buffalo Bills (2012), Vanderbilt (2011), Hampton (2010), Maryland (2009) and the Tennessee State (2006- 08).

Huff was considered in 2018 as one of the top recruiters in the state of Mississippi. He is the second Bulldog assistant to join the staff with the defensive line coach. Brian Baker.

Alabama named Holmon Wiggins as his new wide receiver trainer. Wiggins has spent the last three seasons at Virginia Tech. He worked with the head coach Justin Fuente for the last seven seasons, including four seasons in Memphis before.

He helped train the two biggest receivers of the Hokies, Cam Phillips and Isaiah Ford. Three of the school's four most successful seasons at the reception were played while coaching in Blacksburg, Va. Ford had 1094 yards in 2016, while Phillips had 983 yards in 2016 and 964 yards in 2017. He also helped the Memphis coach to receive the all-time leading scorer, Anthony Miller.

Prior to working in Memphis, Wiggins coached in the 2011 Tulsa season. He spent five seasons as a fallback coach in the state of Illinois from 2006 to 2010. He began his career as a student assistant and postgraduate assistant in New Mexico.

Alabama named Kyle Flood as his offensive line coach. He replaces Brent Key, who left for the same position at Georgia Tech after three seasons in Alabama.

In 2017, Flood helped Atlanta to produce an offense allowing only 24 sacks, tied for third lowest in the NFL.

He was fired from Rutgers at the end of the 2015 season, during which the Scarlet Knights scored 4-8. He received a one-year justification order from the NCAA that expired in September 2018 after an investigation determined that Mr. Flood "had not monitored his operations personnel. "and their supervision of a group mainly composed of student recruiters.

He was suspended three times by the university in the 2015 season after an internal investigation revealed that Flood had intervened with a teacher on behalf of a football player to maintain his eligibility.

Rutgers went 27-24 under Flood with bowl games in his first three seasons. He was selected Coach of the Year 2012 in Big East after having Rutgers tied for the Big East title and finished 9-4.

Flood was the coach of the 2005-2011 Rutgers line of attack. He retained that role as well as other responsibilities – Assistant Head Coach, Match Race Coordinator and Co-Offensive – until he was promoted on January 31, 2012, after having been promoted. Greg Schiano left to become the head coach of the Tampa Bay Buccaneers.

Prior to Rutgers, Floor spent three years in Delaware as an assistant head coach and offensive line coach. He was a member of the 2003 Fighting 'Blue Hens National Championship Team. He had been there since 2001-04.

Former Tennessee assistant Charles Kelly Alabama has been appointed coach of security and deputy defense coordinator. Kelly was the coordinator of the Flight Task Force and the Security Coach.

Kelly initially refused the opportunity to work for the former offensive coordinator of Alabama. Mike Locksley in Maryland as the Terrapins' Defensive Coordinator for staying in Tennessee.

Kelly was at Georgia Tech before FSU. He ran several positions there. Kelly was acting defense coordinator in 2012, was the coach of the 2010-2012 defensemen, coach of the 2008-09 half-corners and special teams in 2007.

Kelly's first coaching position took place in Tuscaloosa. He worked at Central High School from 1990 to 1992.

Former assistant of Alabama Sal Sunseri is back in Tuscaloosa as a linebacker coach. He spent the 2018 season as a defensive line coach in Florida. In total, he has 36 years of experience as a coach, including 10 seasons in the NFL.

Last year, the Gators forced 11 fumbles and made 37 sacks, a first for the team to reach these combined totals since 2015.

Sunseri was the coach of the 2015-17 Oakland Raiders linebackers. Previously, he had coached Florida State's defense goals in 2013 and 2014, winning two ACC Championships and the 2013 National Championship with the Seminoles. He worked with former FSU coach and current Texas coach A & M. Jimbo Fisher.

Sunseri had previously worked in Alabama from 2009 to 2011 as an assistant head coach and outdoor linebacker coach, helping the Crimson Tide win two national championships. After that, he spent a season in Tennessee as a defensive coordinator.

Alabama named former coach of the Mississippi State Defense Line Brian Baker as his defensive line coach. Baker and Huff both arrive in Tuscaloosa after 2018 with the Bulldogs. It was just one of Baker's three seasons in Starkville, Mississippi.

In 2018, Baker's staff won five of the SEC's 13 best defensive lineman awards. Sweat ride I have had it three times, and Jeffrey Simmons was chosen twice.

In Baker's first season with the Bulldogs, the defensive line ranked in the SEC's top five for the defeated tackle, with 81 points. Three of Baker's player players signed free agent contracts with the NFL in May 2017 (Nelson Adams, Johnathan Calvin and Notch James.)

Simmons was a freshman in 2016, and Baker helped him complete a Freshman All SEC season. A freshman MSU had not won this honor since Chris Jones Simmons led first-year league players in forced fumbles (two) and finished fifth in tackles. He made 40 saves, 3.5 on a loss and four quarters of a quarter.

Prior to college, Baker had a long coaching career in the NFL. He spent 19 years in the League as a defensive linebacker or linebacker for the San Diego Chargers, Detroit Lions, Minnesota Vikings, St. Louis Rams, Carolina Panthers Dallas Cowboys, Brown Celveland and Redskins from 1996 to 2014. Baker coached eight Pro Bowlers, including DeMarcus Ware and Julius Peppers.

While coaching Georgia Tech's linebackers, the Yellow Jackets won the national championship in 1990 as the country's only undefeated team (11-0-1). Tech beat Nebraska 45-21 at the Citrus Bowl to finish the season.

Baker is from Baltimore. He played as an outside linebacker in Maryland from 1980 to 1983 and helped the Terps win the Atlantic Coast Conference in his last season. This is where he started his coaching career. He was a student coach and assistant graduate from 1984 to 1985. He graduated in marketing in 1985.