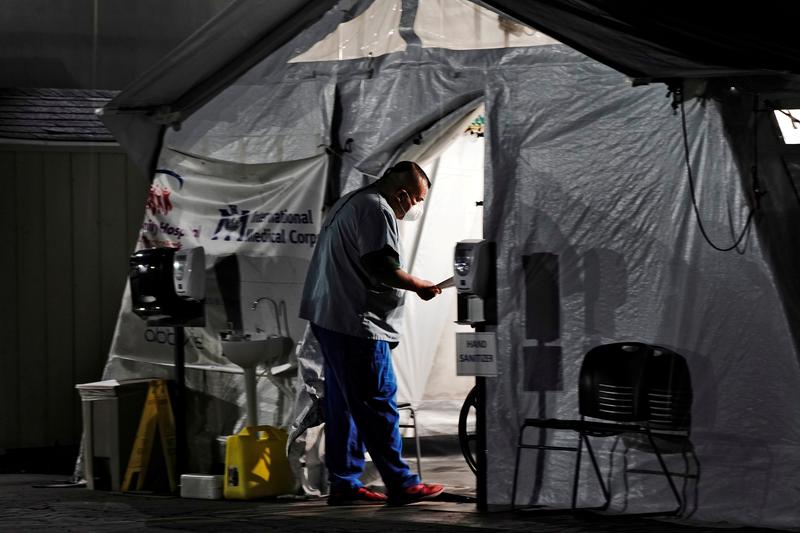 The order, published late Monday and effective immediately, marked an escalation in measures taken by national and local authorities in the face of the alarming increase in COVID-19 infections, hospitalizations and deaths.

Ambulances were forced to wait several hours to unload patients at some Los Angeles hospitals, causing delays throughout the county’s emergency response system.

“Patients under full traumatic arrest who meet the current criteria of Ref 814 to determine death should not be resuscitated and should be declared dead at the scene and not transported,” said Marianne Gausche-Hill, medical director of the Los Angeles County Emergency Medical Services Agency. in the directive.

Reference 814 refers to county policy on determining and pronouncing death in a patient who has not been taken to hospital.

California, the most populous U.S. state, has been hit particularly hard by the latest wave of coronavirus, which some public health officials attribute to Thanksgiving holiday gatherings in November. Los Angeles is one of two counties in California to report a shortage of intensive care unit beds.

California reported 72,911 cases of COVID-19 on Monday, a single-day record since the start of the pandemic.

More than 20.8 million people have been infected with the virus across the United States since March, and the death toll stands at 355.00. A record 129,000 COVID-19 patients were hospitalized on Tuesday.

The worsening situation has stepped up pressure on state and local authorities to speed up the distribution of the two coronavirus vaccines so far approved for emergency use.

Federal health officials said Monday that more than two-thirds of the 15 million coronavirus vaccines manufactured by Pfizer Inc and Moderna Inc and shipped to the United States have yet to be administered.

But some healthcare workers started receiving their second injection of the Pfizer vaccine this week. Both vaccines require two doses three or four weeks apart.

The governors of New York and Florida have said they will penalize hospitals that fail to dispense injections quickly.

“It’s a matter of life and death,” New York Governor Andrew Cuomo said at a press conference Tuesday. “If a hospital has done all of its health workers, fine, we’ll take that stock back and go to essential workers.”

An additional 3 million doses of the two vaccines were sent to U.S. states on Tuesday, Acting Defense Secretary Christopher Miller said in a statement, bringing the total to more than 19 million in 21 days.