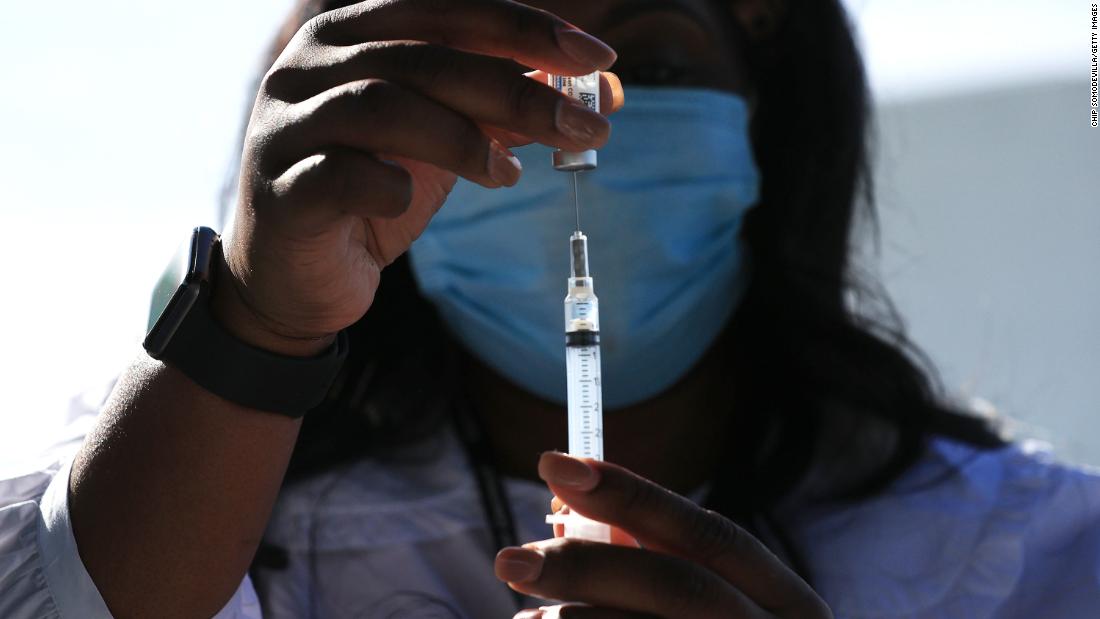 “People were concerned about safety, we now have hundreds of millions of doses out there, so we have great safety data,” Emergency physician Dr Anand Swaminathan told CNN on Saturday. “People were worried about the effectiveness,” he said, adding that there is now real data showing the effectiveness of vaccines.
And finally, Swaminathan said, some Americans were concerned that the vaccines had not been approved by the Food and Drug Administration and only received emergency use authorization. But Pfizer / BioNTech announced on Friday that it has launched a request to the agency for full FDA approval of their vaccine for people 16 years of age and older – making it the first Covid-19 vaccine in the United States to be evaluated for full approval by the FDA.

The FDA will “act as quickly as possible,” without compromising its safety standards, to assess Pfizer’s Covid-19 vaccine for approval, White House Covid-19 response coordinator Jeff Zients said on Friday.

More than 151 million Americans – about 45.6% of the U.S. population – have received at least one dose of the Covid-19 vaccine, according to data from the Centers for Disease Control and Prevention.

More than 112 million Americans – nearly 34% of the population – are fully immunized, according to CDC data.

US official: confidence in vaccines is only part of the puzzle

For officials across the country, getting more Americans vaccinated will now be an uphill battle, as experts say the United States has reached the crowds who weren’t as keen on getting the shot or still have questions .
Immunization rates are already falling. For the first time since early March, the seven-day average Covid-19 vaccine doses administered in the United States fell below 2 million per day, according to CDC data released on Saturday.

But confidence in vaccines is only a “piece of the puzzle” when it comes to the challenges the United States faces in its vaccination efforts, US Surgeon General Vivek Murthy said on Friday in a statement. White House briefing on Covid-19.

“Obstacles to immunization fall into three broad categories,” he said. “Confidence, motivation and access to vaccines.”

And local, state and federal efforts are underway, he said, that aim to address all three elements.

“I know it has been a difficult year and everyone in our country has been called upon to come together and sacrifice massively,” said Murthy. “I want to be clear that this pandemic will end. The sooner we get vaccinated, the sooner that day will come.”

Last week, President Joe Biden announced a new goal to deliver at least one dose of the Covid-19 vaccine to 70% of American adults by July 4. As of Saturday, four states have already done so: Connecticut, Hawaii, Massachusetts and Vermont.

One factor that may have contributed to the slowdown in vaccinations was the recommended break on the Johnson & Johnson Covid-19 vaccine, an expert said on Saturday.
That recommendation was lifted last month and officials said the label would be updated to warn of the risks of blood clots. Experts concluded that the vaccine’s benefits outweighed its “known and potential risks” and that the vaccine continued to meet “standards for safety, efficacy and quality,” the commissioner said at the time by Acting FDA, Dr. Janet Woodcock.

But the recommendation to take a break had its own effects.

“(The) Johnson & Johnson break cast a shadow over the momentum we had gained,” said Dr Jayne Morgan, clinical director of the Piedmont Healthcare Covid task force. “I think the folks who were on the fence have stepped off the fence and are taking a look again as we move towards what we hope will be full FDA approval of Pfizer.”

Two weeks after lifting the break recommended by J&J, this vaccine represents only a very small portion of doses administered in the United States – and the current rate of administration is significantly lower than the rate before the break, according to data from the CDC.

Over seven days, the J&J vaccine accounted for roughly 3.5% of the total doses administered, according to data released by the CDC on Friday.

Boosters will likely be a reality, expert says

Meanwhile, the CDC is preparing for seasonal Covid-19 vaccine recalls in case they are needed, its chief said on Friday, adding that researchers are also looking into whether the United States will need a booster that works specifically against certain variants of coronavirus.

“We are doing studies on boosters to see if we will need them,” CDC director Dr. Rochelle Walensky told actress Jennifer Garner in an interview posted on Instagram. “We want to be prepared for them if we need to.”

Potential Covid-19 boosters could be offered in the same way as the annual flu shot, Walensky said.

“We hope we don’t have to do it every season, but we are preparing in case we do,” she added.

A batch of new studies published last week show how well Covid-19 vaccines work against disturbing new variants – and one of them indicates that booster doses can help them work even better.

“I think most likely we’ll be recommending boosters,” Swaminathan told CNN on Saturday. “Whether it’s six months, one year, we still don’t know. What we do know is that even against the variants, our vaccines are still quite effective.”

“But I think the boosters are going to be a reality,” he added.