Astronauts arriving on Mars will not be able to walk. VR can save them 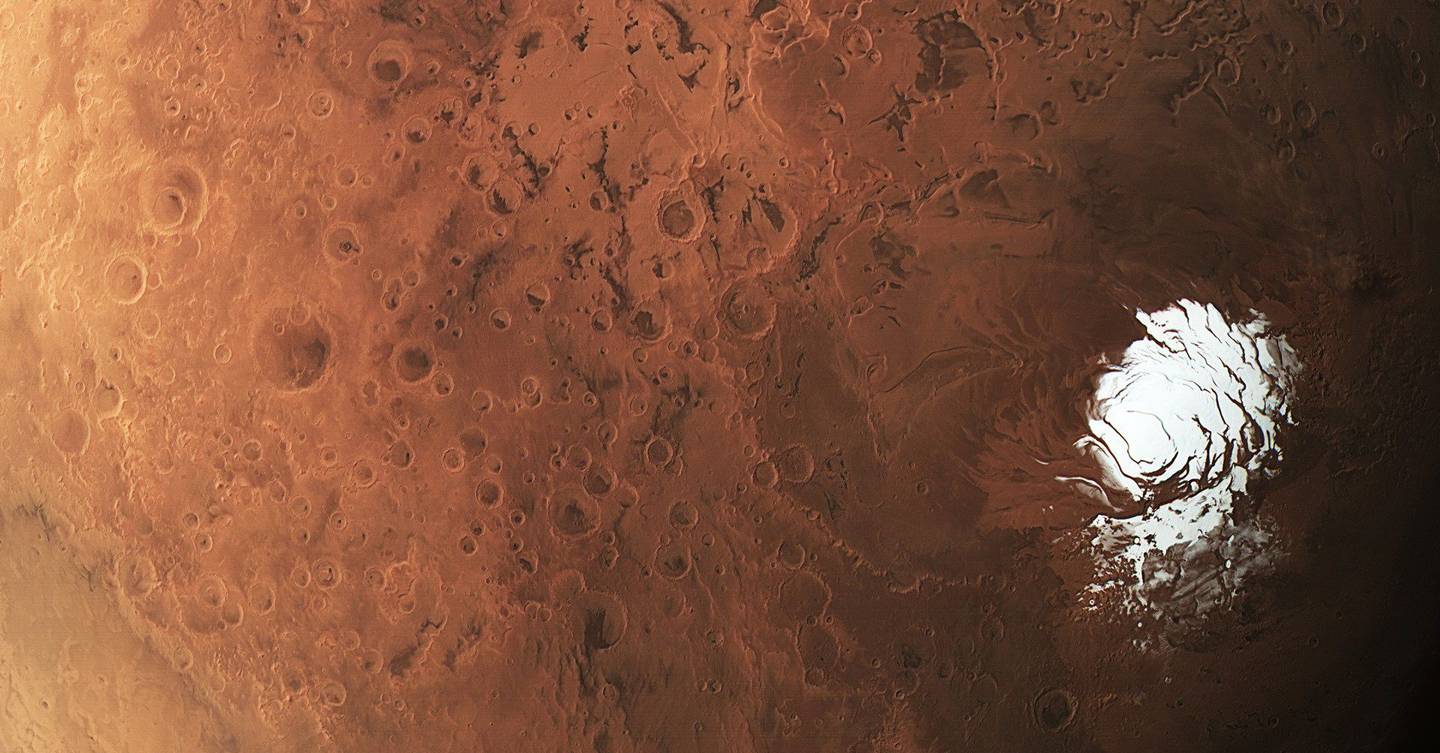 This lasts about 23 minutes and gives the impression of "passing over Niagara Falls in a barrel on fire, then crashing very hard."

For example, NASA's retired astronaut Ron Garan describes the return of space, trapped in a Soyuz capsule in free fall into the atmosphere. The touchdown, slowed by a parachute and, at the end, by six small rockets, is called "soft", but in reality, it is extremely difficult.

We all saw the scenes once the capsule landed: astronauts and cosmonauts were taken from Soyuz and neatly placed in chairs. This is not a precaution. people coming back from space can not literally walk. The reason, however, is not due to a sudden comeback, but to the fact that they have somehow lost their legs, even temporarily.

Astronauts who return to Earth after a long stay in space are so disoriented that they can not usually walk properly for 24 hours or more. It turns out that human brains work differently in space and when an astronaut comes back, he needs a little time to replenish himself. Now, NASA neuroscientist Marissa Rosenberg is considering using virtual reality headsets as a tool to shorten training.

Rosenberg saw it with his own eyes – three times during his encounter with astronauts, just after their Soyuz capsule made a thud in the desert near Karaganda, Kazakhstan. "They are stunned and sick of the movement," she said after presenting her research at the PauseFest conference in Melbourne earlier this month. The reinterpretation of the translation of the tilt of an otolith is a disoriented aspect – a bite, she laughs at it, so the researchers call it simply "Otter".

It is a theory that the organs of your inner ear function differently from the way they function on Earth. On the ground, the inner ear normally detects the translation – any kind of linear acceleration, so go up and down in lift, or left and right, or start a car and stop it, as well as tilt. "If you had to tilt the chin in the space, however, the inner ear would stop detecting the tilt and only detect the translation," says Rosenberg. This is where the name comes from: you reinterpret this signal, which once meant translation and inclination. Now this only means translation.

Researchers say that our brain is plastic, which means that it learns quickly enough in a few days. For some reason, the brain does not care why the inner ear no longer feels inclination.

Here is how it works. Imagine the brain as a box containing jelly and hair cells crossing this gelatinous matrix. In addition, there are small calcium stones called otoliths. Suppose you hold this jelly tray in a car and someone presses on the brakes, the jelly and everything else curl a little bit back. The hair cells are attached to a nerve and, when they bend, they send the signal to the nerve we are bending over – you stop or accelerate, or you go up or down.

Now, if you tilt your box with the jelly down, gravity will pull and fold these hair cells. On Earth, your brain has no way of differentiating between tilting and translation from this organ alone, Rosenberg says. "Obviously, thanks to the vision, the muscles of our neck and other organs, I can say if that's what I'm doing or if I'm accelerating by car. The brain understands it, "she explains.

But when you go into space and you hold your jelly and a member of the team pushes you very quickly, you will always suffer this deviation of the otolith above your hair cells, because they have always a mass and therefore an inertia. But when you tilt the box – well, upside down, it will not fire on the hair cells, because they are not subject to any gravity. This is why the brain detects one and not the other.

For astronauts who return to Earth, when they lower their eyes to catch, for example, a cup of coffee, they have the impression of approaching it, whereas in reality, the distance to the coffee does not diminish at all . "It's a huge source of disorientation," says Rosenberg. The same with the turns – they stagger suddenly. "We think it's the same thing. When they turn their heads, they feel like they're moving, "she adds.

The brain learns quickly enough: in less than 24 hours, it has recovered about 70%, while in two weeks it has recovered about 98%, said Rosenberg. When you have "a whole village", as she says, to get you out of Soyuz and take care of yourself, the problem is not particularly serious. In addition, official support: a military helicopter with a medical team on board can locate the capsule from far away and as soon as it lands, the helicopter is on the ground – and to the capsule within 45 seconds. "It's amazing, in 15 minutes they have a giant tent on the plane, they inflate it, they're powered by a generator, it's really spectacular to see," says Rosenberg.

But if humans were to ever land on Mars? There will be no one to take them out. This is also a problem in the near future, when American astronauts will finally start using US gear to return to Earth, especially when it is a capsule like Orion, designed to land on the water. The crew may have to go out alone, especially in case of an emergency on board, such as a fire. In their current state, Rosenberg says, it is unlikely that they can do it.

And that's where virtual reality comes in. For the past few years, Rosenberg has been experimenting with virtual reality headsets, training subjects much less disoriented when they return from space. For this part of the study, she has not worked with astronauts yet, but her test subjects have simulated trips to Mars and vice versa, simulating a reinterpretation of otolith translation, or Otter.

First of all, a test subject is placed in a virtual environment that looks like a flat Martian plane, with mountains on the horizon to navigate. To deceive the brain, however, their vision of "Mars" is covered with a checkerboard. This transparent grid is not fixed in the direction they are looking; instead, when they turn their heads, the checkerboard moves with their vision. "It's an auto-kinetic illusion that makes you feel like you're moving when you're not. So when they turn their heads to the left, the moving checkerboard gives you the impression of moving linearly to the left. Indeed, Rosenberg poses a number of RV problems – vertigo, confusion, disorientation – and uses them to his advantage.

Without training, your body would simply collapse. For four consecutive days, the subjects of his test run about 200 steps for about 20 minutes, disoriented and without. At the end of this training, they are able to walk without falling, whether their vision is disoriented or not. Three months later, she again tested the same people and was able to show that they had retained enough training to avoid falling, even when they saw the auto-kinetic delusion. "It means we can train [astronauts] on earth, and they will have the benefits when they come back, "she says.

It is not yet certain whether Rosenberg will be able to test his discoveries on real astronauts. At NASA, researchers regularly come up with competing proposals to solve a problem and will only give the necessary assent. If his is selected, she hopes to work with the team of astronaut coaches. But can virtual reality really help astronauts, knowing that despite years of hype, virtual reality has been incredibly slow to gain momentum?

"Simulation has been used for decades to train pilots, and training in virtual reality simulation is being used in the military," says Erica Southgate, virtual reality expert at Newcastle University. Australia. In education, the most common use of virtual reality is in the training scenarios, she added, which is to help people acclimatize to the conditions that await them long before.

But how to use virtual reality or other immersive technologies for higher order thinking tasks is less well known, says Southgate.

For example, for an original creative task or situation requiring reasoned evaluation and decision-making in circumstances where there may be no clear answer. "Right now, there is a lot of enthusiasm for immersive VR and education," she says. "What is needed are interdisciplinary approaches involving collaborations between psychology, computer science, biomedicine, education and the arts" for more rigorous research.

Tuong Nguyen, an analyst at Gartner, says we're still in exploration mode with virtual reality – both in terms of what can be done and the potential results. For example, the Lucile Packard Children's Hospital in the United States uses VR to reduce pain. "I think that virtual reality can be used to provide an immersive experience that can give people the opportunity to practice and become familiar with real-life situations, and that it works." to learn certain tasks, to acclimatize to unique and demanding situations or to improve its current decision-making capabilities, "says Nguyen.

But the technology must first evolve. He says helmets need to be made lighter, smaller and cheaper, and manufacturers need to solve the problem that some users have to cause dizziness and nausea. Nevertheless, virtual reality offers an advantage in situations of high costs, high insurance and high risk types – as for astronauts. "I see technology as a marathon, not a sprint. We did not go from the phone to the smartphone. We are on the eve of something very exciting, but it will take a few years for all the pieces to come together for that to happen. "

– What happens when you drink Huel and Soylent for a month?

– Why does your standing desk not solve your problem of sitting