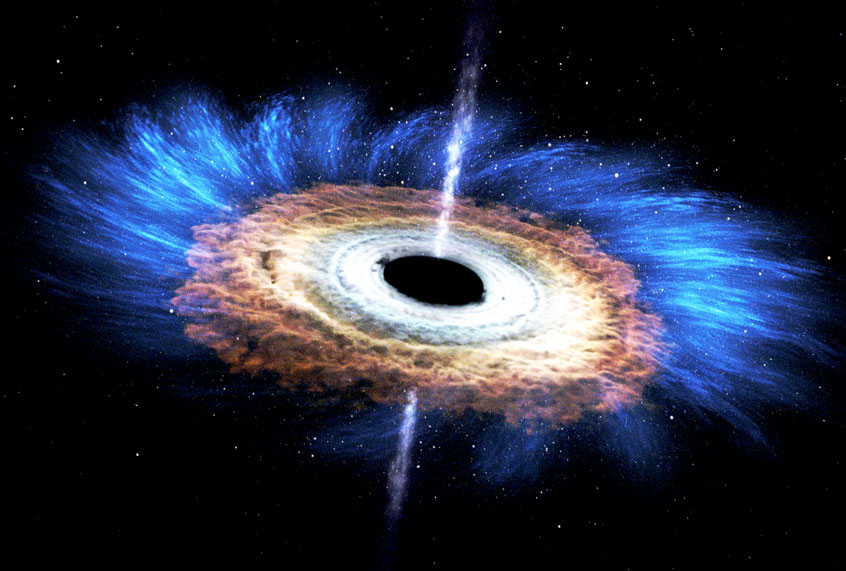 What happens when two dead stars meet in a deep space? In this case, one devours the other. During the first detection of this type, scientists think they have spotted a black hole swallowing a neutron star. The ability to detect this distant collision has been made possible by gravitational wave observatories of the Earth, a type of recent and new observation that has only been possible for a decade.

"Scientists have never detected a black hole lower than five solar masses or neutron star greater than about 2.5 times the mass of our Sun," said Susan Scott, head of the General Theory group. from the relativity and data analysis of the Australian National University and principal investigator with the ARC Center of Excellence for gravitational wave discovery, said in a declaration. "Based on this experience, we are confident that we have just detected a black hole engulfing a neutron star.

The event occurred about 8 550 billion kilometers from Earth and was detected by gravitational wave discovery machines in Italy and the United States, called LIGO and Virgo. These devices have detected ripples in space and time.

"About 900 million years ago, this black hole ate a very dense star, known as a neutron star, like Pac-man – probably instantly smothering the star," said Scott. "The ANU SkyMapper telescope responded to the detection alert and swept the entire area of ​​probable space where the event occurred, but we did not find any visual confirmation. "

Neutron stars are small but incredibly dense. They are formed when stars of a certain mass range collapse under their own gravity, thus overcoming the powerful force that prevents electrons and protons from melting; in these collapses, electrons and protons merge into a neutron ball as dense as an atomic nucleus. Neutron stars generally have a diameter of about 20 kilometers and a mass greater than that of our sun, whose diameter is 1.39 million kilometers.

However, when the larger stars collapse, the repulsion force between neutrons does not remain intact and said stars collapse into a singularity whose output speed is greater than the speed of light. These are known as black holes.

Collisions between black holes and other stellar objects, such as neutron stars, are one of the most powerful releases of energy from the universe. The amount of gravitational energy released is so vast and reverberates throughout the universe, so that it can be detected by gravitational sensors based on the Earth. Black holes are notoriously difficult for physicists to understand, since we can not "see" them inside; their nature defies such questions because the information can not escape them. Such detections allow astronomers to better understand these difficult-to-understand spatial events.

"We have always thought that there should be binary systems of a black hole and a neutron star that were going around in space. If this event were confirmed, it would be the first proof that such systems actually exist, and that they are getting closer and closer together and eventually break up together, "said Scott.

However, since the event is not confirmed, there are other possibilities. The first is that the smallest object could be a very light black hole.

"We are not aware of any black holes in the universe with masses lower than about five solar masses," Scott said via CNN. "This would raise many new questions such as:" How does a black hole form so light? "

Scientists hope to detect more similar events, to confirm or deny what they observed.

"We can better estimate the size of the population of these systems in the universe and also better understand how these systems" come together "in the first place," Scott said. "On the expanded wish list, we hope soon to have a supernova that will disappear so that we can capture the gravitational waves expected from this type of event and better model the process of the supernova."

The last decade has seen historic advances in the knowledge of black holes by humans.

Years of advances in imaging technology have also led to the first image of a black hole last spring.