At Coachella, the Gospel according to Kanye West 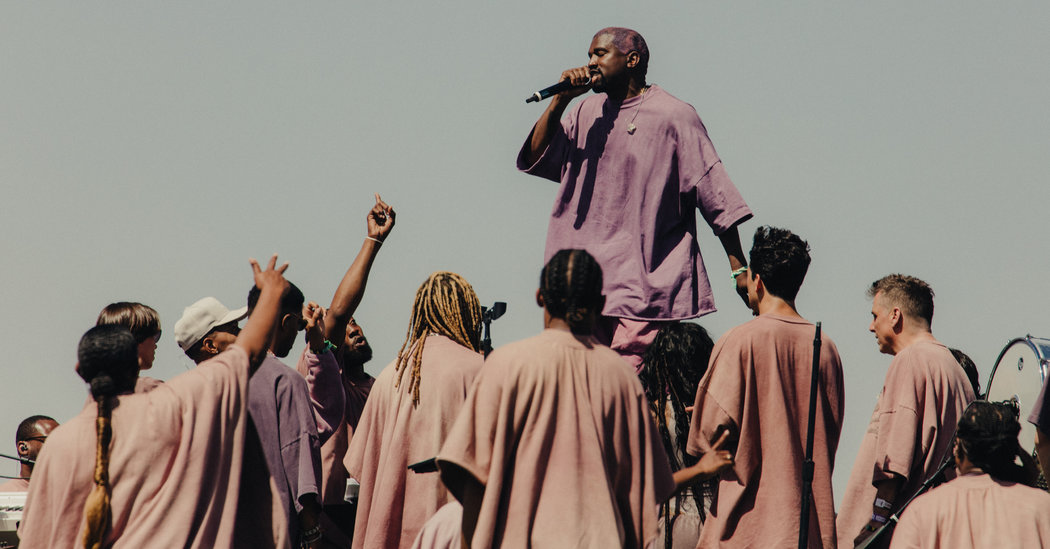 INDIO, California. – Some days, Kanye West is sacred and some days he is secular. Determine which ones can be a slippery challenge, determined by tolerance to dissonance, appreciation of the tension between mind and action, and the ability to forgive.

The last two years have been some of the toughest in the West. He divided his supporters by publicly supporting President Trump and began making fires with his untimely statements on slavery and mental health, among others. Starting last spring, he retired to Wyoming to complete a cycle of albums for himself and for others, and recalibrate himself emotionally. But in the fall, he was back in the headlines for a disturbing meeting with Trump in the Oval Office.

[[[[In Nature with Kanye West: Read Our Latest Interview with Hip Hop Brandon.]

In the months that followed, he apparently sought calm. A desire for purification seemed to be at work in the intimate invitational sessions – Sunday service, they call them – he's been heading to Calabasas, California since January. Excerpts of the performances have traveled the world via social media, mainly on Instagram of his wife Kim Kardashian West. The aesthetic is that of healing – dozens of performers dressed in all white pick up popular songs like quasi-religious balms.

On Sunday morning, West presented a larger version of these sessions at the Coachella Valley Music and Art Festival for a concert on Easter morning. Or convening. Or ablution. For more than two hours, West was the captain but not the performer, the architect of a wonderful and sumptuous presentation, but also, in many ways, a simple humble congregation.

Since the beginning of his career, West has defended the interests of the spiritual impulse in secular spaces. This was the underlying theme of this service – and it functioned much more as a religious service than as a concert – an argument to which the performance was referred again and again, interspersed with sacred music with soul and hip-hop music. hop and even house music, refusing to draw barriers between them while fighting this belief could be found inside one of them.

Yes, the gospel is the stuff of the church. But as Coachella's song selections show, the gospel is also visible. It is there in "As" of Stevie Wonder that the choir roared with joy. It is there in the urgent ministrations of Back to Life of Soul II Soul. It is there in the guttural testimony of DMX, who appeared towards the end of the show during "Ultralight Beam". and delivered a two-minute homily. Subsequently, West seemed to be in tears (according to the live video, it was difficult to verify it in person), Kid Cudi and Chance the Rapper offering him comfort.

West, Chance, DMX: three very different followers of the hip-hop Christian pulse work side by side. One of West's lesser-known legacies is to pave the way for artists like Chance and Kendrick Lamar, who have to weave spiritual themes into their uncompromising music. May the West think that a church-like setting to amplify its message makes sense. And it was appropriate that he could populate this moment with his spiritual children.

West and his team performed at the top of a custom-built hill for the occasion, separated by a barricade of the crowd of several thousand people who showed up early to see him play. There was a set for the choir, dressed in the combination of mauve and rust tracksuit and matching ponchos; a second just above for West, his collaborators and the group; and a final platform at the very center for whoever ran the service at any given time. In the background, the mountains of Santa Rosa and San Jacinto stood, serving as silent sentinels.

As a show, it was immersive and diffuse – sometimes it was thunder, sometimes it was haze. From the superb choir, there were rickety versions of the gospel numbers "How to excel" and "Satan, we are going to slaughter your kingdom." There was a jump, almost Baltimore-club taken on Fred Hammond "This Is the Day, while a new song, the patient "Water", has never found its place.

In the middle of the half-time, singer Teyana Taylor performed a "never would have done" sweet and soothing, then came down to communicate with the dancers who, for most of the show, had been scattered nonchalantly around the hills behind the performance, but which & # 39; d gathered at the foot of the stage for an intense session of plagues and trampling.

It is at this point that West is also activated. He followed Taylor down the hill and into the crowd of dancers who at that time mingled with the audience of the VIP section. It was a glorious Mosh.

This is how the West spent most of the morning: surrounded by others, vaccinated. Sunday service, by design, rises and falls on the power of the group. Typically, when West is on stage, he is inclined to speak, but here he hardly speaks.

His hair was dyed in purple speckled – in keeping with his outfit – he was mostly content to act as an agent of the creativity of others. He hit just twice – parts of "All Falls Down" and, in the end, "Jesus Walks", the first hit that served as the de facto foundational text for this performance. (It's rarely as vividly as West mixes the spiritual and the left like "Father Stretch My Hands, Pt. 1", who, after the moving incantations of his long-time collaborator, Tony Williams, does Is never materialized.)

West was originally destined to be one of the festival's poster heads, but the organizers of Coachella would have refused to build a dome for his performance amid the grounds, as he had asked. (He last led the festival in 2011 and since then has been a surprise guest three times, including Saturday night, with Kid Cudi.)

This Sunday service was announced just three weeks ago, but it was a show that people have been gearing up for their weekends. The festival-goers got up early to have a place of choice at the barricades. West Kim 's family members, Kris, Kendall, Kylie, Travis and others – were sitting on a cloth lying on the floor. Justin Bieber, Jaden and Willow Smith and members of the K-pop Blackpink girls group watched the series. It was almost certainly the first (and last) time that DeRay Mckesson and Lil Pump shared the same oxygen.

The lines at the "Clothes of the Church" merchandise tent, which began more than two hours before the show, have never faded. There were Jesus Walks socks for $ 50, Trust God t-shirts for $ 70, and sweatshirts and sweatpants for a lot more. It was a reminder that, aside from gospel music, it was not actually about a church.

And yet, this performance has always privileged the power of the group over the zeal of the individual. The choir was phenomenal, even adding a questioning air to "Jesus Walks". And the dancers, dozens of them, moved with a rigorous enthusiasm. At the end of the show, members of the public were encouraged to hug their neighbors.

The only time the West really took center stage was during "Jesus Walks". He walked around the hill hitting, followed by the choir, and at the end of the song, he fell to the ground. For about a minute, surrounded by no less than six cameramen, he knelt in a respectful silence.