AT & T's efforts to network "5G E" have only sparked controversy and a new study throws even more doubts about technology. Opensignal today released the results of a study comparing AT & T's 5G E network speeds with those of Sprint, T-Mobile and Verizon 4G LTE.

The test results show that AT & T's 5G E network performance is comparable, if not worse, to traditional AT & T and Verizon 4G LTE networks. In the chart below, Opensignal shows that "5G E-enabled" devices, which include the latest iPhone, performed better on T-Mobile and Verizon than on AT & T.

Opensignal also compared AT & T's 5G E network to the speed of its 4G LTE network. This test showed that AT & T's 5G E is actually superior to its LTE network, but does not give the improvements that 5G is supposed to bring to consumers.

AT & T users equipped with a 5G E-capable smartphone benefit from speeds similar to those of other operators wearing the same smartphone models as those of AT & T calling the 5G E. The 5G E speeds benefiting AT & T users are indeed typical 4G speeds and 5G promises. 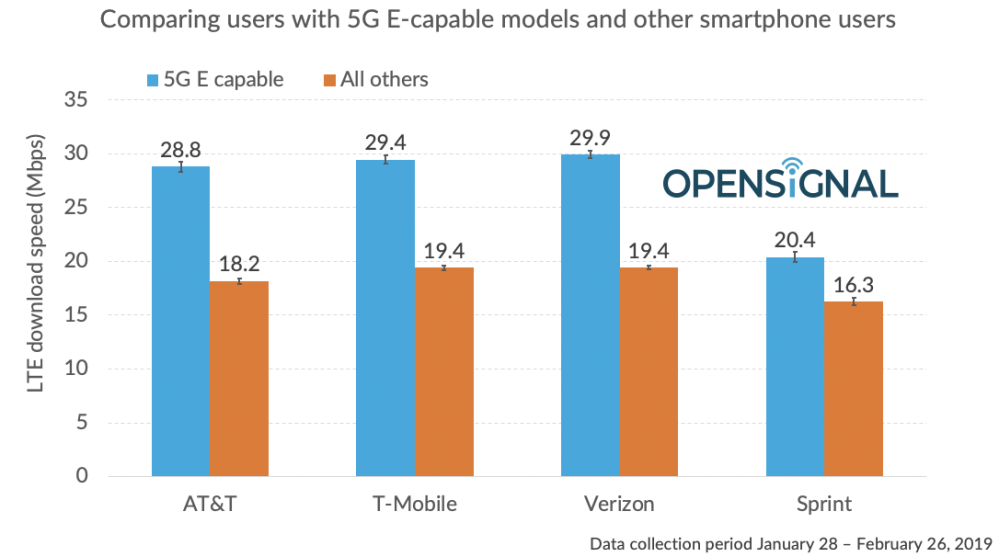 In the end, however, Opensignal challenged AT & T's "5G E" branding, claiming that it only served to confuse consumers:

"If one service offers a significant advantage over another, it is not unreasonable that it is labeled differently, but not with a name that confuses customers," said Brenden Gill, CEO of Openignal, in a statement. communicated.

AT & T, of course, refutes the results of this study. The carrier stated in a statement to CNET that the test of Openignal was defective in its procedure:

AT & T's 5G E network has been widely criticized by the industry. Earlier this month, Sprint criticized AT & T in a New York Times ad, criticizing its "false and misleading marketing campaign" around the 5G E. AT & T however defended the mark controversial by stating that it was used to inform consumers that they are in an improved service area.

Apple has played in the AT & T iOS 5G E brand, which is currently in the beta test phase and is expected to be released later this month, replacing the AT & T LTE logo with "5G E" on some markets.