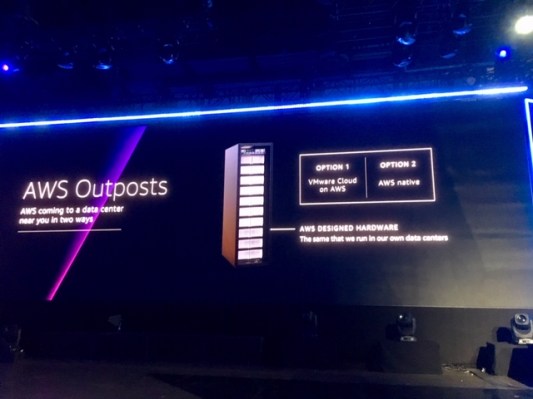 AWS has always been the pure cloud vendor and, even though he has agreed to the hybrid, he is now adopting it fully. Today in conjunction with VMware, he announced a pair of options to bring AWS into the data center.

Yes, you read it correctly. You can now place AWS in your datacenter with AWS hardware, the same design used in their own data centers. Both new products are part of the AWS Outposts.

There are two variants of outposts: VMware Cloud on AWS Outposts and AWS Outposts. The first uses the VMware control panel. The second allows clients to run on-premise computing and storage using the same AWS APIs that are used in the AWS cloud.

In fact, VMware CEO Pat Gelsinger joined Andy Jassy, ​​CEO of AWS, on stage at AWS re: Invent for a joint announcement. The two companies have been working together for some time to bring VMware to the AWS cloud. Part of this announcement is flip-flopping and brings the AWS cloud to work with VMware. In either case, AWS sells your hardware, installs it if you want, and even maintains it for you.

AWS has fallen behind in this area, preferring the vision of a cloud rather than going back to the data center, but it is a tacit acknowledgment that customers want to operate in the cloud. two places in the near future.

The announcement also expands the company's cloud-based vision. On Monday, the company announced Transit Gateways, which is designed to provide a unique way to manage network resources, whether in the cloud or on premise.

Now, AWS brings its cloud to the site, which Microsoft, Canonical, Oracle and others have long ago. It should be noted that today's announcement is a public foretaste. The effective exit is scheduled for the second half of next year.