Bees: many British pollinating insects in decline, according to a study 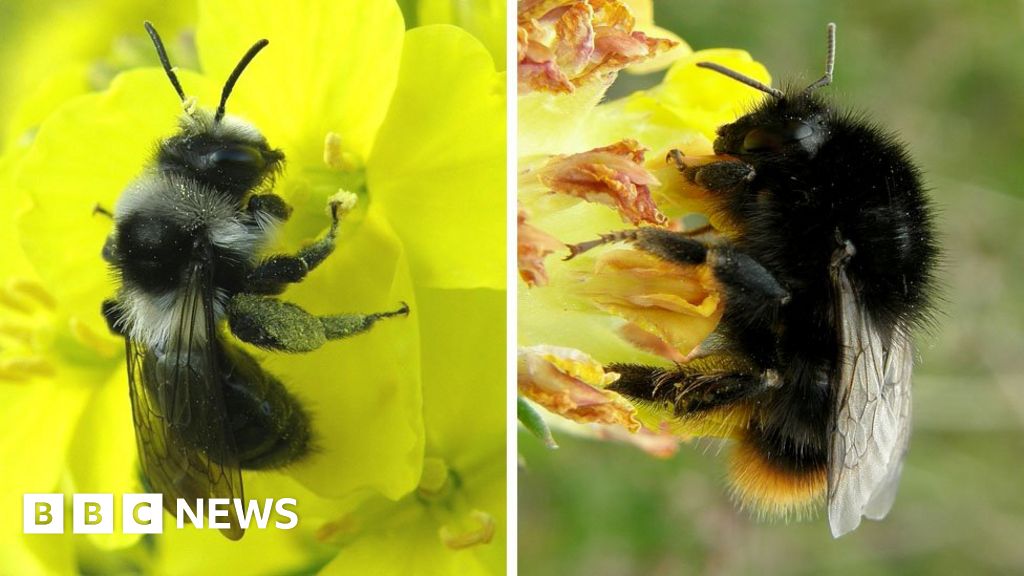 According to a new study, one third of wild bees and hoverflies are in decline.

If current trends continue, some species will disappear completely from Britain, scientists said.

The study revealed "winners" and "losers" among hundreds of wild bees and hoverflies, which pollinate food crops and other plants.

The most common species gain at the expense of the rarest species, with a general picture of endangered biodiversity.

Scientists warn that the loss of nature could create problems in the coming years, including the ability to produce food crops.

The study examined trends in 353 wild bees and hoverflies in Scotland, England and Wales over a period of 33 years starting in 1980.

A third of the species have declined in terms of areas where they have been found, while about 10% have become more abundant, including bees that pollinate flowering crops, such as rapeseed.

While honey bees perform some pollination in hives, much of the pollination of food crops and wild plants is done by their wild relatives and other insects, especially hoverflies.

Gary Powney, of the Center for Ecology and Hydrology (CEH) of Wallingford, Oxfordshire, said that while the increase in the number of pollinators of key crops is a " good news ", the species have declined overall.

"It would be risky to rely on this group to support the long-term food security of our country," he said.

"If something happened to them in the future, there would be fewer species to intensify and fulfill the vital role of crop pollination."

Losses have been concentrated among the rarest specialized species. Dr. Nick Isaac, also of the Center for Ecology and Hydrology (CEH) of Wallingford, Oxfordshire, said that it was "a particularly bad news if you are interested in wildlife and to conservation ".

"Losers" include solitary bees, which live in burrows in the ground, and highland bees, living in the mountains and heaths. Among the "winners" are 22 of the most important crop pollinators.

Experts say that the increase of certain common species is part of a context of global loss of diversity.

"According to this new analysis, every square kilometer in the UK lost an average of 11 species of bees and hoverflies between 1980 and 2013," said Dr. Lynn Dicks of the East University. Anglia.

She said that the pattern of biodiversity loss occurs wherever we look.

"It's a process of homogenization that leaves us with a much poorer and less resilient natural world."

Matt Shardlow, chief executive of the Buglife charity, said the new document provides further evidence that our pollinators are having problems and that the health of our environment and our food supply can not be taken for granted.

"Solitary bees, rare bees and bees and hoverflies living in the highlands are particularly in difficulty and need urgent help," he said.

The research is based on the analysis of over 700,000 records of volunteers recording the presence or absence of insects in their area.

This gives a measure of reducing or expanding the range of pollinators, but does not take into account the factors responsible for this change.

What is the cause of the decline?

Scientists believe that habitat loss is probably the key. Other possible factors include climate change, which could have an impact on high and northern species.

According to them, the relative success of some species may be due to environmental measures put in place by farmers, such as sowing wildflower strips.

This may be due to the fact that there is a lot more rapeseed than in 1980.

Another factor is the use of insecticides. The scientists said it remained to be seen how pollinators could be affected by the restrictions introduced since the completion of the study.

In 2013, the European Union temporarily banned the widespread use of insecticides called neonicotinoids, in the light of evidence suggesting that they caused damage to bees.

Last year, the ban of three of the main types of neonicotinoids became permanent and expanded to all outdoor crops.

What can be done to help?

The researchers said activities such as agriculture and wildlife-friendly gardening can have a positive impact on pollinators in cities and the countryside.

They echoed previous calls to gardeners to encourage pollinating insects by growing patches of wild plants and weeds.

The loss of insects has far-reaching consequences for entire ecosystems. Insects are a food source for many birds, amphibians, bats and reptiles, while plants rely on insects for pollination.

A recent scientific study of the number of insects worldwide showed that 40% of species experienced a "dramatic decline rate", with bees, ants and beetles disappearing eight times faster than mammals, birds and reptiles.

Previous studies have revealed losses of butterflies, moths, beetles, bees and hoverflies across the UK.

The study is published in the journal Nature Communications.