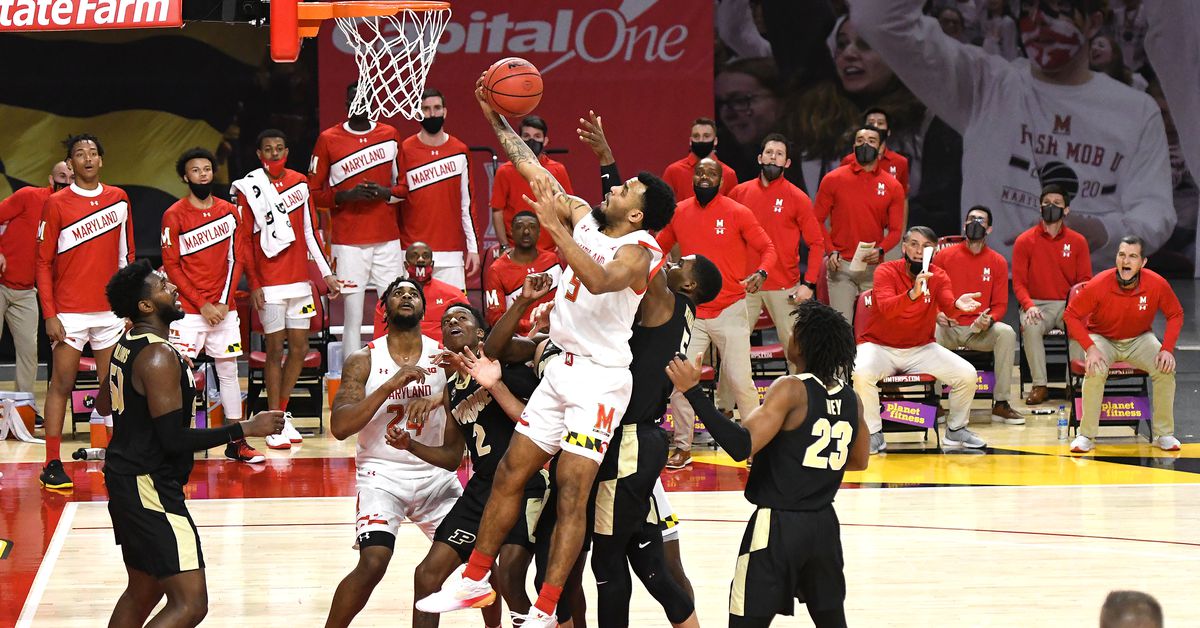 Down two points with less than a minute to go against No.24 Purdue, Maryland’s men’s basketball was in desperate need of a save. The defense had been playing tremendously all night, and that’s exactly what they did on the crucial play, forcing goaltender Jayden Ivey to a deep three-point failure.

Junior guard Eric Ayala then stepped into the painting at the other end, sneaking past several Purdue defenders to reach for the bucket and fire the bonus shot. He made the first try, but couldn’t pull it off on the second to tie the game.

The Terps defense once again forced the Boilermakers to miss the next possession, leaving the home side with 16.6 seconds to win the game after a timeout.

With the ball once again in her hands, Ayala dribbled into the paint, hoping for similar success at the bottom. He threw a shot, but he didn’t drop, almost putting the contest in jeopardy. But he grabbed his own rebound and caught the foul to give Maryland a one-point lead with 3.3 seconds left.

The Boilermakers were fortunate enough to quickly get the ball back to the ground to win it, but the Terps defense picked up again, forcing a roll as seconds ticked to seal a 61-60 win.

“I think we always respond when our backs are against the wall,” said head goaltender Darryl Morsell. “… We knew we had to stop to win. So I think we locked ourselves in when it mattered, made the necessary saves and we all made big hits.

Prior to the game, consistency was the main concern of head coach Mark Turgeon’s team. The team knew their identity lay in their defense, but their effort and energy on that side of the ball had fluctuated from game to game. On Tuesday night, the Terps had the opportunity to pursue their goal of fighting over every possession to secure their first victory at College Park and upset another ranked opponent. And that’s exactly what he did in the last minute of play.

“I said to our staff… today I said, ‘Guys, we have to get this win if we’re going to do anything,’” Turgeon said after the win. “Today was really important. It would have really made it difficult for us to make the playoffs if we hadn’t won today.

The two teams were stuck in a close game from the first prediction, with neither team scoring more than 10 points until around eight minutes were left in the first half, at which point Purdue took a lead of 11-9.

After struggling to keep Wisconsin in the opening period of their last game, the Terps defense forced the Boilermakers to start the game 3 for 10 from the ground and frequently return the ball.

Although he showed much better ball movement than in previous games, Maryland struggled to get looks they sometimes liked against a stifling Boilermaker defense. Still, the players stepped into the paint to draw fouls and were already in the bonus with 9.45am left until halftime – although that’s not much.

As the half progressed, the team found more open shots, but the Terps were unable to knock them down – a common occurrence throughout this season, especially in the period of opening. Maryland entered the break with a mark of 1 in 12 on all three balls. The team also didn’t shoot the ball particularly well at any other part of the pitch, with an on-field goal percentage of 40.9% after 20 minutes.

With Purdue up 27-22, the game’s biggest lead so far, and less than a minute to go in the half, Maryland knew something had to happen.

Ayala aggressively attacked the painting, drawing two defenders near the basket. Instead of taking the contested shot, he found an open Hakim Hart in the left corner of the arc. After receiving the rebound pass, Hart took a dribble, faked his defender, and drained a deep two to reduce the deficit to three as the break entered.

Turgeon often threw his hands up in disgust as he watched Boilermakers ‘shots drop to start the second half, clearly frustrated by the Terps’ defensive effort that did not extend from the first. The head coach and his team showed a lot of emotion throughout the fight as they tried to guide the team to their first victory on their home turf. He said earlier this week that Maryland couldn’t take a single possession and that if they did, staff were quick to remind them.

Up six points, Purdue had a chance to earn their biggest lead in the competition and drain the life of the home team. But the Terps weren’t going to let that happen; there was too much at stake.

Ayala pressured guard Isaiah Thompson as he tried to get something outside the arc, eventually forcing the Boilermaker to throw a rebound pass at Treivon Williams in the paint. Encountered by a swarm of players from Maryland, Williams attempted an out pass, but Morsell jumped into the air to intercept the ball.

The senior guard sprinted down the court, took a moment to slow his body roll, then threw a dime at Ayala on the left side of the arc. Ayala quickly threw up the triple, bringing the game back within reach.

“I thought Darryl was great all night,” Turgeon said. “Defensively, his leadership, he just wasn’t going to let us lose.”

The Terps didn’t allow Purdue to score on the next two possessions and began to find their rhythm on offense, Aaron Wiggins draining a treble from the top of the arc to tie the game at 36-36.

Purdue took a shot on his next trip to the floor, but Wiggins followed it with another triple from the same spot, prompting his teammates on the bench to jump from their seats, yelling and waving towels. Maryland could tell he was back in the close game; the question was whether he could capitalize on this momentum.

“Our mindset was just to be confident and we knew the shots would fall in the second half,” Wiggins said. “Once we started, there was nothing you could do to stop us.”

As the close game continued to come and go, the Maryland defense again played the hero by holding Purdue scoreless on the field for 3:21. Still, anyone could enter the contest, and the boilermakers knew it. They then took five of their next seven shots to lead 52-48 with 4:53 to go.

Purdue continued to hold a slim lead over the minutes. Like their first game of the season, which the Boilermakers won 73-70 after the Terps failed to convert late on the line, the contest would come down to the wire. But this time around, the Terps refused to let a victory slip away.

“A lot of our guys were emotional because we knew we could get it and everyone believed in it,” Wiggins said. “… It was a very good victory for us. You know, that gives us confidence as we continue to play in such a difficult conference and against great teams.

1. Maryland forced Purdue to make mistakes early on. Purdue has been one of the Big Ten’s most prone to turnover this season, and Maryland made sure to take advantage of it right away. Led by goaltender Darryl Morsell, the Terps forced 11 turnovers in the first half, just two short of the Boilermakers’ average per game.

Purdue ended the game with 15 total turnovers, leading Maryland to eight points on those turnovers.

2. The Terps were beaten early on the boards. For the second game in a row, Maryland lost the rebound game. Purdue held a dominant 17-9 advantage on halftime boards, including six on the offensive glass. The Boilermakers then passed the Terps 33-24, with just one Terp at Wiggins recording more than four boards. But when it mattered most, Maryland got the rebounds they needed to seal the game.

3. Treivon Williams bounced back big. In the last meeting of these two teams, fault issues prevented Trevion Williams from entering his dynamic attacking rhythm. That wasn’t the case on Tuesday night, as Williams attacked the Terps at will from the opening point of the game.

He had 23 points on 9 of 12 shots, also lowering 11 rebounds to tie a high. However, it was Williams ‘mistake on Purdue’s final possession of the game that sealed the Terps’ victory.