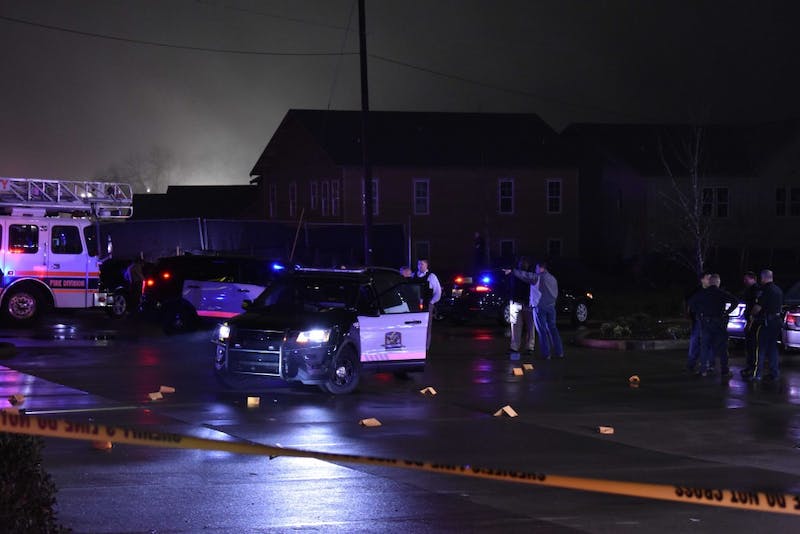 Auburn police gave the go-ahead after the dramatic man hunt for a suspect suspected of killing a police officer in Auburn on Friday night.

The incident ended with dozens of shots fired near the Auburn Veterinary School and a complex of apartments near the neighborhood. It is unclear whether the suspect was neutralized, but the police would have been getting closer.

An officer from the Auburn Police Division was shot and wounded during an evening shooting on Opelika Road by General Dollar.

Auburn police captain Lorenza Dorsey said the officer had been beaten "several times" by a shooter arrested at the Dollar General on Opelika Road. The officer tried to stop traffic after a robbery was reported near Dean Road.

Police identified the suspect as Christopher James Wallace, 38, who fled. Wallace is not from the Auburn area, police said.

A white woman was also in the vehicle with Wallace.

Auburn Campus Safety said in a Tweet that the police had given everything. The police will remain and the scene will probably be blocked.

A massive human hunt has been launched. Police armed with assault weapons were on an active stage on Wire Road, near the School of Veterinary Medicine and a complex of apartments in the area. across the street

It is not known whether the suspect was apprehended or neutralized. Fire trucks are on the scene near Wire Road and smoke is in the air, although it is not clear if the smoke is linked.

The veterinary school was locked up when activity shifted to the area and shots were fired.

Police say the officer, who has been working in the department for four or five years, is likely to recover. He was alert when he was taken to the East Alabama Medical Center for treatment. It has not been identified.

Anyone who sees the suspect, Christopher James Wallace, should call 911. Do not come near.

According to Dorsey, the police are looking for the white man wearing a camouflage hoodie. He was driving a 2006 Silver Jeep Liberty, although he does not know if he is still in this vehicle.

The Auburn police have confirmed a first email from Campus Safety at Auburn University.

Dozens of Auburn police officers and other law enforcement officials reacted to a shootout that allegedly took place at the Dollar General on Opelika Road around 5:30 pm. Police are always looking for the suspect.

The crime scene band is still visible around the scene at Dollar General and beacons are on the ground indicating ballistic evidence on the store's parking lot. A police car was parked in the center of the car park with the door open.

"Police looking for a suspect, suspected of being in a Jeep Liberty money, etiquette 6AB5267 from Alabama," was emailed to students by Campus Safety . "The suspect is a white man wearing a hooded tank top.If you see this vehicle or a suspect, do not approach it and do not call the Auburn police at 9 am 11 ".

Several sections of Opelika Road have been closed.

It's a story of rupture.

We will continue to provide more information when we get them. Cory Blackmon, community reporter, reports the scene.