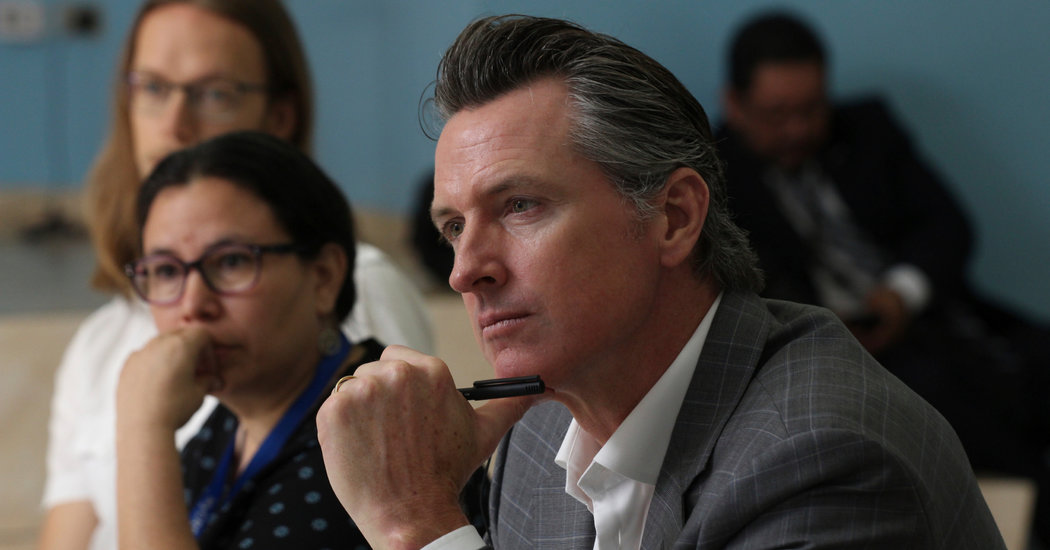 As the forest fire season announces imminent, California Governor Gavin Newsom on Friday asked the state legislature to help Pacific Gas & Electric and other public services. to bear the cost of fires triggered by their equipment.

Newsom's announcement follows PG & E's bankruptcy filing in January, which raised difficult questions about who should pay for the billions of dollars in forest fire damage and how California could reduce the frequency and severity of these fires.

"If we do not start trying to materialize the ideas of this report, our future is not very promising," Newsom said after publishing a paper outlining several proposals in broad terms without providing many concrete details.

Collective amenities have caused many of California's deadliest forest fires, but the bankruptcy of PG & E shows that these companies may not be able to afford these costs. In the case of PG & E, these costs could be as high as $ 30 billion for fires in 2018 and 2017. If more utilities have to go bankrupt because of these expenses, California may not be able to able to achieve its ambitious clean energy goals.

One solution, Newsom said Friday, would be for the state to create two funds to pay for the damage caused by the forest fires. According to the report released by his office, these funds could be used to pay homeowners and businesses who lose their property in forest fires faster than public services could.

But it is unclear whether Mr. Newsom's funds would be sufficient to solve the problem. The governor has not said how much money the funds should have available to them and whether California would support them with taxpayer funds. His report says that a fund, called "Liquidity Fund Only," could be funded by taxpayers and utility investors. The other source of money, the firefighting fund, could be financed by California's three largest utilities, as well as by some municipally owned utilities.

But these proposals could face resistance from some legislators, consumer groups and forest fire victims. Some of these groups are likely to oppose legislation that protects utility companies from liability, while potentially exposing taxpayers and taxpayers to multi-billion dollar costs.

PG & E shares closed up more than 20% on Friday, a sign that investors believe Newsom's proposals would protect shareholders' investments.

The company welcomed the governor's report in a statement. "We appreciate the important and timely work of the Governor's strike force," said PG & E.

Newsom acknowledged that his plan would require sacrifices and added that this was necessary as fires became more and more common and destructive due to climate change. "We all have the burden and the responsibility to bear the costs," he said.

The magnitude of the plan has impressed researchers working on the financial costs of disasters. "They have developed a number of strategic options that, with some refinements and developments, would be useful," said Carolyn Kousky, Executive Director of the Wharton Risk Center. "But I think they need more details out there."

One of the most controversial parts of the governor's report states that the state should seek to amend a California legal provision that empowers utilities if their equipment causes a fire, even if the companies have not acted by negligence. According to the plan, public services should be held responsible only if they have done wrong, such as not cutting down trees or replacing old equipment. Newsom said that the state could ask the California Supreme Court to seek amendments to this provision, known as a "doomsday" conviction.

However, representatives of taxpayers and forest fire victims have said that the governor's proposal could be to leave public services behind for not maintaining their transmission lines and other equipment.

"If the governor plans to seize the Supreme Court, it would be interesting to develop this policy in town halls where fire victims and taxpayers can express themselves," said Jamie Court, president of Consumer Watchdog.

The bad reputation of PG & E hovers over the report. The company is still on probation following a 2010 gas explosion in San Bruno, just south of San Francisco. A federal jury found the company guilty of violating a pipeline safety law and obstructing an investigation. And PG & E recently said that his equipment probably caused last year's fire, the deadliest in California.

Mr. Newsom's report includes a short section on PG & E accountability. There are limits to what the governor can do to the company. The bankruptcy judge in charge of the case has more influence on the company than Mr. Newsom in many ways.

But Mr Newsom said that he had not ruled out taking action against PG & E if it did not improve security. He added that one solution was to split the company and transform some parts into municipal public services owned and managed by local governments. Officials in San Francisco are already considering a proposal to resume PG & E activities in their city.

Mr Newsom said he was ready to give the company, its new managing director and its board of directors time to make amends. "We have to give these people a chance," he said.