The price of gold has reached its highest level since February and has allowed XAUUSD to return to a positive level. Gold has gained nearly 2% since March 7, as global growth expectations continued to be revised downward. The Federal Reserve has fueled the latest spurt of market pessimism last Wednesday when the The FOMC has released updated economic forecasts reducing estimates of GDP growth for 2019 from 2.3% to 2.1%. 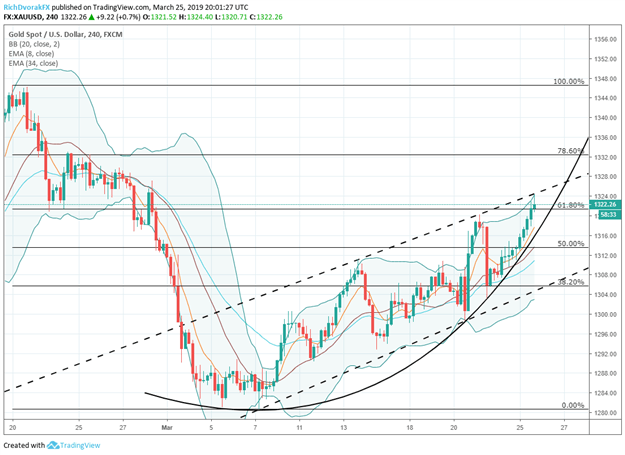 Although stock investors initially celebrated the last dovish position of the Fed and its monetary policy "easy money", Since then, risky assets are under pressure as markets try to determine whether the economic slowdown is temporary or if a recession is imminent. It seems, however, that sentiment has weakened, judging by the soaring US Treasuries. In fact, the 10-year US Treasury yield has dropped from a high of 2.63% last week to 2.42% today, its lowest level since December 2017.

In addition, CME data show that the futures market now predicts a 75% probability that the Fed will reduce its key rate by the end of the year. A lower yield path puts pressure on real interest rates, which reinforces the relative attractiveness of holding gold, with the precious metal being a zero return asset. 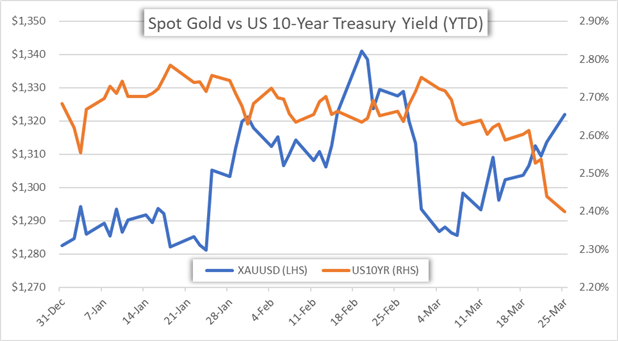 Although long-term rates have fallen significantly, a non-parallel shift in the yield curve – a & # 39; flattening & # 39; when short-term rates rise faster than long-term rates – atcaused parts of the US Treasury yield curve to reverse. Notably, the 3m10s yield curve has just been reversed and is significant because of this event marking a recession in the United States over the next 24 months, seven times out of seven.

As a result, this combination of lower long-term interest rates and increased risk of recession has boosted gold prices. Now that XAUUSD seems to reaffirm its claim beyond technical support near the $ 1,300 price level, the recent parabolic rise could continue. Nevertheless, gold bullion could quickly exit speculative positions and lower spot prices if fundamentals in the global economy begin to improve relative to current expectations.