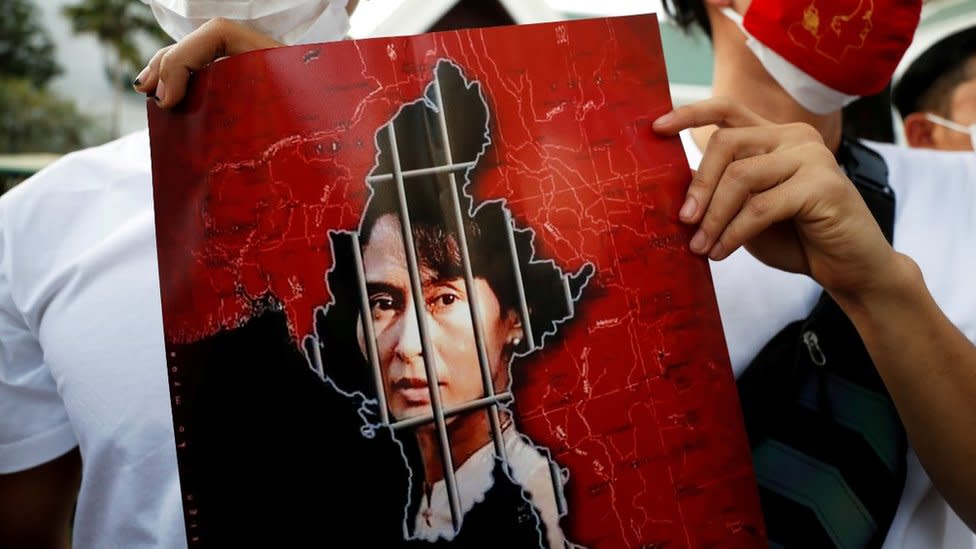 The military seized power in the Southeast Asian nation on Monday after arresting political leader Aung San Suu Kyi and hundreds of other lawmakers.

The coup leaders have since formed a supreme council that will sit above the cabinet.

In Myanmar’s largest city, Yangon, however, signs of resistance and civil disobedience have increased.

Doctors and medical staff in dozens of hospitals across the country are stopping work to protest the coup and to press for the release of Ms. Suu Kyi.

The United Nations Security Council met on Tuesday but failed to agree on a joint statement after China failed to back it. China has the veto power as one of the five permanent members of the council.

Ahead of the talks, UN Special Envoy to Myanmar Christine Schraner strongly condemned the military takeover after the military refused to accept the outcome of the general election held in November.

She said it was clear that “the recent election result was a landslide victory” for Ms. Suu Kyi’s party.

In other reviews, the Group of Seven major economic powers said it was “deeply concerned” and called for the return of democracy.

“We call on the military to immediately end the state of emergency, restore power to the democratically elected government, release all those who are unjustly detained and respect human rights and the rule of law.” , indicates the press release published in London. The G7 includes Canada, France, Germany, Italy, Japan, United Kingdom and United States.

Why has China blocked UN action?

China has warned since the coup that international sanctions or pressure will only make matters worse in Myanmar.

Beijing has long played a role in protecting the country from international control. He considers the country to be economically important and one of Myanmar’s closest allies.

Along with Russia, he has repeatedly shielded Myanmar from UN criticism of the military crackdown on the Rohingya Muslim minority.

“Beijing’s stance on the situation is consistent with its general skepticism of international intervention,” Sebastian Strangio, Southeast Asia author and editor-in-chief at Diplomat told the BBC.

If China is strategically profiting from Myanmar’s alienation from the west, that doesn’t mean Beijing is happy with the coup, he warns.

“They had a pretty good arrangement with the NLD and invested a lot to build a relationship with Aung San Suu Kyi. The return of the military actually means that China now has to deal with the institution of Myanmar which is historically the one. more suspicious of China’s intentions. “

“Through this foreign policy equivalent of gas, China seems to signal its tacit, if not categorical, support for the actions of the generals,” Burmese expert Elliott Prasse-Freeman, National University of Singapore, told the BBC. .

“China appears to be proceeding as if this is Myanmar’s ‘internal problem’ in which what we are seeing is a ‘cabinet reshuffle’, as Chinese state media put it.”

If he thinks that a United Nations declaration would not have made an immediate difference, it would still serve as a “first step towards the coherence of an international response. It does not seem to happen”.

Where is Aung San Suu Kyi?

Aung San Suu Kyi, who headed the now ousted elected government, has not been seen since she was arrested by the military on Monday morning.

Dozens of others are also still detained, including President Win Myint, members of her party’s central committee and her personal lawyer. They would be placed under house arrest.

His National League for Democracy (NLD) demanded his immediate release on Tuesday. He also called on the military to accept the results of the November election, which saw the NLD winning over 80% of the vote.

Meanwhile, the United States has said it has failed to contact the Myanmar military and has officially declared the takeover a coup. This means that the United States cannot directly help the government, although most of its aid goes to non-government entities.

The EU, UK, Australia and others have also condemned the takeover.

Myanmar, also known as Burma, was ruled by the armed forces until 2011, when a nominally civilian government was sworn in.

What is the situation in Myanmar?

Power was handed over to Commander-in-Chief Min Aung Hlaing. Eleven ministers and deputies, including those of finance, health, interior and foreign affairs, were replaced.

At his first cabinet meeting on Tuesday, Min Aung Hlaing reiterated that the takeover was “inevitable.”

The country was calm in the aftermath of the coup, with troops patrolling all major cities and a nighttime curfew in effect.

Myanmar has a long history of military rule, and many people still remember the terror of previous coups.

But on Tuesday evening, car horns and the clicking of pots and pans could be heard in the streets of Yangon in protest.

Activist groups have called for civil disobedience campaigns, creating a Facebook group to organize their efforts.

Staff at 70 hospitals and medical services across the country have reportedly withdrawn from non-urgent work.

Hundreds of health workers, including senior doctors, participated in the “red ribbon movement,” and many put red ribbon on their clothes to show they were against the coup. Online, many have changed their social media profile pictures to a red one.

Myanmar at a glance

Myanmar is a country of 54 million people in Southeast Asia that shares borders with Bangladesh, India, China, Thailand and Laos.

It was ruled by an oppressive military government from 1962 to 2011, leading to international condemnation and sanctions.

A government led by Ms. Suu Kyi came to power after free elections in 2015. But a deadly military crackdown two years later on Rohingya Muslims fled hundreds of thousands to Bangladesh and sparked a rift between Ms. Suu Kyi and the international community.

She remained popular at home and her party won again by a landslide in the November 2020 elections. But the military has now stepped in to regain control.