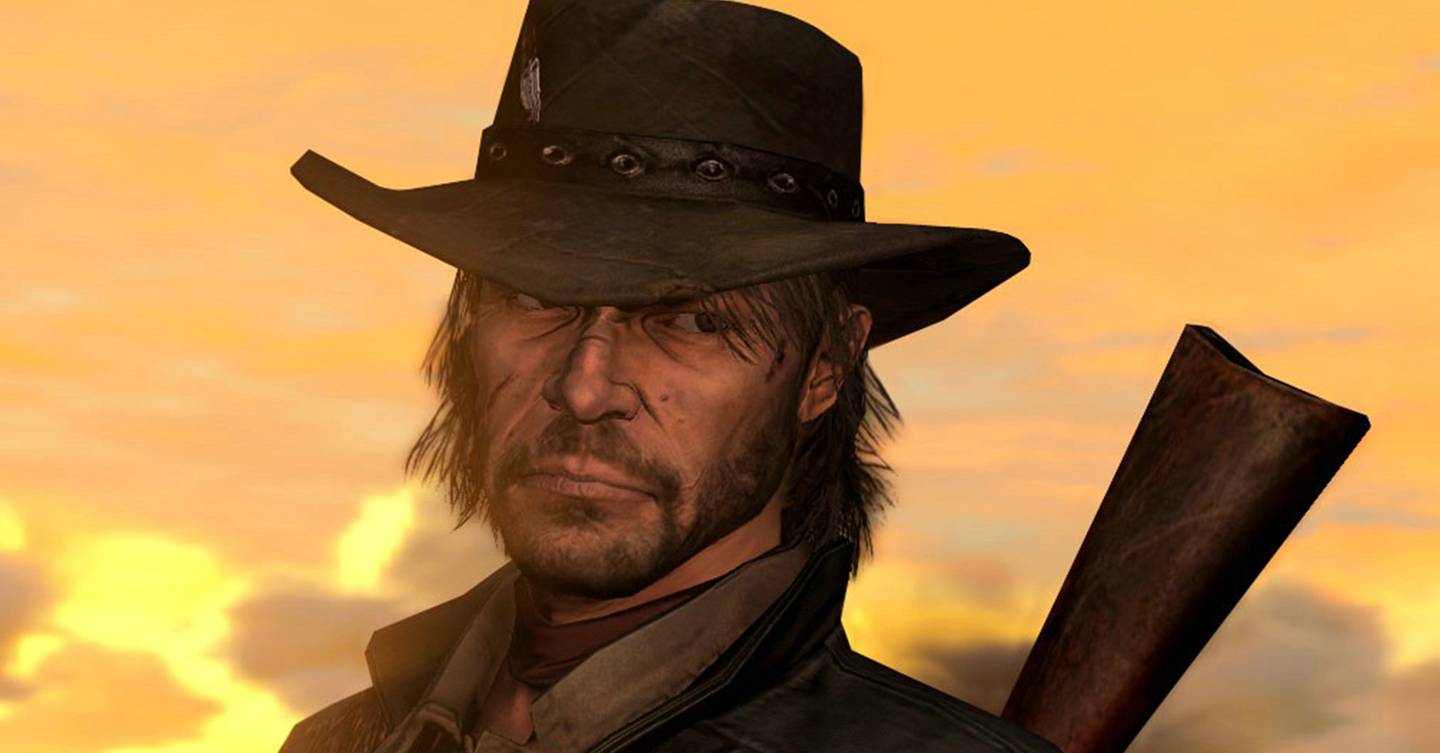 Red Dead Redemption There is no need for introduction. You played it, your friends did it, and although your grandmother may have not tried it yet, there is a good chance she has heard about it. After all, it's one of the most acclaimed video games of all time. It took five years and more than 800 people to create the original game, but one of the main minds behind this project was the chief designer and writer Christian Cantamessa. In fact, his contribution to Red Dead Redemption was so important that he won the Outstanding Achievement In Game Direction Award at the Interactive Entertainment Awards in 2011.

But although he has more than 20 years of experience in the video game industry, one of Cantamessa's passions is cinema. After writing and directed the feature film 2015 AirHe now runs his own company, Sleep Deprivation Labs, which provides creative services ranging from work on video games to film production and comic book writing. When it comes to telling beautiful stories, there is not really any media that Cantamessa can not conquer.

How did Christian Cantamessa become one of the most renowned game designers and writers in the world? In short, hard work, passion and talent for learning complex codes at work. Want the long version to be able to start tracing your own career in the industry? Well, you're lucky: we recently contacted Cantamessa to find out more about his career. From creating successful movies with his kid's camcorder to moving around the world to follow his dreams, this is what has been needed to become one of the most insightful minds in video games.

I was born in Italy and from a very young age I was really passionate about cinema and filming with my friends. I remember trying to do what we saw in the cinema and staging it like little plays. A bit of a mark for me was to see ghost hunters. A few years later, when my grandmother bought me a camera, I started to do it again and again with my friends. I literally transcribed the film on a piece of paper and then went out to take it back. That's when I fell in love with movies and stories.

I went to film school after graduating high school. I had desperately wanted to go to this film school in Rome, but then I thought that it might be better to leave Italy because the movie market was very difficult to break through. I was going to go to London and work there, but some friends of mine were working on a video game called Watchmaker. Video games interested me as a way of telling stories and I was aware of the potential. So, when they asked me to write a story for their game, I thought it might be an opportunity to make money and pay for education. I jumped on it and from that day, I decided to get into video games. I have been doing it for 22 years. Then I joined a company called Ubisoft and then moved to Scotland, where I joined a company called DMA Design, which later became Rockstar North.

"It took me years to acquire the technical skills"

The trip to Rockstar North

I used to work at Ubisoft and went from writing to building levels, but I felt that the product I was working on – a Donald Duck game – was not really phase with my sensitivity. I decided to apply for a job at Rockstar because the development of his new game earned him a negative press. Grand Theft Auto 3. The press could not believe that it could be done in 3D and create a living and breathing world. Online articles said, "It can not be done. It's terrible, "but when I read them, I thought it would be a great time to join the company, because it was something that, if successful, would change the industry. I am happy to have trusted my instinct.

It took me years to acquire the technical skills. I did it step by step. In general, the gaming industry requires a lot of constant learning because the technology evolves very quickly. During my first match, I did not code, I mostly dialogued, wrote, worked with cameras, etc. When I moved to Ubisoft, I learned how to create levels and create gameplay, entertain the player, and then learn to write code. It was a bit of a challenge, but for me everything comes down to telling stories and building worlds. So I applied everything I knew about the movie and the camera, wrote good dialogues, created good characters and applied all that to the video games that I was. create.

The big break (but controversial)

My first big video game was Hunting with the man at Rockstar. I was the lead designer and the writer – I shared the credit with two other writers, but I felt very involved in the scenario. I've also been working on developing all the cutscenes with animators, which has allowed me to go back a little bit back to the age of 13 with my friends, but using some tools digital rather than a VHS camera. Hunting with the man is a very violent game and anyone who plays it or has heard about it probably knows it. For me and the people who worked there, it was more a comment on violence in video games. It was not necessarily trying to sell a hyper-violent video game, but when it came out, not everyone understood what we were trying to do. Recently, the game has been reevaluated from a more mature point of view because I think the industry has now reached a point where games are more capable of delivering powerful statements. Maybe back when Hunting with the man was released the industry was still in its teens.

The rise of Red Dead Redemption

I do not know if anyone anticipated the success of Red Dead Redemption. We did it much more as a work of love than something we hoped to become what it is today. My life at the time was going through a period of considerable transformation. I had just moved from Scotland to the United States. I was immersed in a new team that used advanced technology to create this world. I was in a major responsibility role on the game because I had been the head of Hunting with the man – This team was much smaller and now I was leading a team that was growing by the hundreds. There was a lot of tumultuous change and excitement. I love westerns, so for me, there are so many incredible things happening at the same time that I am swept away by that.

The ambition to bring this world to life in a way that had not been realized before is what sets this game apart from the others I've been working on: the ambition to do something that people say is impossible to achieve or that people would not want. to play. There is literally only maybe another handful of Western games published before the Red Dead Redemption and they were not seen as commercially viable properties. We never thought it would have been geared towards millions of sales. We hoped people would play and really enjoy.

After finishing my work on Red Dead RedemptionI had felt in the industry for a very long time and it was time for me to try something different. So I left the industry a little bit and devoted myself only to the movies. I moved to Los Angeles to get a representation, an agent and a manager and I started writing a screenplay for a film titled Air with a friend of mine, Chris Pasetto. I did a lot of shorts and eventually the planets aligned and David Alpert and Robert Kirkman, the creator of The dead who walk, saw one of them. They became interested in my work and my agent was also in touch with them. My script has landed on their desktop and simultaneously on that of another producer. It started to spark interest and these two production companies eventually joined forces to achieve it and I had the opportunity to lead it.

Around the same time, I created the Sleep Deprivation Lab Lab of my company, which allowed me to provide services to the video game industry and to use it as my own company of production for my film projects. My goal is to turn it into a full-fledged film, television and games production company. I admire creators, writers and artists such as JJ Abrams and Ridley Scott and what they have created with their companies. Bad Robot and Scot Free are incredible environments that are full of creativity and ideas. My dream with Sleep Deprivation Labs is to create something that is inspired by these great people in my own way.

At the moment, I'm sharing my time between film and video games. I like both industries very much and I want to be able to continue to be present in both. There is currently a convergence of all formats, much like a larger construction company of a world, as Netflix has shown with Bandersnatch. I'm definitely interested in how games are getting more and more cinematic and movies are more and more similar to games, but I also like traditional cinema. I am currently working on a few film projects and I hope to be able to set up and announce my next achievement effort as quickly as possible.

Above all, you have to be very passionate. With each creative work, you can frustrate yourself as you try to turn your passion into profitable work because they are in great demand. It is not always the talent that wins; it's the determination to stick to it. There are excellent schools and books on game design and this certainly helps, but I also believe a lot in learning by doing. If you want to get into the game design, you should create a little game. If you have friends who can help you, get together in a small team. Put it there. Use it as a demonstration to show what you can do or just use it to learn, so you have experience with the tools. It's a craft as much as an art, so you have to be a good craftsman. You must know your tools.

The robotist who is determined to turn science fiction into reality

Meet Kilian Hennessy, the extraordinary perfumer who will make you feel sexier

Samsung makes The Frame lifestyle TV even more artistic in 2021