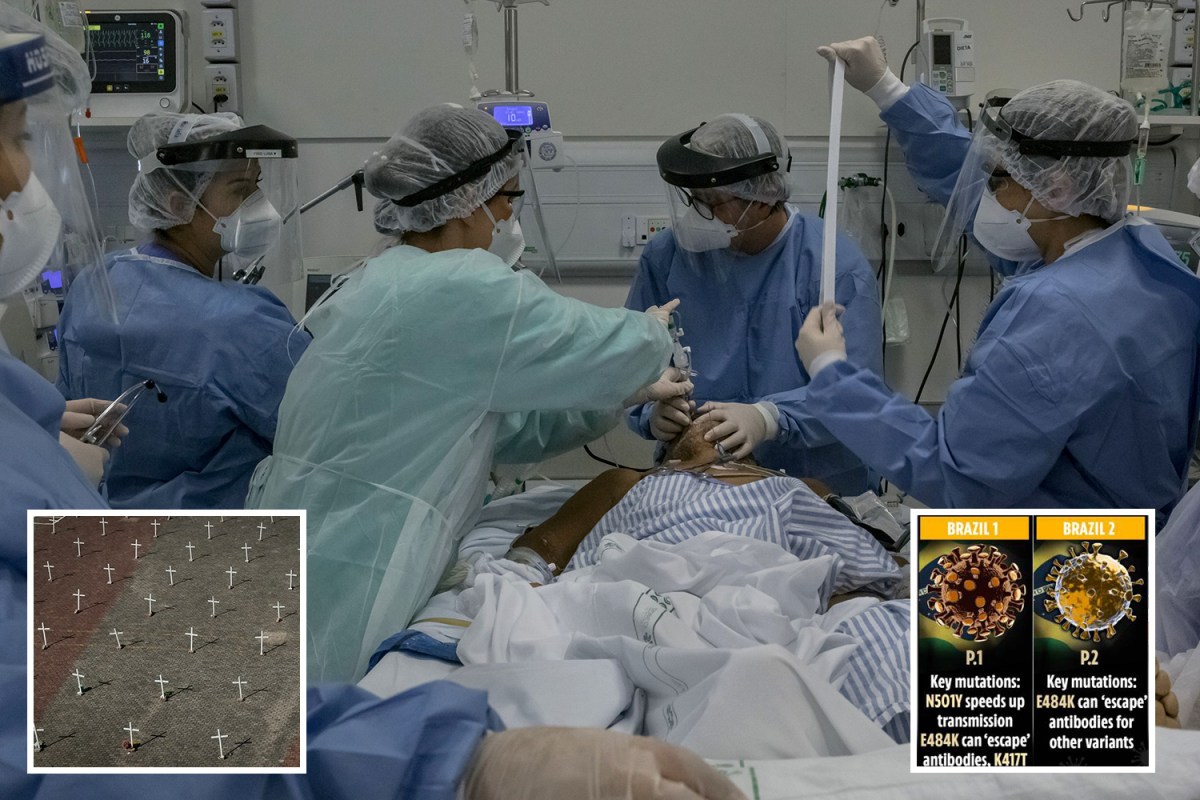 Deaths tripled among people in their 20s in Brazil between January and February, when the variant began to take off in the country.

🦠 Read our live coronavirus blog for the latest news and updates…

The figures are still relatively low compared to the death rates of the elderly.

There has been no change in the death rates of children or adolescents.

The researchers – led by the University of Parana, Curitiba – said the findings “should sound alarm bells”.

They said: “Taken together, these preliminary results suggest significant increases in case fatality rates in young and middle-aged adults after the identification of a new strain of SARS-CoV-2 circulating in Brazil, and this should raise public health alarms. ”

It’s not entirely clear why young people die more from this variant than from the original, scientists have said.

This could be because hospitals are under extreme pressure.

However, the study noted that the increase in deaths coincided with a steady decline in overall cases over two months, suggesting that it is the variant itself that is the most deadly.

The results were published before being reviewed by other scientists on the MedRxiv website.

The new strain, known as P1, has taken off in Brazil, where highs of 90,000 cases are diagnosed per day.

Health systems are on the verge of collapse with more hospital patients than at any time during the pandemic.

President Jair Bolsonaro – who told Brazilians to ‘stop complaining’ about the coronavirus earlier this month – has been criticized for his inability to control the outbreak, described as the ‘biggest genocide’ in the country’s history .

Daily deaths currently represent a quarter of the global total, with around 2,600 recorded each day.

Southern Brazil is seeing a sudden increase in Covid deaths among young and middle-aged adults, which has prompted recent research.

Scientists have already found signals that P1 was deadlier in the city where it emerged – Manaus – but were unable to determine if this was just a coincidence.

A total of 21 cases of P1 have been confirmed in the UK since February. Six others are “probable”.

The threat of the Brazilian variant is not only that it has been shown to be more deadly and transmissible, but that it can evade immunity – either through previous infection or through vaccines.

He has mutations, including one called E484K, that help him avoid antibodies produced by the immune system.

The Manaus study found that up to 60 percent of people who had previously had Covid were “likely” to catch it again with the P1 variant.

It is not known if this will have an impact on the vaccines – which were made against the original Covid strain from Wuhan, China.

A study from the University of Oxford found that the variant did not weaken the effectiveness of vaccines as much as previously thought.

Health Secretary Matt Hancock was asked yesterday if the vaccines would work against the Brazilian and South African strains, and if they did, overseas travel could open up.

When will I receive my SECOND jab? Here’s all you need to know

The photos show what it’s like to live with dementia … so can you spot what’s wrong?

Mutations could make Covid jabs REDUNDANT in “ less than a year ”

He told Philip Schofield and Holly Willoughby this morning: “We’re not sure yet, but we’re doing the science at Porton Down, and we’re watching really closely, and if all goes well, then we don’t have any. problem. and then we will be much more relaxed on international travel. We will know more in the coming weeks. “

There has been growing concern about the spread of South African and Brazilian variants of the coronavirus in Europe as a third wave of Covid-19 sweeps across the continent.

A slew of countries have returned to lockdown or tightened their measures again in response to soaring infection rates.