This article may contain affiliate links; please read the disclosure for more information.

Dave Smith, who founded the Walt Disney Archives in 1970 and was named Disney legend in 2007, has died. He was 78 years old.

Bob Iger said in a statement, "I am deeply saddened to hear of the passing of Dave Smith. This is the unsung hero of Disney's story who, as our first archivist, spent 40 years saving many documents and artifacts from the dark, spending countless hours restoring and preserving these pieces inestimable of our heritage and put them in context to tell our story. Dave was a true Disney legend and we are indebted to him for creating such a durable and lasting connection with our past, which continues to inspire our future. "

His biography, from The Walt Disney Company:

Dave was hired in 1970 by Walt's brother, and co-founder of The Walt Disney Company, Roy O. Disney, and his first responsibility was to list all the elements of Walt's office suite, left untouched after the death of Walt four. years ago. Thanks to Dave's meticulously detailed notes and records, the Archives was able to restore the suite in 2015 and Disney employees can now draw inspiration from this remarkable space for inspiration. While he was the Chief Archivist at Disney, Dave evolved the archives, which became a single-person service and became a model for corporate archives. He was considered by fans and historians as the ultimate authority in Disney history and was an active member of the Society of California Archivists. He served from 1980 to 2001 as Executive Director of the Society of Manuscripts, an international association of collectors, merchants, librarians, archivists and others interested in manuscripts.

A child of librarians and educators, born and raised in Pasadena, California, Dave earned a B.A. Master of Library Science degree from the University of California at Berkeley. Before coming to Disney, he gained experience in librarianship and archival science at the manuscripts department of the Huntington Library in San Marino, California, interned at the Library of Congress in Washington, DC, and was part of Research Library Staff at UCLA

Dave has written extensively on Disney's history, with regular columns in Disney fan publications and websites, as well as on writing, co-authoring, and publishing numerous articles and books on Disney's story, including Disney's official encyclopedia. Disney from A to Z, Disney: The first 100 years, the Walt Disney quote, Disney Trivia of the Vault, and The Ultimate Disney Trivia Books 1, 2, 3, and 4.

In October 2007, Dave received the prestigious Disney Legend Award. A resident of Burbank, Calif., Dave retired in 2010 after his 40th birthday with the Walt Disney Company and continued working for nine years as a consultant for the company, with the title of Chief Archivist. emeritus. 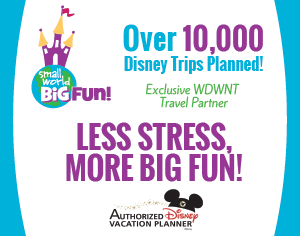 I do not know about you, but sometimes it's hard to plan a Disney vacation! There are so many options, where to stay, when to go, is it the best price? So I want to introduce everyone to Cindy Minor and the Small World Big Fun team. They will help you plan your Disney vacation for FREE. Contact them today!