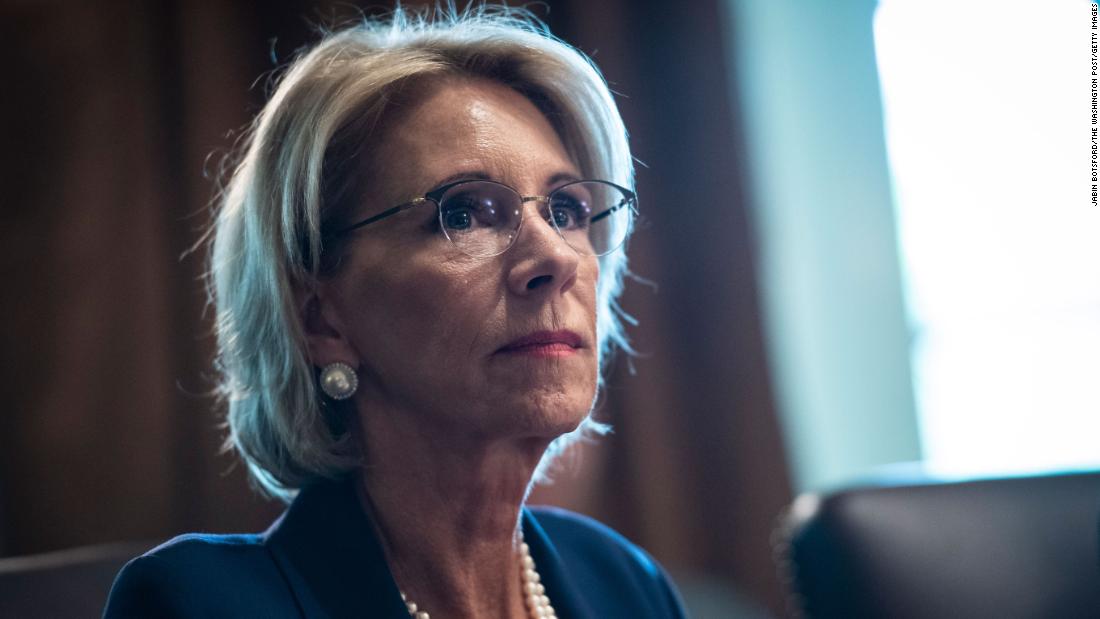 The stake is a letter dated January 3, addressed to the Ministry of Education's watchdog by the department's assistant secretary, Mitchell Zais, who was quoted by the Democrats and then released by the ministry.

Zais wrote that it was "disturbing" that the Inspector General "appears to be responding to a congressional request that is really a disagreement on the policy and the merits of the department's decision." Zais then asked Interim Inspector General Sandra Bruce to "reconsider any project that would allow her to review the department's 2018 and 2018 decisions," adding that if the office felt that a "review is warranted "It should also consider the fact that the Obama administration had not considered significant evidence in its decision.

"The Ministry of Education, under the leadership of Secretary General DeVos, will never seek to undermine the independence of the Inspector General," Hill said. "Anyone who insinuates otherwise would do so without any basis of fact and only for political ends."

Hill added that discussions for the appointment of a new Inspector General began when the previous one, Kathleen Tighe, announced her retirement in October 2018. She said the choice of department, which had been canceled, had been "operated on the merits and aimed to provide direction."

In December, the Office of the Inspector General of the Department of Education announced that it would consider the issue of the reinstatement of the accreditation agency as a result of. a request from Democratic members of Congress. On January 30, the Trump government proposed to replace Bruce by Assistant Education Advocate Philip Rosenfelt, whom Hill described as "a highly respected public servant for 48 years." On February 1, the White House and the Department of Education overturned their decision.

"As we learn more about this inappropriate nomination and the surrounding events, we are increasingly concerned about the department's efforts to influence the independence of the OIG and the critical work of this office," Democratic members wrote. of Congress. "In particular, we are disturbed to learn that the decision to remove the Acting Inspector General, Bruce, had been preceded by a request from the ministry asking the OIG to abandon the company. • Re-establishment investigation by Secretary DeVos of the Independent Colleges and Schools Accreditation Council (ACICS) or alternatively "Focusing Investigation on Departmental Decisions Under the Obama Administration".

Last year, the Trump administration reinstated the Accreditation Council for Independent Colleges and Schools, which would have approved about 240 colleges and $ 4.7 billion in federal funding before the Obama administration decided to derecognition of national accreditation at the collapse of large for-profit colleges such as Corinthian Colleges. and ITT Technical Institute.

The letter to DeVos was sent by Bobby Scott, Chair of the House of Representatives Committee on Education and Labor, Senator Patty Murray, Senior Senator of the Senate Committee on Health, Education, the and retirements, House Watch Committee Chair Elijah Cummings and Senator Gary Peters of Michigan. Rep. Rosa DeLauro from Connecticut.

The appointment of one of the department's top lawyers as departmental investigations officer for potential wrongdoing had raised concerns within the watchdog office and at Capitol Hill.

A few weeks ago, Scott, DeLauro and Murray sent a letter asking the department for more information on how the decision was made, which Democrats repeated on Tuesday.

Ross Levitt and Ellie Kaufman of CNN contributed to this report.