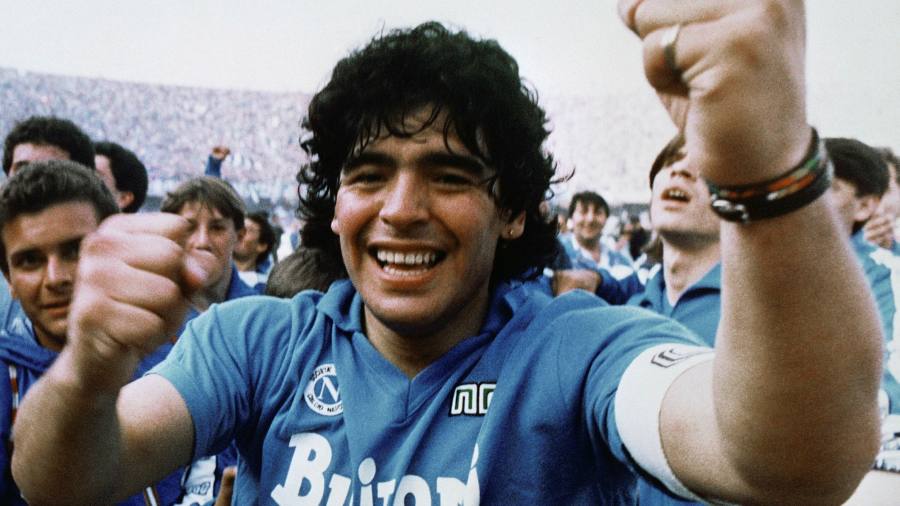 Diego Maradona, all 1.65 meters from him, played with the joy of the individual beating the system. The most charismatic and least professional of great footballers, he was also the only one to win a World Cup almost on his own, with a second-rate Argentinian side in Mexico in 1986.

Born in 1960, he grew up outside Buenos Aires in a cabin without running water where photos of Juan and Eva Perón adorned the walls. He shared a room with seven siblings and once survived a fall into an open cesspool. A pair of turquoise corduroys was his only pants.

When he emerged as a teenager, Argentine football fans immediately recognized him as the ideal they had carried in their heads since the 1920s: the child (boy) fed on the Potrero (bumpy urban plot) that dribbled with the creativity that would have sprouted from a child’s imagination.

He made his debut for Argentina at the age of 16, saved his family from poverty and became the public property of his compatriots, who seemed to expect him to redeem the failed nation in other kingdoms. His first World Cup, in 1982, ended with a dismissal for karate to Brazilian player Batista. It was a mistake: he had wanted to kick Falcão instead.

He failed at Barcelona, ​​his ankle destroyed by a Basque defender. Maradona suffered some fouls that would see him win instant red cards today. He made it through the 1986 World Cup in Mexico on painkiller injections, wearing one boot several sizes larger than the other as his bad ankle swelled during games. Nothing stopped him. This tournament was the highlight of his career and the quarter-final against England was the exhibition game. Very early on, he scored with his hand, which he then waved to the crowd in celebration. Then, with characteristic savage poetry, he attributed the purpose to “the hand of God”. In his defense, the English also cheated, giving him kicks and elbows throughout the game.

Four minutes after the hand of God, he scored what is widely regarded as the ultimate goal of any World Cup, a dribble past six Englishmen. In the showers that followed, his teammate Jorge Valdano teased him: throughout the race, Valdano had claimed the ball, why hadn’t Maradona passed? I was watching you, replied Maradona, and I was trying to pass, but the English were on the way, and suddenly I had beaten them all, so I just scored. Valdano was impressed: “By scoring that goal, were you looking at me too? Old man, you insult me. It is not possible. Maradona later confessed that he sometimes preferred the treated objective: “It was like stealing the wallet from the English.”

A nationalist and anger-motivated footballer, he said in his autobiography that victory avenged Argentina’s defeat in the Falklands War four years earlier, when British soldiers killed his compatriots “like little birds”. He added: “It was like we beat a country, not just a soccer team.”

Maradona was adored in part because he didn’t look like a great footballer. The crafty kid was a David beating Goliath. Winning the World Cup made him an Argentine icon. As extrovert as he was, he felt besieged by the crowds surrounding him everywhere. He hated to be touched. His dream of “returning to my country and being left in peace” never came true.

His club career culminated in Naples, a poor chaotic town that embraced him like a lost son. The Naples Italian titles in 1987 and 1990 were the only ones won by a team south of Rome in the past half century. Most of the teammates loved him. As with Argentina, he played without complaint with mediocrity, even applauding passes sent a few yards behind him. Once he had the ball he could do the rest on his own.

During this time, he became addicted to cocaine. After losing the 1990 World Cup final, he blurted out conspiracy theories about FIFA, the world’s footballing authority. Still the main character at every World Cup, in 1994 he was sent off mid-tournament for taking ephedrine, a performance enhancing drug. His life and weight got out of hand. He yearned to get up in the morning and take his daughters to school, his teammate told me, but he almost never could. His death had been announced since the thirties.

An instinctive leftist populist who felt guilty for being rich, Maradona had Che Guevara’s face tattooed on her arm, saying: “It is time for the two greatest Argentines to be united in the same body. He befriended Fidel Castro, and in baseball-obsessed Cuba, he briefly found the peace he sought.

He watched the 2006 World Cup as a fan wearing a replica Argentina jersey, jumping in rhythm through the stands with his compatriots. No other great player could have done it, but Maradona was Argentina. In 2010 he coached Argentina for the World Cup. He participated in a training game while smoking a cigar, appointed a friend as an assistant, harangued reporters and harassed gays at press conferences, and vowed to run (or waddle) naked in Buenos Aires if the Argentina was winning. But they crashed 4-0 against Germany, while a bewildered Maradona wept on the sideline. After that, no big club would use him. In the end, he was training the humble Gimnasia in Argentina.

He was undergoing treatment for his alcohol addiction and underwent brain surgery earlier this month and then suffered a fatal heart attack. Argentinian heroes are expected to die prematurely, giving their flesh to the nation: Carlos Gardel, Eva Perón, Che and singer Rodrigo Bueno. The pandemic denies Maradona a burial equal to that of Evita. Argentina has declared three days of national mourning.

Florida bids for Olympics if Tokyo backs down

What we know about the Kobe Bryant crash a year later

Serena Williams thinks some of her trophies may have been stolen

Jamal Murray of the Nuggets wins a quick ejection against Mavericks after taking a cheap shot on Tim Hardaway Jr.’s groin.