Does Utah see a drop in COVID-19 cases? 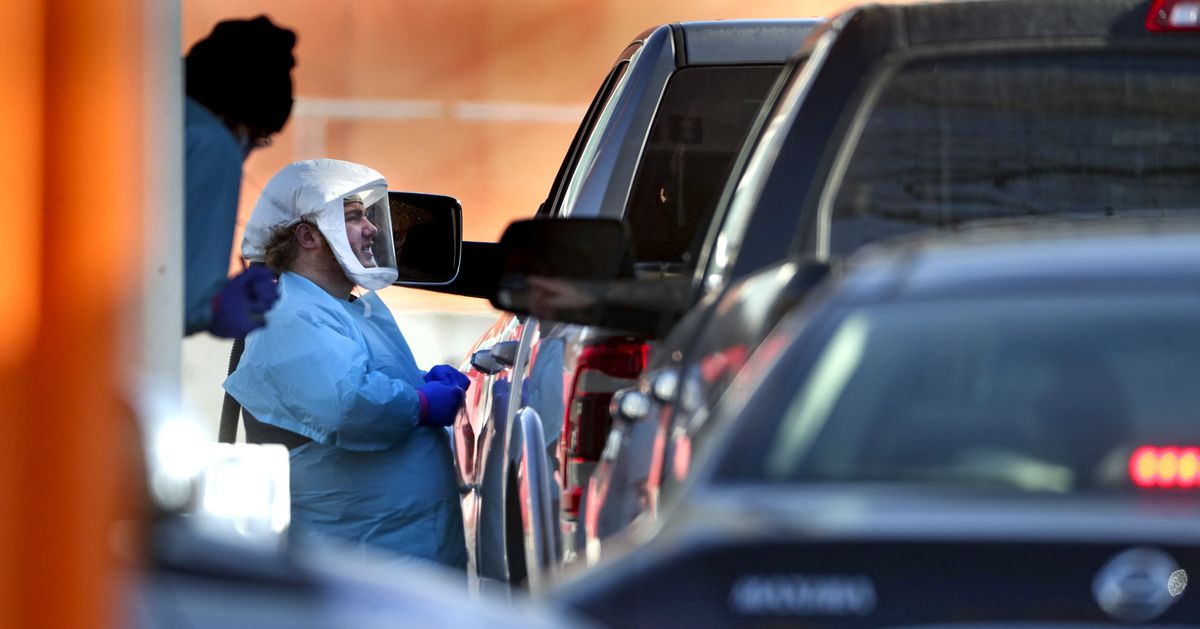 “I think it’s too early to tell. … I think we started the downtrend before the holidays, and now we’ll have to wait and see how vigilant people were during Thanksgiving to stop and slow the spread of the virus, ”said Erin Clouse, head of strategic engagement for health sciences at the University of Utah Health, who is also working on projections for the hospital system.

“We should also look at the number of tests done,” as fewer people tend to get tested during holidays and weekends, said Dr Todd Vento, infectious disease physician at Intermountain Healthcare.

Test centers were also closed on Thanksgiving Day, and some offered reduced hours on weekends.

Utah health officials reported an additional 1,897 cases of COVID-19 out of 4,852 people tested on Monday, with a positive rate of 39%. The seven-day moving average for new cases is 2,312 per day and the average rate of positive tests is 21.5%.

A week earlier, the state’s moving average was 3,349 cases per day and the average rate of positive tests was 23.6%. On Nov. 11, Utah’s average seven-day positive test rate was around 25%, Clouse noted.

The drop in the positivity rate correlates with restrictions put in place this month when Gov. Gary Herbert implemented a universal public mask mandate that will continue until further notice and put in place a two-hour hiatus. weeks of the occasional social gatherings that ended on November 23.

“We are also seeing a decrease in the number of new daily hospital admissions,” Clouse said. “So we are seeing an overall decrease in the disease. What we haven’t seen yet is the impact of the Thanksgiving holiday. “

People tend to get infected between five and seven days after being exposed, but the incubation period can last up to 14 days, Vento said. Typically, patients are admitted to the hospital within two weeks of the onset of their symptoms.

“Right now we have been very high but stable in terms of numbers in terms of hospitalizations both at our medical centers and at our small community hospitals across the state in Intermountain,” Vento said.

“But we will certainly be concerned and are watching closely what will happen in the week and the next two weeks.”

Vento and Clouse have both expressed concern that Thanksgiving and the upcoming holidays are largely held indoors, increasing the risk of the disease spreading.

“What I saw and what worries me is that all of the major vacations up to this point were mostly outside – July 4th, Memorial Day – all of these vacations were outside, in the great outdoors. This is the first vacation where most of the activities take place indoors. And we know that with proper ventilation if you’re outside, it decreases the spread, ”Clouse said.

“So now that we’re inside, unless people really take the public health warnings and stay home and come together as multiple household units come together, this has the potential to be one. big spreading event throughout the holiday season, ”she said.

Vento said those who travel for gatherings end up spending time with those from other households for several days in a single household, “which makes the transmission event even more likely to be high in number in terms of infected people.

Clouse urged people to imagine themselves “back in March” and take the precautions they took at the time – except to stock up on toilet paper.

About 1 in 50 people in Utah currently carry the virus, she said. But in the younger age groups where the virus is most prevalent, about 1 in 34 people are infected with the virus.

“Don’t be tired. There is now a higher risk of spreading the virus than there was in March, ”she said. “We really took the warnings seriously in March. We must continue to do so now.

On Sunday, Dr Deborah Birx, coordinator of the White House Coronavirus Task Force, urged young people who traveled for Thanksgiving to assume they have been exposed to the disease and get tested.

“If you’re young and you get together, you should be tested about five to ten days later,” Birx said on CBS’s “Face the Nation,” warning those who traveled on Thanksgiving to avoid visiting. older parents.

Vento agrees with this advice.

“In this situation… treat yourself like you’re in a quarantine situation,” Vento said. “I certainly think it would be safe to assume that you might have been infected. And remember that most infections are not symptomatic. “

He also encouraged those who shared Thanksgiving dinners with others “whom you may not be as aware of in terms of their practices, their risks to their own exposures and infections, it would be safe to assume that you could be infected ”and avoid interactions with others who are at risk.

Herbert’s latest public health ordinance requires colleges, trade schools, and universities that are part of Utah’s higher education system to test students who attend at least one in-person class each week or who live on campus every two weeks. Testing is due to start no later than January.

The state’s largest universities received rapid antigen tests to begin the effort before Thanksgiving. Now, schools that did not immediately receive testing supplies from the state have also started testing students.

Asymptomatic tests at Southern Utah University are administered on a first-come, first-served basis by appointment, according to university officials. Snow College begins its tests in the first weeks of December without an appointment.

Vento said Intermountain has managed its caseloads through its contingency planning measures – “load leveling”, moving patients between hospitals with capacity, and bringing in emergency department doctors to treat. COVID-19 patients, which they normally wouldn’t do.

If needed, the state remains ready to set up a makeshift hospital at the Mountain America Expo Center in Sandy. But for now, state officials are also waiting to see what the state’s numbers look like in the coming days, said Joe Dougherty, spokesperson for the Utah Emergency Management Division.

The three deaths reported on Monday bring the state’s death toll to 871. They were: a man from Uintah County between 45 and 64; a woman from Utah County between the ages of 65 and 84; and a Washington County woman over 85. All three were hospitalized when they died.

To date, 195,706 cases have been confirmed out of 1,423,079 people tested, with a positive rate of 13.8%. About 134,000 cases are considered cured after surviving the three week point since diagnosis. Hospitalizations since the start of the pandemic now total 8,135 people.