FEATURE: Barack Obama is expected to Cameron for the Duke-North Carolina match, no official confirmation 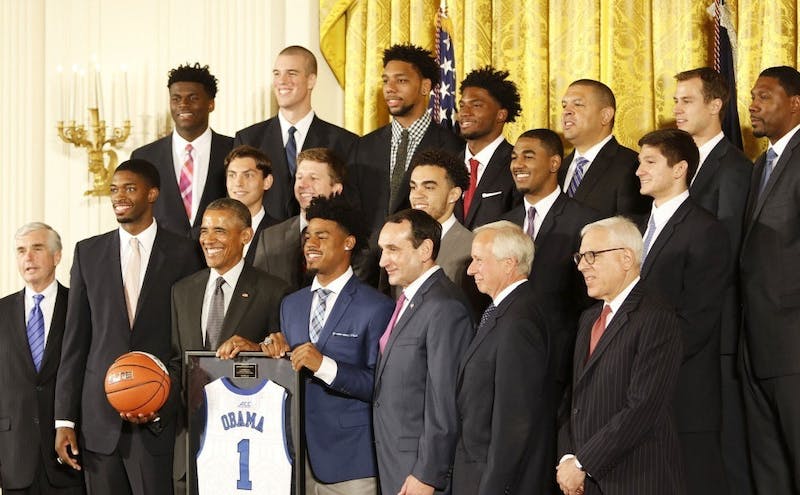 Reports say that one of America's most famous men is expected for one of the biggest sports rivalries on Wednesday night.

According to Inside Carolina and Adam Zagoria, Barack Obama, the 44th President of the United States, is expected to visit Cameron Indoor Stadium for the Blue Devils game against North Carolina this week.

Duke has not yet officially announced the arrival of Obama and The Chronicle has not been able to independently confirm it.

When asked if Obama would appear, Michael Schoenfeld, vice president of public affairs and government relations, declined to comment. Jon Jackson, assistant director of sports, and Mike DeGeorge, sports information director, did not respond to requests for comment.

Obama would be the first president to surrender to Cameron since the death of George H.W. Bush has witnessed a 95-to-60 overthrow of N.C. state in 2014.

Zagoria was the first to announce the news early Monday morning and Inside Carolina claims to have confirmed the plan on Tuesday morning.

Obama's love for college basketball is well documented and, when he was on the job, choosing his choice among the NCAA tournaments for ESPN was an annual tradition. It also has links with both Tobacco Road programs. In his first presidential campaign in 2008, he played with the Tar Heels at Chapel Hill and played regularly with the longtime help, Reggie Love, which was a reserve for the Blue Devils. the national title 2001.

While he was president, Obama saw Duke himself once during his visit to Washington to play Georgetown in 2010. The Hoyas eliminated the Blue Devils in this match, leading by 23 before winning 89-77 but Duke had the last word with his fourth national title three months later.

Since he left office in January 2017, Obama has generally stayed away from the spotlight, spending time traveling the world and giving speeches on the occasion.