Fight the disease by giving an anti-mosquito mosquito 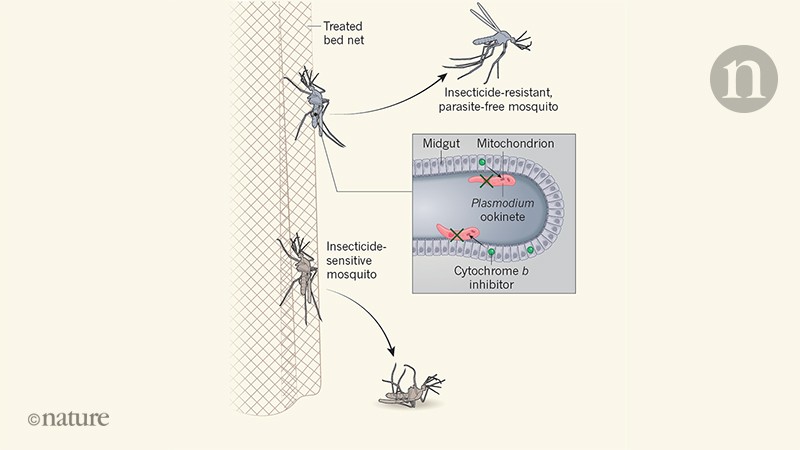 Any long-term disease control program that relies on one type of intervention has a high probability of failure because of the development of resistance to treatment. Efforts to limit malaria by using insecticides to kill female mosquitoes, which transmit the virus Plasmodium Parasites are no exception: insect resistance to insecticides is increasing. Write in NaturePaton et al.1 report a non-insecticide intervention that prevents mosquitoes from transmitting malaria and may offer a way to reduce reliance on insecticides alone as a means of preventing malaria. It is estimated2 Mosquito control with long-lasting insecticidal nets called pyrethroids and indoor insecticide spraying reduced the number of cases by 1.3 billion. malaria and 6.8 million deaths between 2000 and 2015. However, despite these intensive efforts, a report published in 20183 by the World Health Organization (WHO) indicates that between 2015 and 2017, global efforts to reduce the burden of malaria are stalled.

The report highlights a funding gap that has prevented universal coverage of bed nets, where appropriate, and increased resistance to antimalarial drugs and insecticides. He also mentions the limited data available on insecticide resistance and indicates that the impact of pyrethroid resistance on the effectiveness of current pyrethroid interventions is poorly understood. Although the report says that such increasing resistance will likely reduce the effectiveness of current interventions, it downplays the potential impact on the use of pyrethroid-treated mosquito nets, saying that mosquito nets, which were responsible4 about 68% of the estimated reduction in malaria transmission since 2000, continue to be effective. Unfortunately, this optimism seems misplaced, as increased resistance to insecticides affects the level of disease transmission.

Given the urgent need to expand the range of effective interventions, Paton et al. to suggest a way forward for the development of new-generation malaria bed nets. They tested if Plasmodium falciparum, the main parasite responsible for malaria in Africa, could be killed by exposing mosquitoes to antiparasitic drugs used to prevent malaria. These work by targeting the mitochondria – organelles generating energy.

The authors discovered that the antimalarial drug atovaquone, which inhibits mitochondrial protein cytochrome b – as well as other types of cytochrome b Inhibitor drug – could kill parasites in a mosquito host. Exposing the mosquitoes for six minutes to a glass surface covered with low doses of the drug was enough to have an effect. It is in the time period during which wild mosquitoes are deposited on the mosquito nets. This discovery is important because, after more than a century of research and small biological or environmental control projects, it is clear that non-insecticidal interventions do not contribute substantially to efforts to reduce malaria transmission.

Paton and his colleagues suggest that antimalarial drugs could be incorporated into mosquito nets alongside insecticides (Fig. 1). Their modeling predicts that this would reduce the prevalence of malaria, the magnitude of the impact being influenced by the levels of disease transmission, the number of people using mosquito nets and the degree of resistance to malaria. insecticide. The increased effect of adding the antimalarial drug to insecticide-treated nets is particularly striking in the authors' models when bed net use is 70-100%, highlighting the need to search for insecticide-treated mosquito nets. high levels of net usage even if the compounds used for treatment nets change in the future.

Malaria can not be controlled or eliminated in a sustainable way without effective mosquito control. Paton and colleagues' approach fits well with WHO's global insecticide resistance management plan7. This suggests that a multi-dimensional approach should be used and that progress will depend on efforts to reduce the cost of bringing new drugs to market and streamlining associated development, policy and implementation milestones. .8.

While Paton's and colleagues' approach is promising, there are significant hurdles to overcome before creating a product that is universally accepted and accepted by donors, countries, and communities for use in control programs. Significant work will be needed to optimize drug development and produce sustainable formulations. In addition, evaluations of the drug's manufacturing process should be undertaken, as well as the potential for drug resistance and the cost and public acceptability of this approach.

The WHO has a system called prequalification, in which a product intended to solve a health problem must meet certain specifications before it can be placed on a list that can be selected by the donor organizations. In addition, countries have product recommendation systems that take into account proposed interventions and establish the burden of proof to determine whether a WHO recommendation is warranted for use in that country. Completion of these steps is a long and difficult process. For example, the first PBOs were ready-to-sell products, with an interim WHO recommendation ten years before the publication of the first WHO advice on where and when this type of net should be used.2. The combined development, regulatory and other processes involved can create a 20-year break before a new technology enters the market and is used on a large scale. Substantial efforts and funding will therefore be needed to quickly assess whether the approach suggested by Paton and his colleagues could play a role in reversing the current upward trend in malaria transmission.