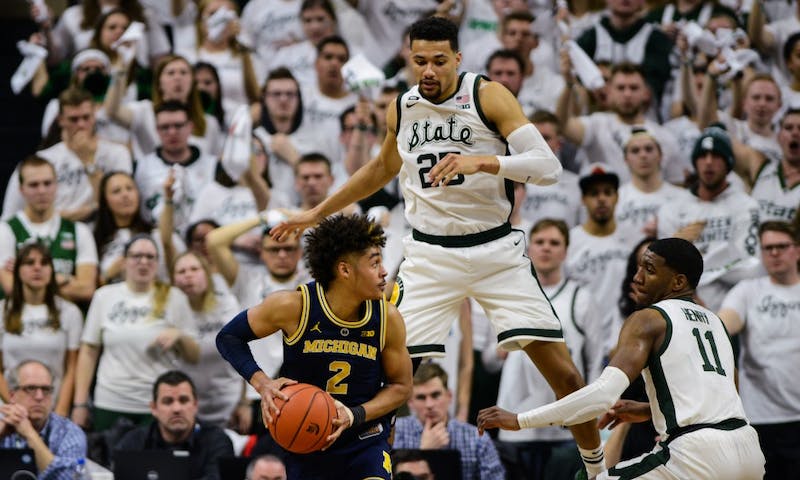 Only one team could win.

Part of the Big Ten championship game was made even more enjoyable with the sending of seniors and the right to boast against his rival, Michigan State, with a 75-63 win at the Breslin Center on Saturday night.

Leader Cassius Winston scored the highest point of the match with 23 points. Xavier Tillman followed Winston with 17 and six rebounds.

Ignas Brazdeikis wore the Wolverines with a score of 20 points, the highest on the team, but missed the mark at 5:10, at the end of the big race of MSU.

The Wolverines led up to 12 points after a Zavier Simpson rider was crowned 6-0 to give U-M a 35-23 lead with 3:12 to go in the half. The Wolverines who were shooting hot, however, were held 0-to-6 off the ground and did not score the rest of the half. The shot allowed MSU to run 6-0 to enter at halftime, pulling from the back at 35-29.

The race went entirely without Winston, who played in the final 7:34 after committing his second foul.

Michigan shot 57.7 from the ground, but ended the half by scoring 15 of its 30 placements, including five. The Spartans went into the break scoring twice in 10 of the depth and 9 out of 22 on the field. .

After the two teams combined to start the second half on a field out of 9, MSU made five of its next six shots – including a 3 from McQuaid, Goins and Winston – to start the 26-to-5 series. striking 66-53 with 7:45 to play.

McQuaid put the game away on a high note with a two-handed dunk in transition with 1:13 left. That gave MSU a 73-61 lead and scored the last goal on the senior pitch before he and Goins kissed Spartan's head in the middle of the field, a tradition for the starters.

MSU and U-M are absent until next Friday, when each team starts the Big Ten tournament at the United Center in Chicago.