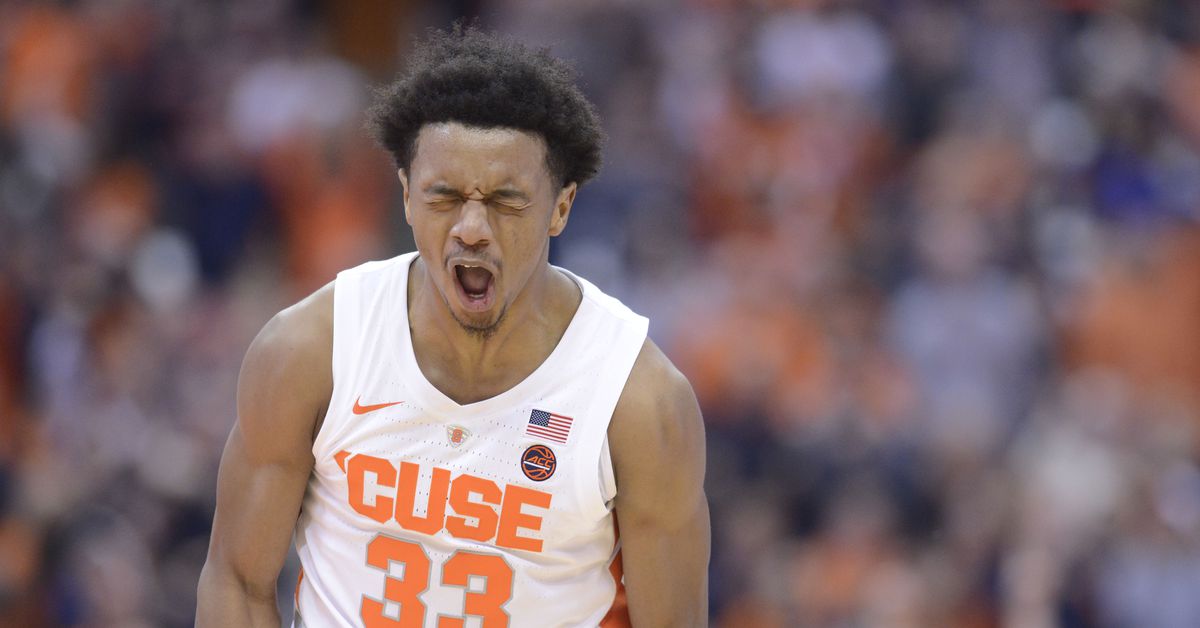 The Syracuse Orange entered a precarious position Wednesday night, needing a win to feel good against the hopes of his NCAA tournament. Lose, and the task becomes more difficult because you almost certainly have to win a victory against Duke, North Carolina or Virignia. Instead, the Orange won a third quarter of an hour, a win, by facing the Louisville No. 18 Cardinals 69-49.

Syracuse stifled the cardinals' offensive by cutting all three (Louisville 5:27) and forcing 13 turnovers. Louisville had reduced the advance to 15 minutes with 9:17 to go and Jordan Nwora was running in a menacing transition to 12 years. Chukwu too.

He jumped, blocked Nwora and the two men fell to the ground.

As Chukwu turned and slowly stood up to pursue his team-mates well in their offensive set, the Carrier Dome rose to a standing ovation. Moments later, he plunged back to the ground, catching a ball that fell from Buddy Boeheim's hands and forcing a jump ball. Boeheim struck three seconds later and the cardinals never again threatened.

Nwora and Louisville tried to break the area earlier with lateral moves, but resisted offensive rebounds. Dwayne Sutton caught a pair in front of the Orange back line, giving both defeats to Nwora, who scored the only goal of Louisville's first six attempts.

SU weathered the outside better, quickly converting Oshae Brissett to the left wing and otherwise using the descent to generate six free throws in the first eight minutes. Paschal Chukwu was late in the lineup after Frank Howard agreed to Tyus Battle for the pass, earning two points on the line. Elijah Hughes worked for the post and Marek Dolezaj opened the scoring to score six of Orange's first eleven on the line.

Syracuse 's focus is on the three and the layups, Marek Dolezaj and Hughes eliminating four consecutive fouls on the outside in the range of shooters led by Battle. But the Orange took a 19-12 lead after Dolezaj plunged into an offensive rebound to recover the arrow from possession, Brissett cashed in the check and Buddy Boeheim finally opened the cover with a three on the # 39, left wing.

SU took a double-digit lead with Boeheim on the ground, which started the race by stealing the pass from Darius Perry and nudging after an offensive rebound from Dolezaj at the other end. Both illuminated the dome; Dolezaj followed with another defensive bounce on the defensive side that pushed Hughes to run in the opposite direction to break his series of three colds.

The pressure in the Syracuse area has increased along with the volume in the Carrier Dome. Kwhan Fore is stuck in the right wing and almost lost the ball. Nwora lost it while he was blocking inside against Dolezaj. Hughes pushed Cunningham to prepare three more for Brissett, who managed to deceive Hughes' half-half for another try out of three before the ring. Hughes hit two of the three before the bell rang to hit the locker room in front of you 35-23.

Syracuse blocked Louisville in the second half, allowing his team to dry out of the drought in the first five minutes, but Brissett opened the offense by scoring Cunningham up to the rim with the shot clock running out . Battle stripped Cunningham soon after to get an open dunk. He then hit two free throws after turning inside the ledge, then hit Hughes for three and a 44-28 lead.

Meanwhile, the Cardinals have embarked on a stretch of 0 to 8 in almost seven minutes, recovering only one point at the free throw line. The race gave Syracuse an advantage of 19 points before Nwora and Ryan McMahon reached a double and three before the halfway mark.

They nearly returned to a 12-point game after the halfway point of the second period, when Chukwu chased Nwora from behind after a failed game by Battle. The stop would have brought Louisville a strike distance, but Chukwu has dismissed. He stumbled on the ground and plunged onto a loose ball that Boeheim had originally lost. Boeheim got three points on second-chance possession and a 53-35 lead.

Syracuse can now count on Duke, the No. 1 team in the country, going to Carrier Dome at 18h. Saturday in front of what should be the biggest crowd in NCAA basketball history.