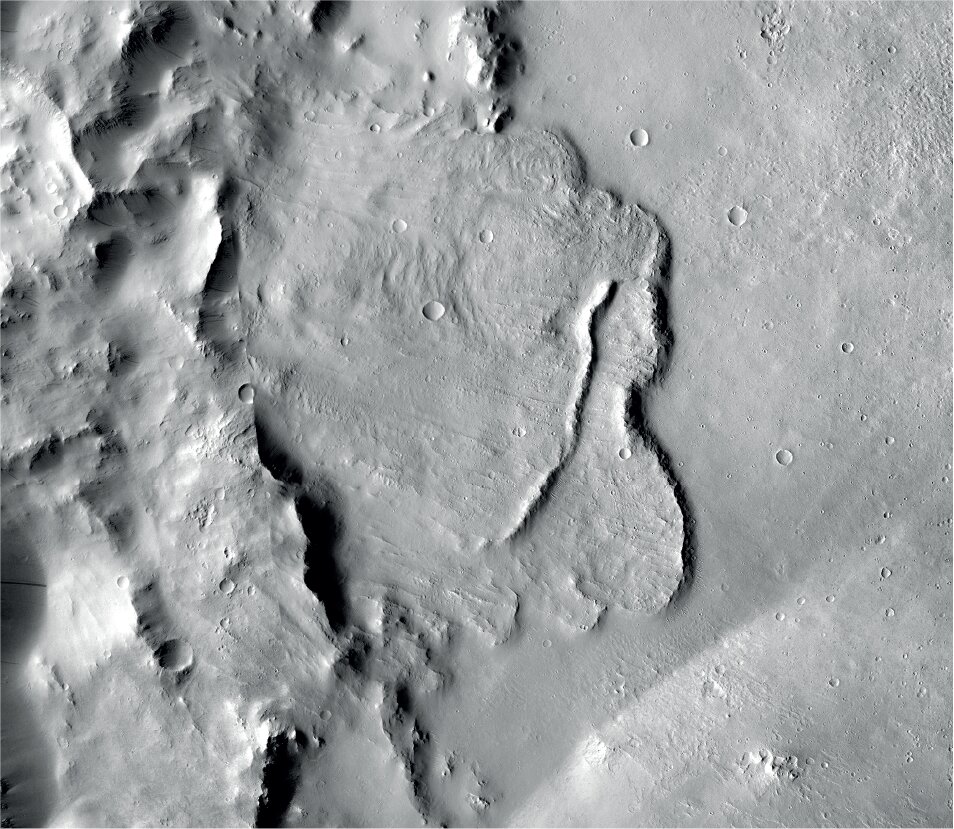 Mars Express revealed the first geological evidence of a system of interconnected ancient lakes that were once deep beneath the surface of the red planet, five of which may contain minerals essential to life.

Mars seems to be an arid world, but its surface shows convincing signs of the existence of a large amount of water on the planet. We see features that would have needed water to form – branched outlets and valleys, for example – and last year, Mars Express detected a reservoir of water. liquid water under the south pole of the planet.

A new study now reveals the extent of groundwater on ancient Mars, which was previously only predicted by models.

"Early March was an aquatic world, but as the climate of the planet had changed, this water had been withdrawn beneath the surface to form pools and" groundwater, "said lead author Francesco Salese of the University of Utrecht, the Netherlands.

"We traced this water in our study because its scale and role are the subject of debate, and we discovered the first geological evidence of an underground water system at the site. scale of the planet on Mars. "

Salese and his colleagues have explored 24 deep closed craters in the northern hemisphere of Mars, with soils located about 4,000 m below the level of the Martian Sea (a level that, given the lack of seas on the planet , is arbitrarily defined on the basis of altitude and the atmosphere (pressure).

They found features on the soils of these craters that could only be formed in the presence of water. Many craters contain multiple features, all located at depths of 4,000 to 4,500 m, indicating that they once contained pools and streams of water that changed and retreated over time.

Features include crater-walled channels, valleys carved out of groundwater, dark, curved deltas that would have formed as water levels rise and fall, ridged terraces within crater walls formed by stagnant water, and water.

The water level is lining up on the proposed shores of an alleged Martian ocean that would have existed on Mars between three and four billion years ago.

"We think that this ocean could be connected to a system of underground lakes spreading all over the planet," adds co-author Gian Gabriele Ori, director of the International School of Research and Development. Planetary Sciences of the University of Annunzio (Italy).

"These lakes would have existed about 3.5 billion years ago, so they could be contemporaries of a Martian ocean.

The history of water on Mars is complex and intimately linked to the understanding of whether life was born there – and if so, where, when and how it did it. .

The team also spotted traces of minerals in five of the craters related to the emergence of life on Earth: various clays, carbonates and silicates. The discovery adds weight to the idea that these basins on Mars may have already had the necessary ingredients to accommodate life. In addition, they were the only basins deep enough to intersect for a long time the part of the crust of Mars saturated with water, traces perhaps still remaining in the current sediments.

The exploration of such sites may therefore reveal conditions conducive to past life and is therefore of great importance to astrobiological missions such as ExoMars – a joint venture of ESA and Roscosmos. While the ExoMars Tracer Gas Orbiter is already studying Mars from the top, the next mission will start next year. It includes a rover – recently named after Rosalind Franklin – and a surface science platform. It will target and explore Martian sites considered as key elements in the hunt for signs of life on Mars.

"Such discoveries are extremely important, helping us to identify the most promising areas of Mars to find signs of past life," says Dmitri Titov, a scientist with ESA's Mars Express project.

"It is particularly interesting to note that such a successful mission on the Red Planet, Mars Express, is now essential to help future missions such as ExoMars explore the planet in a different way." Is a good example of successful mission collaboration. "