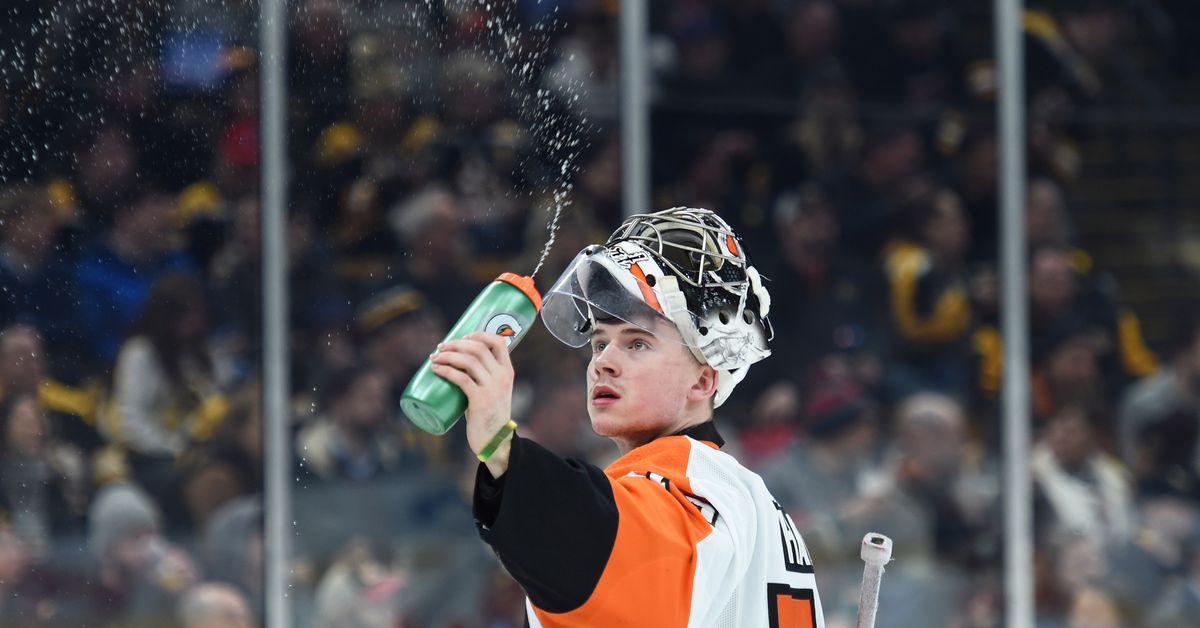 Two parts in two days against these same imbeciles? I do not like it. I had to watch Claude Giroux get almost killed yesterday, and now I have to log in again as if I had not seen a homicide attempt against my real biological father? Foolish. Who allowed this to happen? I need to talk to someone.

Who will buy that? Whose blood was sacrificed? How do we want to restore the cosmic balance of the universe?

The Flyers won this match.

Well, it was fast.

In the second quarter, Wayne Simmonds received a direct order from God and fought Anthony Mantha, an act of virtuous vengeance. I must say that it has pleased me. It was fun for me personally to be a witness. Have a good time this Sunday night, guys.

The Flyers came out of the door with a lot of chances, looking like the promising team we saw (in incredibly confusing increments) just yesterday. As a person who does not like Detroit for absolutely no good reason, I could only hope to have the opportunity to attend another snoop, this time in Little Caesar's Arena ( lol).

I would neglect my duties here if I failed to mention the transfer of Andrew MacDonald to none other than Mantha. My guy, do not allow that. If I have to see Mantha score one more goal after the murder that he committed on the ice, I will leave hockey, as a hobby, as a concept, everything.

I was going to say that little has really fallen during this period, but Sean Couturier then did things like Sean Couturier, and almost allowed himself to score a goal. Oskar Lindblom would get a credit for the goal (deflected by a Red Wings player) at 3:48 pm, but it was one of those patented games "That-would-not-come-if-" is played by Couturier who you really feel things your soul. Do you remember when people thought it was bad? Complete fools, I say.

But really, other than that, I do not have much to say here. Sorry to break the mold.

Jonathan Bernier has been replaced by Jimmy Howard, who is at least a hundred years old, I think. The Flyers should not have any problem marking a senior, so it seemed like a pretty positive situation.

The Flyers, however, can not help making me a fool, so it would be a pretty disappointing effort by almost everyone. I will eat my words now.

Detroit received the first power play of the game on a penalty at the attack called on Claude Giroux at 6:10. I mean "nobody is perfect" but I think it would be simply disrespectful.

The punishment-kill that follows does not seem very good. The Flyers have spent most of their time collapsing in their own area. This is the type of show that looks ugly, but that gives the desired results because the Red Wings would not score even if they spent the vast majority of the men 's advantage. in the Flyers area.

When I said "unsatisfactory effort", I really wanted to say it with all the fibers of my being. In the middle of the second half, the good guys from Orange had only one shot on goal. Somehow completely predictable, and yet infuriating. They never make things easy for anyone.

I'm sorry guys. I know I do not provide the thorough analysis that you all desire so desperately. The truth is? This game is madly boring.

Does anyone remember how the people of Ivan Provorov were dramatic earlier this season? I really remember something like that. Not me, though; I have never had an irrational thought in my life.

Anyway, I mention it because Provorov scored the decisive goal just two minutes into the third period on a game that did not seem particularly dangerous so far. I will take just about anything here.

Even with the goal at 2:11, it seemed really impossible for the Flyers to win this game. To further accentuate this feeling, Scott Laughton was called to hang on at 5:42; It's probably a weak call, but I'm more biased than anything because I think I've seen several missed penalties on the Red Wings throughout the match and I love the Philadelphian plot theory that the Referees are against us (because that's true).

The death sentence was, uh. Let's say "dull" here. It seemed that the only thing that allowed the Flyers to stay in the game was the game of – go, you already know it. Carter Hart was forced to make a backup after a dangerous backup, and he took up the challenge as he usually did. My god, I love this kid. I feel on the verge of tears watching his face. We have been waiting for so long, our kind son.

The remainder of the period was mainly composed by the Red Wings, throwing stuff on Hart and witnessing the new era of Philadelphia Goaltending. What a disappointment for you guys. We all live for the first time.

The Flyers had only three (3) shots on goal throughout the period during the final two minutes of the match, which is exactly the moment Howard went on the bench for the bonus striker. I said aloud, "Oh, it's going to work overtime." For no reason in particular, the Red Wings looked like a dangerous and competent team, and we were definitely going pay for our insolence. Especially me, though. Especially my insolence.

The extra time did not go into overtime, however, as the fourth shot on goal for the Flyers went straight to the empty goal. Lindblom took easy credit and oh my God, wow, how did it happen. How did we all let this happen?