From Chelyabinsk to Cuba: the meteoric connection 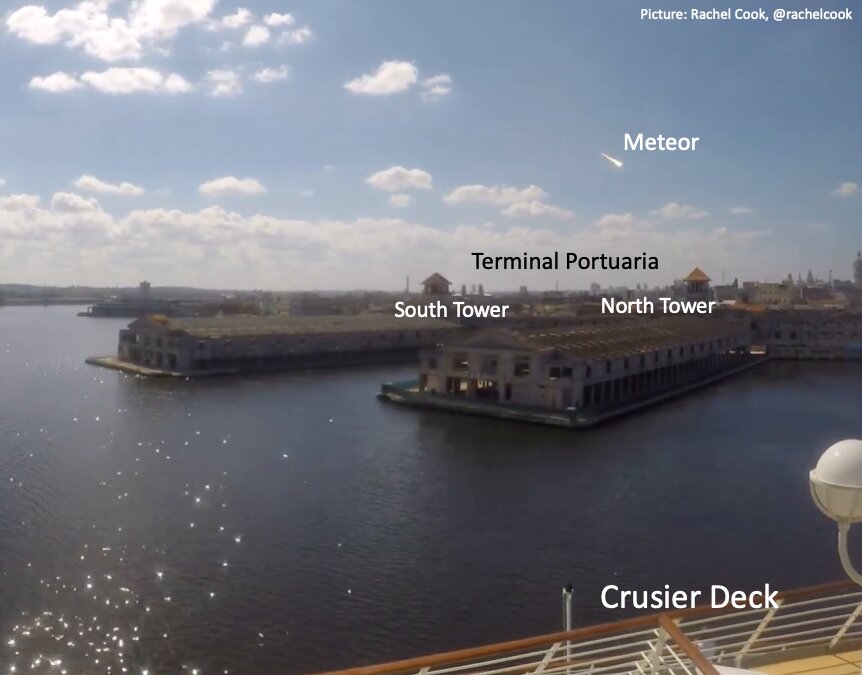 On February 1, 2019, a luminous meteor crossed the sky over Cuba in the middle of the day. The phenomenon, which was followed by a trail of smoke (a characteristic cloud left by burning in the atmosphere of a meteoroid) and a sonic boom, was seen by thousands of locals and of tourists in the area of ​​Pinar del Rio (west side of the island). island).

Almost at the same moment of impact, a cruise ship was leaving Havana harbor and on board, Rachel Cook, an American tourist and vlogger, put an end to the unstowing process. Ignoring, she accidentally recorded one of the few known videos to date of the falling meteor. Meanwhile, 400 km, Fort. Myers Beach, Florida, a webcam from the EarthCam network was filming lunchtime activities on the beach. Fortunately, the camera aimed the right direction to record the meteor from a distance.

Just minutes after the event, social networks, including Instagram and Twitter, received an avalanche of videos and photos taken from the island, most of them showing smoke trail left by the meteor. One of these videos was particularly interesting. It was recorded in one of the main streets of the city of Pinar del Rio and showed dozens of people in the street watching with wonder the rest of the cloud (see the video in this link). Although the video does not show the meteor, it was full of details about where and when it was recorded.

All these events recalled the incredible experience of the Chelyabinsk meteor in 2013, when a very brilliant bulldozer invaded the atmosphere of a populated region of western Russia, becoming the only event of this type observed by humans for almost a century.

Just days after the impact of Chelyabinsk, a team of astronomers from the Institute of Physics of the University of Antioquia, led by Professor Jorge I. Zuluaga, reconstructed the trajectory of the Chelyabinsk meteor using exclusively videos of the phenomenon posted on YouTube.

Although many other teams in Russia, the Czech Reublic, Canada and the United States, have also reconstructed the trajectory using more sophisticated methods and data.

Today, barely a week after the event and almost six years after the impact of Chelyabinsk, the same Colombian science team, again using the information available on the Internet, has applied its methods to rebuild the trajectory of the Cuban meteor. Their findings were included in a scientific manuscript that has just been submitted to a peer-reviewed journal. A pre-print of the manuscript is available in the arXiv lists of Cornell University.

"We were very fortunate that at least three relatively reliable videos, including one of incredible quality, could be available on the Internet in such a short time," Zuluaga says. "Rebuilding the trajectory of a meteor requires at least three ground observers.Although several satellite images have been recorded and also available online without observations from the ground, accurate reconstruction is not feasible."

According to the reconstruction carried out by Colombian astronomers, the object producing the meteor over Cuba begins its trajectory in the atmosphere at an altitude of about 76.5 km above the Caribbean Sea, at a point 26 km southwest of San Felipe Keys (Cuba). ).

The speed of the rock in contact with the atmosphere was 18 km / s (64,800 km / h). With such a speed, the thin air of the upper atmosphere was not enough to stop the object, although it was enough to heat it until the rock became shiny.

The rock continued its way almost straight line up to a height of about 27.5 km. It is about this altitude that the smoke trail, observed by thousands in Cuba and satellite images, began to develop. Zuluaga and its co-authors believe that the cloud observed at Pinar del Rio corresponds to a small part of the meteor's trajectory (corresponding to altitudes between 26 and 22.5 km). According to the images on this city and the reconstruction of Colombians, the air explosion ended about 22 km away.

From there, hundreds of small fragments that survived the ablation of the air fell in many directions without emitting light (dark flight). Although most of these small rocks are probably found in the forests of the Viñales Natural Park, some of them have touched several houses in the Viñales Valley, near a tourist monument, "El Prehistoria Wall, six kilometers from the main road. of the object. If a large fragment survived the ablation, it probably landed in the ocean on the northwestern coast of the island.

After reconstructing the trajectory in the atmosphere, Colombian astronomers reported the impact and discovered that the culprit, a rock of a size estimated at several meters and weighing about 360 tons, came from an eccentric orbit around the sun an average distance. of 1.3 astronomical units (1 astronomical unit = 150 million km). Before touching the Earth, the rock made a complete turn of the sun every 1.32 years. All this ended on February 1, 2019, when the rock and the Earth found themselves at the same time in space.

But reconstructing the trajectory of the meteor was not enough for Colombian astronomers. Several groups around the world are probably currently working on their own estimates, some of them using specific satellite data or information from infrasound networks. As we learned about the impact of Chelyabinsk, this event is attracting the attention of many scientists and it is likely that more work will be published on the impact of the coming weeks or months.

More interestingly, astronomers used their results to test a method recently developed by Zuluaga and Mario Sucerquia, co-author of this work, to study the impacts of asteroids against the Earth and the Moon. The method, called Gravitational Ray Tracing (GRT), applies several algorithms originally designed for the computer graphics industry.

In GRT, the Earth is not hit by asteroids but is a source of it. Many rocks are launched (in a simulated environment) in thousands of directions in the sky and at different speeds, from a certain geographical position (a beach in the northwest of Cuba or a valley on the moon) . Rocks that are in orbit around the sun, similar to the asteroids already discovered, are reported as potential impactors. Rocks with orbits that are not typical of near-Earth objects (NEO) are reported as non-natural objects.

By using the rocks reported as potential asteroids, astronomers were able to create maps in the sky of directions from which a real asteroid could arrive. Or at least that's what the Zuluaga and Sucerquia theory states.

Colombian astronomers have discovered that their theoretical method predicts what the Cubans saw: a rock coming from the south on a trajectory inclined 30 degrees from the horizon.

In order to check if this result was not just the product of chance, they performed a similar calculation on the Chelyabinsk event. Again, the method predicted that at the time and location of the Russian impact, the most likely area of ​​the sky from which an asteroid could arrive was towards the northeast, at an altitude of 20 degrees. The actual object appeared almost in the direction of the east and at exactly 20 degrees of elevation.

Nevertheless, the coincidence between the TRB forecasts and the actual conditions of Chelyabinsk and Cuba's impact could also be uncertain. However, this could also reveal a deeper truth, namely that researchers could predict the direction in the sky from which a meteor could arrive in the city (if that impact actually occurs).

"It is only after the recent digital boom that we have become aware of the potential frequency and dangerousness of the impact of small meteoroids on populated areas," said Mario Sucerquia. "Unfortunately, we are not yet able to defend our society against this threat, and our work suggests that, in principle, we could be prepared, at least with some knowledge, for future impacts."

Professor Pablo Cuartas, co-author of the paper, said: "The relatively small size of the meteoroids, like those that fell in Chelyabinsk and Cuba, made them virtually undetectable before the impact. , the risk that such damaging events will occur in heavily populated areas is high, our results suggest that we can predict in advance at least which direction they will come from. "

Finally, he said: "We should be ready for the next shot."

Mario Sucerquia is even more direct: "We should check the probabilities of impact all the time, at least in populated areas; this, for example, as part of a public protocol, can help us take preventative measures against the threats of impact. "

Explore further:
Astronomers calculate the orbit and origins of the Russian fireball

More information:
Data and software developed for the work: github.com/seap-udea/MeteorTrajectories.

Can we predict the impact conditions of meteoroids the size of a meter? arxiv.org/abs/1902.03980

Jorge I Zuluaga et al. Towards a theoretical determination of the geographical probability distribution of meteoroid impacts on Earth, Monthly Notices from the Royal Astronomical Society (2018). DOI: 10.1093 / mnras / sty702