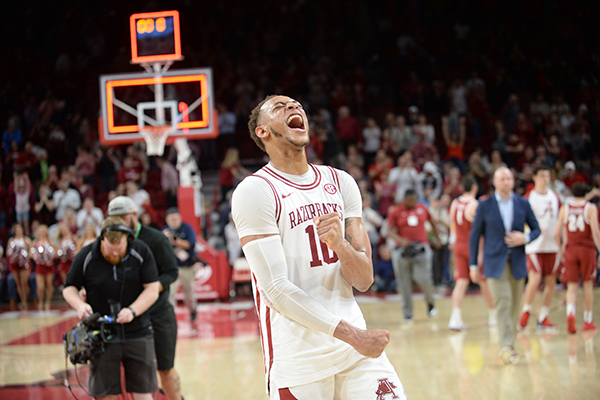 FAYETTEVILLE – Alabama coach Avery Johnson has yet to beat the University of Arkansas basketball team.

The Razorbacks beat Johnson and the Crimson Tide 82-70 on Saturday at the Walton Arena in front of an announced crowd of 9,815.

Johnson, the former NBA leader and head coach who is in his fourth season in Alabama, has fallen to 0-4 against Arkansas.

The Razorbacks (17-14, 8-10) are the only SEC team that has not beaten Johnson since coming to Alabama.

"We knew we were going into the season," Johnson said. "It was both Kentucky and Arkansas."

The Crimson Tide allowed Johnson to win his first Kentucky win by opening the game by beating the Wildcats 77-75 at home, but they still fail to resolve the Razorbacks.

"We started the game on a positive note," Johnson said. "We finish on a slightly negative note.

"Arkansas is tough, they have always had important men who have been problematic to us."

The big problem for Alabama on Saturday was Daniel Gafford, the second student of the 6-11 Razorbacks of El Dorado.

Gafford, who is likely playing his last home game because he is screened in the first round as the NBA coach, led Arkansas with 29 points, a career-high 16 rebounds, 2 blocked shots and 2 helpers. He hit 11 of 17 shots and 7 of 9 free throws.

"What a performance of Daniel," said Arkansas coach Mike Anderson. "I thought he was playing in another stratosphere, it seemed."

Fans cheered Gafford when Anderson pulled out of the match with a time remaining at 1 minute 24 seconds after the Razorback pushed their lead to 79-62.

Johnson played in the NBA as a leader for 16 seasons and was head coach of the Dallas Mavericks and Brooklyn Nets for seven seasons.

"This guy is a pro," said Johnson about Gafford. "I do not know if I'm supposed to say that while he's in college, but I guess I'd probably know one when I see him."

"He's long, he's athletic, he does an excellent job of selecting and driving, he has incredible hands, so it's a handful, which is why he's a SEC player, and he'll have a career in basketball. "

Gafford started the race with back-to-back dunks – the second with a Sills passing – and also hit two free throws, scored on a lay-up and made a spinning move down the hall.

"He was in the area and whenever someone is in this area, you have to continue feeding the balloon with him because you could say that he was hungry and that he was active" said Isaiah Joe, a freshman in Arkansas. "He was doing his defense work, and you can do nothing but reward him, and that's what we did." He did a great job defending and finishing around the basket. . "

Gafford was on the bench for 4:04 of play time before continuing his momentum.

"So he was rested when he went back there," Anderson said. "I thought it was a lot cooler."

Johnson said Gafford was too quick to defend the tide.

"We could not send our double-teams fast enough," Johnson said. "When he catches the depth, he is a handful.

"When you have a guy like Gafford and [an opponent] is on a run, so you are essentially going to your problem solution. And that's what he did for them tonight. He solved a lot of problems. "

The Razorbacks have a five-game winning streak against Alabama (17-14, 8-10) and have won six of the last seven team games.

"Their team played an outstanding game," said Johnson. "They played with a lot of energy, they looked like they were all 50-50, so congratulations to them."

"This being our last [home] Anderson, said Anderson. I thought it was one of the best games we played here at home. "

Arkansas had eight turnovers compared to 15 for Alabama, which the Razorback converted into a 19-6 advantage in turnovers.

"We have disrupted Alabama – and Alabama is a very good basketball team."

Anderson, a native of Birmingham, Alta., Toppled the Alabama series after starting 0-3 against Tide when he became the Razorbacks coach.

"We were lucky," said Anderson. "I do not think it's just Alabama, we're trying to beat everyone, I guess the ball just bounced back when we played it."

Sketch of the game

UP NEXT Arkansas will play Florida midday on Thursday in Nashville, Tennessee, during the SEC tournament.