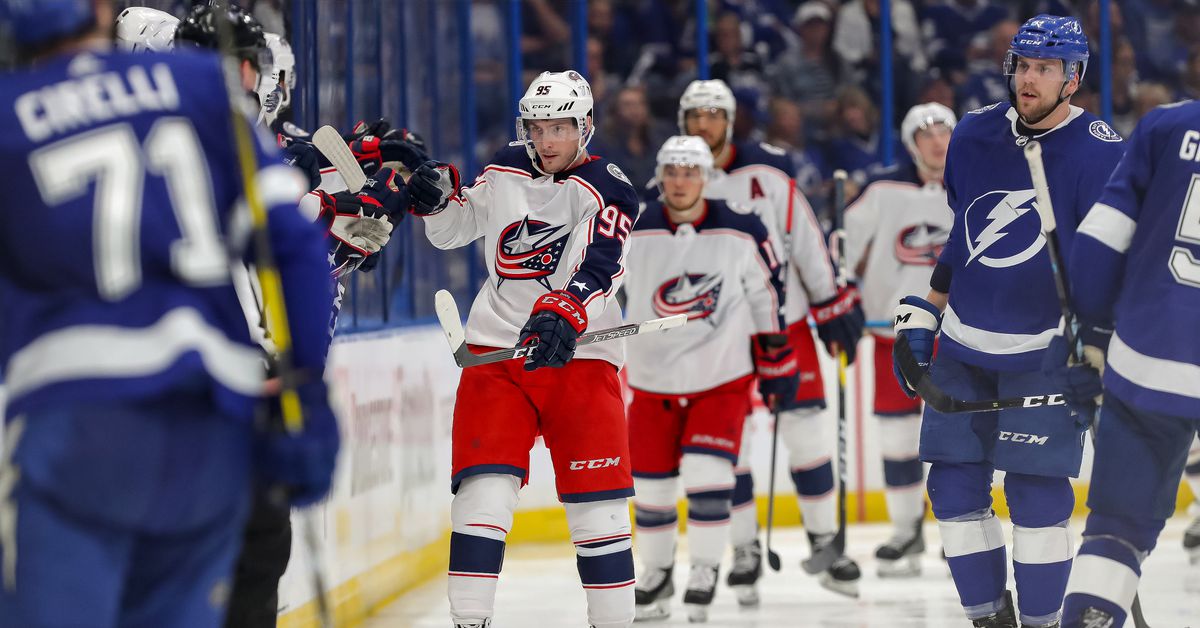 The Columbus Blue Jackets dominated the Tampa Bay Lightning head group in a 5-1 victory in Friday night's second game, taking a 2-0 lead in the series as the CBJ headed for the third match of Sunday.

Mikhail Sergachev scored the only goal for Tampa Bay.

The Blue Jackets lost little time, scoring 5:15 of the match. Matt Duchene won the puck battle against J.T. Miller and shot a net that Cam Atkinson redirected for the first goal of the Blue Jackets:

The CBJ's first powerplay game went scoreless – with plenty of ball possession and chances – before Columbus returned to the power play with Riley Nash drawing a partial breakaway. The conversion took four seconds, and Duchene won the match against Zach Werenski for a shot on goal and a 2-0 lead.

From there, the Blue Jackets kept the Lightning scoreless while the teams were eliminated for the rest of the period. Werenski is inclined with Brayden Point for his first professional fight as a result of a post-whistle scrum:

The end of the period was marked by another melee. Victor Hedman and Riley Nash spoke as the Lightning team, stunned, headed for intermission while Columbus had a 2-0 lead.

Tampa's frustration erupted early and Alex Killorn was penalized with a penalty for interference 30 seconds after the start of the frame. It took a minute for the CBJ's power play to work, but he finally managed a tic-tac-toe game at Duchene on the doorstep for a 3-0 lead.

This is Duchene's first goal in the playoffs.

The second saw the Lightning generate some chances and Columbus always responded in the same way.

At 15:39 of the end of the period, CBJ inflicted too many penalties on the men in the Lightning 's first power play. Columbus continued to frustrate Tampa in the neutral zone and after the right-hand side rang the goal, the penalty kicked out.

Columbus continued to block the shots and keep the Lightning at bay. Some good chances – Anderson slid a shot from Vasilevskiy's arm and Jenner hit the post – could give him a 4-0 lead in Columbus. Instead, the Blue Jackets had to settle for a 3-0 lead and embarrassed the Lightning after two periods.

Mikhail Sergachev scored the Lightning on the board five minutes later and Nick Foligno was pissed off to tingle Tyler Johnson less than a minute later. The shots on goal from the CBJ were up, doing its job for the second and last time of the night.

With the CBJ a little shaky, Riley Nash scored points to break the score at 4-1. The bird Boone Jenner was looking for the puck and found Nash in front to punch the Lightning.

At 12:15, Panarin managed to put 5-1 in the place of a tic-tac-toe game from Duchene and Oliver Bjorkstrand to lay the nail in Tampa's coffin.

Things went wrong with four and a half minutes to play. Nikita Kucherov tripped Markus Nutivaara and climbed aboard the young Finn, triggering the release of hell when Victor Hedman, Josh Anderson and Nick Foligno became rowdy.

Kucherov may not play in the third match.

This mess imposed on the Blue Jackets a five-minute major penalty for the rest of the match, salting it for a win.

The Blue Jackets have done almost everything correctly. They played one of their best games of the season and have a 2-0 lead in the series. This time, things are different.