Giant X-ray "chimneys" are mouths for the great energies produced in the center of the Milky Way. 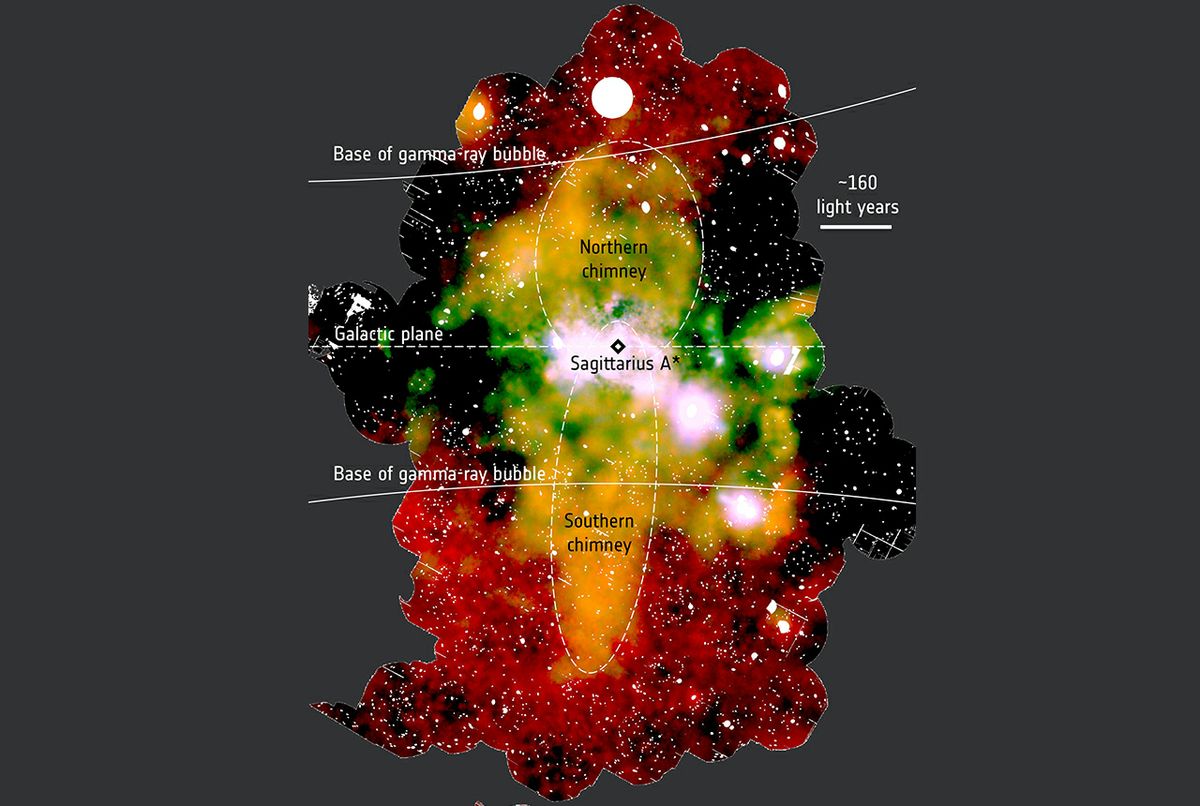 The center of our galaxy is a frenzy of activity. A gigantic black hole – 4 million times more massive than the sun – releases energy by rejecting interstellar detritus while nearby stars burst and burst afterwards.

Now, an international team of astronomers has discovered two escape channels, called "galactic center chimneys" – that seem to channel matter and energy to the cosmic fireworks located in the center of the Milky Way, about 28 000 light-years from Earth.

Mark Morris, professor of astronomy and astrophysics at UCLA, contributed to the research, which will be published March 21 in the journal Nature.

"We hypothesize that these fireplaces are mouths to evacuate all the energy released at the center of the galaxy," Morris said.

All galaxies are giant star-forming factories, but their productivity can vary widely – from one galaxy to another and even during the life of each galaxy. One of the mechanisms for stifling the rate of star production is the fountain of matter and energy fanned by the very heavy black hole that is hidden in the center of a galaxy.

"Star formation determines the character of a galaxy," Morris said. And this is something that is important to us because the stars produce the heavy elements from which planets and life are made.

To better understand the fate of this energy output, Morris and his colleagues led the European Space Agency's XMM-Newton satellite, which detects cosmic X-rays, toward the center of the Milky Way. Since X-rays are emitted by extremely hot gases, they are particularly useful for mapping energy environments in space.

In the images they collected from 2016 to 2018 and in 2012, the researchers found two X-ray plumes – the galactic center chimneys – that extend in opposite directions from the central center of the Galaxy. Each plume originates approximately 160 light years from the supermassive black hole and extends over 500 light-years.

The chimneys are connected to two gigantic structures known as Fermi bubbles, cavities dug in the gas that surrounds the galaxy. The bubbles, which are filled with high-speed particles, straddle the center of the galaxy and stretch for 25,000 light-years in both directions. Some astronomers suspect the Fermi Bubbles to be massive eruptions relics of the supermassive black hole, while others believe that the bubbles are destroyed by hordes of nascent stars. In both cases, chimneys could be the ducts through which high-speed particles arrive.

Understanding how energy moves from the center of a galaxy to its outer limits could help to understand why some galaxies overflow with star formation while others are dormant.

"In extreme cases, this source of energy can either trigger or stop the formation of stars in the galaxy," Morris said.

Our galaxy is not so extreme: other galaxies have fountains fed by central black holes that weigh a thousand times more than ours, but the center of the Milky Way offers a detailed glimpse of what might happen in more energetic galaxies.

"We know that the flows and winds of matter and energy emanating from a galaxy are essential for sculpting and changing the shape of this galaxy over time, and play a key role in how galaxies and other structures are forming and evolving in the cosmos, "said the official. author Gabriele Ponti of the Max Planck Institute for Extraterrestrial Physics in Garching, Germany. "Fortunately, our galaxy provides us with a nearby laboratory to explore this in detail and explore how materials flow into the space around us."

Morris said the centers of the nearest galaxies are hundreds, even thousands of times farther away than ours. "The amount of energy coming out of the center of our galaxy is limited, but it's a very good example of a galactic center that we can observe and try to understand," he said.

Wombats, other Australian animals glow in the dark under UV light, scientists find