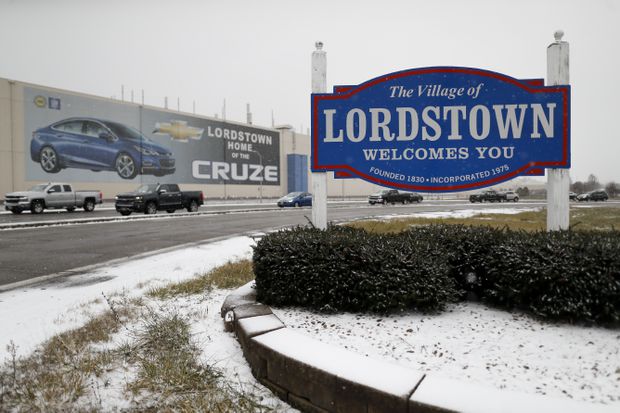 Republican President Donald Trump and Ohio Democratic Senator Sherrod Brown have stopped pointing the finger at the imminent closure of the General Motors assembly plant in Lordstown long enough Wednesday night to discuss the future. 39, a bill on auto jobs that Brown introduced this summer.

Brown requested a phone conversation with Trump after GM announced a series of closures that would result in the loss of more than 14,000 jobs in US and Canadian facilities, including about 1,600 in Lordstown.

In a statement issued after the phone call, Brown said that he had asked Trump to support the legislation that he had submitted after GM announced that it would build Chevrolet Blazers at Mexico rather than in the United States. According to Brown, Trump said he appreciated the bill, which would give customers a $ 3,500 rebate when they buy American-made cars, and fully tax the foreign profits of automakers who are cutting jobs at home. United States while increasing their foreign labor force.

"I'm glad the president said the right thing tonight, but he needs to move on now," said Brown's statement. "I am asking him to help preserve these jobs for months, and we have long since stopped subsidizing companies that are sending jobs overseas and are starting to help American workers."

On July 25, 2017, President Trump traveled to Youngstown, Ohio, and announced that he would bring back jobs in our area. Today, GM is closing the plant in Lordstown and 4 more in North America, representing a loss of more than 14,000 jobs. The President has not yet tweeted about GM today. pic.twitter.com/gKNv8ieq9N

Democrats, including Brown, have criticized Trump for failing to secure the promised economic revival in the industrial Midwest. Last year, he assured the workers of Mahoning Valley that "we will fill these factories or demolish them and build new ones".

Trump responded by telling the Wall Street Journal that Ohio "was not properly represented by its Democratic Senator, Senator Brown, because he did not get the message out" to General Motors. Brown said Trump was giving tax breaks to businesses to shut down US factories and lay off workers. He said he would compare his background in defense of Ohio workers and American workers to those of Trump.

"I join with a long line of people that the President, who never takes his responsibilities, points the finger," said Brown, who said that the clothing and tableware companies that Trump operated were manufacturing their products abroad.

The reason the US small truck sector is a favorite is because, for many years, a 25% tariff has been applied to small trucks entering our country. This is what is called the "chicken tax". If we did it with the cars coming in, a lot more cars would be built here …..

….. and G.M. would not close their plants in Ohio, Michigan and Maryland. Get smart Congress. In addition, the countries that send us cars have been taking advantage of the United States for decades. The president has great power on this issue – because of Mr G. event, he is studying now!

Earlier on Wednesday, Trump had suggested on Twitter to impose tariffs on foreign cars entering the United States. On Tuesday, he suggested the government cut subsidies to GM and end tax breaks for electric vehicles.

"The countries that send us cars have benefited the United States for decades," Trump said. "The president has great power on this issue – because of the event president G.M., he is at the study now! "

And on Thursday morning, he said closures were an aberration in a booming economy.

"General Motors is very opposed to what other automakers and others are doing," Trump said on Twitter. "Big Steel opens and renovates factories all over the country. Automakers are flocking to the United States, including BMW, which has just announced a major new plant. The United States is booming! "