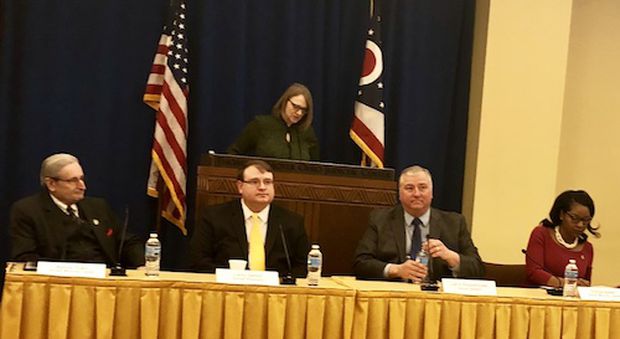 Can not spell party without APTuesday was the Associated Press annual legislative event, during which the Ohio government and politicians met with reporters and answered questions from reporters. Here are the highlights:

Executions stoppedGovernor Mike DeWine said on Tuesday that there would be no more executions in Ohio until a new method of implementation could be finalized and found constitutional by the courts, Andrew Tobias writes. cleveland.com. He refused to say how long it would take, and refused to give his personal point of view on the death penalty. In January, DeWine ordered a review of Ohio's method of execution after a federal magistrate wrote that Ohio's cocktail of lethal injections would "very likely" cause a convicted prisoner to "suffer" intense pain and unnecessary suffering.

Repair a holeDeWine said its administration will propose Thursday a gas tax increase to fill a $ 1.5 billion funding gap, writes Jeremy Pelzer of cleveland.com. "The day of judgment has finally arrived," said the governor. "And we have the obligation to deal with that."

Up and Atom: DeWine also indicated that it wanted to find a way to keep two FirstEnergy nuclear power plants located along Lake Erie open, but did not directly authorize the utility to increase customer rates to help power plants in difficulty. "I think it would be important for us to try to come up with a proposal allowing us to keep these factories open," said the governor. "If we do not do it, for anyone in the state who is worried about carbon, we'll just give up and say we do not care anymore."

Maybe it just takes some time: Only two people or companies have chosen to pay their taxes with Bitcoin since Ohio set up a platform accepting cryptocurrency in December, writes Tobias. The State Treasurer's Office, Robert Sprague, has refused to give details on paying bitcoin fees, though Cleveland businessman Bernie Moreno, a Republican donor and enthusiastic defender of crypto technology , has announced that it has paid its business taxes with the state's OhioCrypto.com platform.

Have you heard this story? US representative Tim Ryan, a Democrat from the Youngstown area, is currently seriously thinking about a campaign for the presidency. But as Seth Richardson writes of cleveland.com, it's Ryan's relaxed state of mind. Richardson has listed every time Ryan "seriously considered" to run for office and then retire.

Moving the tax burden? Some critics of the former Gov. John Kasich's tax reduction policy and the Republican legislature indicate that GOP leaders have shifted the tax burden to local governments. Some results are in the state. More than a quarter of the state's cities and towns raised local income taxes in the kasich years, revealed Rich Exner, head of data at cleveland.com. This usually came with the approval of voters. In many cases, local officials cited state reductions in the local government fund and in the estate tax.

Resigned: Highland Heights mayor Scott Coleman resigned Tuesday after cleveland.com's report accused him of embezzling more than $ 80,000 from the Township GOP representative's re-election campaign from Bainbridge, Dave Joyce. City Council Chair Chuck Brunello will assume the role of mayor until an election can be held in November, reports Sabrina Eaton of cleveland.com. Board members say they do not believe Coleman did something wrong with the city's funds, but will hire an external auditor to review his expenses.

Needs improvement: A new study from Stanford University shows that Ohio's charter schools have not really improved over the decade. Patrick O'Donnell of the Plain Dealer says there are new tougher laws and some of the worst schools have been closed, but these changes are too recent to be considered in the study.

Super Dario: Dario Hunter, a member of the Youngstown Board of Education, a black gay rabbi who is the only Green Party elected in Ohio, has announced his candidacy for the presidency. As reported by Pelzer, Hunter's platform includes the creation of a single-payer health care system, the reduction of the military budget and the cessation of aid to Israel.

Another day in paradise: Democratic Congress Campaign Committee Has Purpose Twitter ad on the fact that US representative Steve Chabot has been placed on his watch list for retirement 2020, with the image of a lounge chair on a sandy beach and the words "Search for an easier seat, Representative Chabot" .

Bernie bros to come: Bernie Sanders may need to chart an unconventional path to the White House to beat President Donald Trump in 2020, including spending time in states like Ohio, according to Politico's Holly Otterbein.

2. He owns shares in the Wendy's Co., based in Dublin.

3. The Ohio House paid him $ 6,074.22 in miles. He received $ 1,316.69 for travel associated with GOPAC, a Republican organization. He received $ 133.40 for a trip with the Ohio Republic House House Organizing Committee and $ 69 for accommodation at the Ohio Chamber of Commerce Policy Conference in Salt Fork.

4. He stated that he received gifts from Virginia Ragan, GOP donor, GOPAC and the Ohio House Organizing Committee.

5. The Toledo Chamber of Commerce paid for its participation in a legislative breakfast of $ 18.81 last year.

Kristi Burre has been appointed by Governor Mike DeWine as Director of the Office of Child Welfare Transformation, "to lead the child protection and foster care reform efforts in Ohio According to a statement. Burre was most recently assistant director of protection services for Fairfield County's Job & Family Services department.

Sam Herd was appointed chief of staff of Ohio House Democrats, making her the first woman in recent history to hold the highest position in a parliamentary group of the House of Commons. Ohio, according to a statement. Herd recently served as Betty Sutton's chief of staff for last year's lieutenant governor.

The political consultant and former president of the Republican Party of Ohio, Matt Borges, has been appointed to the advisory board of the Department of Political Science at Ohio State University.

Directly from the source

"Nobody does things all the time, but this criticism is not about doing things right. This is because the free press succeeds. And saying it as such is unflattering and exposes things that some people would like to bury. "

– Republican Maureen O'Connor, chief justice of the Ohio House of Representatives, spoke on Tuesday of media criticism, which has grown in recent years thanks to President Donald Trump. O'Connor was speaking at a forum sponsored by the Associated Press.

Capitol Letter is a daily briefing providing succinct and timely information to those who care deeply about the decisions made by the state government. If you are not a subscriber yet, you can register. right here to receive free Capitol Letter in your mailbox every day of the week.