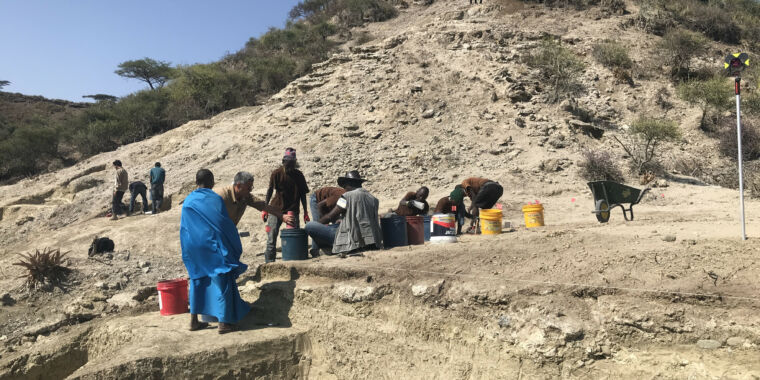 The versatility that helped humans conquer the world has come to light very early in our evolutionary history, according to sediment and stone tools from the Olduvai Gorge in Tanzania.

Olduvai provided some of the oldest known tools and fossils of our kind, Homo. A recent study reconciles this evidence with environmental clues buried in the sediment. The results suggest that our first parents were equipped to adapt to new environments around 2 million years ago.

This seems to have been a key ability that has allowed our loved ones to go global. 1.7 million years ago, a primitive human relative called Man standing had spread beyond Africa and most of Asia to Indonesia. They had reached Western Europe 1.2 million years ago. During their travels, hominids encountered environments very different from those in which their ancestors had evolved, such as the rainforests of Indonesia and the arid steppes of Central Asia.

They may have been able to prepare for this just by staying in one place in Africa. At Ewass Oldupa, a recently excavated site on the edge of the famous Olduvai Gorge, finds indicate that the first hominids lived in an ever-changing landscape.

Life after the volcano

The earliest evidence we have of the first human parents at Olduvai Gorge is a handful of stone tools, made and used around 2.03 million years ago.

Like the other tools discovered at Ewass Oldupa, they are part of the Olduwan complex: relatively simple stone tools made by early hominins like H. erectus and H. habilis. Olduwan tools are mostly sharp flakes and very basic tools for chopping, scraping and hammering. They are much less complex and precise than the tools made by later hominids, such as Neanderthals, who chipped small flakes on carefully prepared stone cores. But for a few hundred thousand years, Olduwan’s rudimentary tools did the job.

In Ewass Oldupa, the job was to survive in a landscape of mostly fern meadows dotted with some grasses and woody plants, watered by a meandering river. Ferns were probably the first plants to take root atop the wide fan of pumice that had spat out from a nearby volcano not long before. Traces of this landscape are still buried in a layer of sediment about a meter above the rocky remains of the old pyroclastic flow; Paleoanthropologist Michael Petraglia, from the Max Planck Institute for the Science of Human History, and his colleagues found fossilized pollen and microscopic pieces of fossilized plant tissue called phytoliths in the layer, alongside 10 stone tools.

For hunter-gatherers like H. habilis, whose fossilized remains were unearthed a few hundred yards from Ewass Oldupa, the Fern Pond would have been a pretty good place to make a living.

The river provided easy access to water, and the geology of the area provided several sources of stone for tools. Geochemical analysis of Ewass Oldupa’s tools suggests that the hominins here gathered some of their quartzite locally and ventured up to 12 kilometers (7.5 miles) for the rest. They seemed to choose different materials – in some cases as specific as choosing slightly different types of quartzite from different outcrops – for particular tools. (A study last year also suggested that the early tool makers in our family tree knew enough to choose their materials wisely.)

But then, as always, everything changed.

New worlds in one place

Thousands of years later, hominids that once foraged by riverside would not have recognized the landscape around Ewass Oldupa. Fern meadows had given way to a patchwork of woods and meadows around the shores of a lake. Microscopic fossils trapped in the sediments suggest that the plant species that made up these woods and grasslands have often changed, and the charcoal deposits reveal that forest fires periodically swept the area, helping the patchwork landscape to reorganize itself.

At other times in the region’s long prehistory, the lake has grown larger and the muddy sediments of the lakeside hint at a lush landscape of forests and palm groves. The edge of the lake later gave way to a dry steppe, mostly bare of trees and grass. Each of these environments offered wildly different food, water, supplies, and challenges, but hominids seem to have kept returning to Ewass Oldupa.

“Over time these habitats have sometimes changed slowly or quickly,” Petraglia told Ars. “It is difficult to know how quickly hominids entered new ecosystems due to the record breaking, but it is clear that they were able to cope with a wide variety of environments.

Petraglia and his colleagues found stone tools left behind by hominins who lived at the site (probably H. habilis) intermittently throughout its 200,000 years of constant change. The 565 stone tools, scattered over millennia of layered sediment on the site, do not resemble the detritus of a permanent settlement. Instead, it appears the hominids left the basin several times, possibly due to a sudden environmental change or volcanic eruptions, but kept coming back.

“There have been a number of volcanic events in the 235,000-year time interval represented at Ewass Oldupa,” Petraglia told Ars. “It’s interesting that the hominins returned to these areas after each of the eruptions, that is, they never completely abandoned the area.

And even if Ewass Oldupa’s early hunters and gatherers had found later versions of the place to be completely alien, they would still have recognized the tools used to survive there. For about 200,000 years, hominids have relied on the same basic tools to tackle the riverside fern meadows, the patchwork of woods and meadows, the lush lake shores and the dry steppe.

The Olduwan’s chopping, scraping, and hammering tools were relatively straightforward, but they were also incredibly versatile. According to Petraglia and colleagues, Olduwan technology offered a basic general toolkit that worked just as well in a palm grove by a lake as it did in a dry steppe. Humans have conquered the world because we are generalists, and generalists can adapt to almost anything. Our first parents clearly had the same advantage.