Howard Terminal's new Stage A proposal looks great, but it will be difficult to build 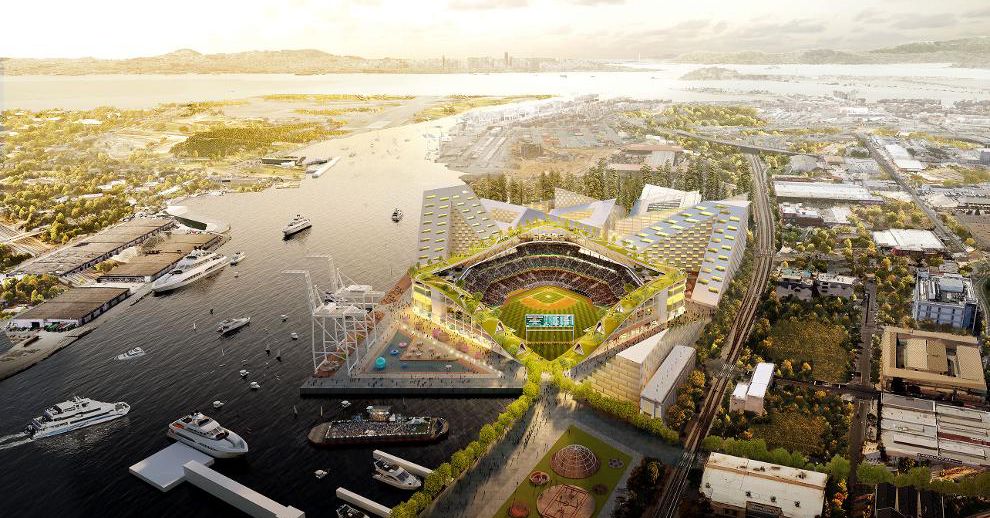 I will tell this story until someone screams me to repeat myself, but every word is true: when I was growing up, nothing more depressing than going to look at the Oakland A's at the Coliseum, it's because it was so much better than Candlestick Park. It was exponentially better. This place was all my family and I had always wanted a baseball stadium. The weather was better. Public transport brought you right there. When facing the center of the field, you saw open space instead of concrete. You can watch the game angry when you walk around the lobby.

The current Coliseum is … less perfect now. The Raiders ruined the features of the baseball game and the stadium collapsed embarrassingly. After years of proposals and returns, it seems that the A's are finally moving forward with plans for a new stadium that will look like a complex and ambitious mess. It's like a American ninja warrior course of bureaucratic and logistical difficulty, with chasms and mobile clocks and floating platforms.

It seems so perfect.

There were three shots in play for A Ball Stadium for a while now. The first was a park on the current site, where public transit and infrastructure are already in place, but which is in a systematically depressed area and likely to attract the kind of neighborhood development that the rough proposals like to boast. The second was a park that needed a lot of community college, which required the A to bend.

The current plan at Howard Terminal was the third and it was supposed to be untenable. Public transportation was one of the biggest obstacles, as was the weather, which was described to me as a sort of "candlelit park". The weather explains why the renderings are not water-oriented, although it does not save parking for all that the bay area can throw. We'll get there.

Here is the plan:

* This is a place where you can spend $ 80 to hear the sound of Iron Maiden, as if playing through 100,000 Teddy Ruxpins at maximum volume. Not that I am bitter.

The plan has so much, so much for. Gondolas can look like science fiction, except that this is just our American bias. It's not fair for ski resorts, and the new at Oakland Zoo works great (most of the time). A gondola can relieve some the distance between the stadium and the Bay Area Rapid Transit (BART).

The location is also an advantage. Not only is it on the waterfront, but it is close to Jack London Square, a great collection of shops and restaurants. And the weeds. But the new park would be a way to help solve this problem, you see, and I want it to my heart. I always liked Jack London Square *.

The design of the stadium and the efforts to integrate it into the city center are also a benefit. Nobody knows if the trend of migration in the cities will continue, but it will certainly not slow down. This is exactly the kind of stage young urban professionals dream of (young-urbs, I call them).

I am quite on this stage and the location.

There are, um, obstacles, of course.

The gondola looks lovely and, despite all that we could say about the fact that BART is not close, there is a train station less than two kilometers away. Opponents of AT & T Park made the opacity of a nearby station, saying it was too optimistic to expect other travelers to take the train, but it's a popular way to to go to the park. There is proximity, too.

A park might have a big traffic problem, though. The Interstate 880 is a hot disaster during working hours, which would affect at least half of the home games. There is no easy way to get in and out of thousands of cars. To get there, you must now get off the highway and go to the city, about nine blocks away. This sector can not endure a slow, sluggish net of vehicles without serious infrastructure improvements that can be paid for with public money. It means a public battle.

Do not forget this apocryphal quote from Mark Twain about the weather in the San Francisco Bay Area: "The coldest winter of my life was a summer at BOOOOO, YOU SUCK LASORDA, YOU SUCK, GO OUT OF HERE! "Unless it was my father telling me sure Quote Mark Twain in the middle of a Giants game in 1983. Anyway, although Oakland is not San Francisco, this part of the bay is still cold and windy.

A's property says the weather problem will be better than expected, though!

I will repeat the description I received from someone who is familiar with the study: it is not very different from Candlestick Park, from the wind point of view. Park A would certainly be warmer, if only because Norway is warmer than Candlestick, but there would still be a lot of wind.

It's hard to explain how badly the city and county have been bullied by the Raiders. Taxpayers still have $ 20 million of debt to pay each year until 2025 for the abominable renovations to the Coliseum that helped attract the Los Angeles Raiders, even though it was not there. will not even have the NFL team or the NBA next year. .

And this before arriving at the party where the stupid Raiders ruined A.'s outside field was a very good stage, I swear!

So there will be less patience for the kind of sleight of hand that other teams have managed to achieve in the past. There's something like "we're not going to get rent from you using our land, or the worry-free stuff with parking sharing with us, or." .. really, just browse this site and get on the job by reading about all sorts of tricky questions. They are always so creative! Even the AT & T "fully privately funded" park needed a small, nine-figure help. You also have to worry about the environmental impact report.

All this means that there will be no carpet for the A to solve their problems. There are still angry people in the Bay Area who will be on a mission to steal the carpet, burn it and pee on the ashes. The bulk of the funding will be private and this is a great benefit for the proposal. But it will always be difficult to run without any hitch.

As a crazy baseball who lives 15 minutes from the site, I'm ecstatic and I hope this plan will come true. As a frugal baseball lover who likes to have a reasonable baseball stadium for my family, I'm a little sad. And as someone who follows A's ball saga for a long time, I'm more than a little skeptical.

A dozen years ago, the A held a press conference to announce a new stadium in Fremont, south of Oakland. Bud Selig was there. Everything was pink. The stadium proposal was magnificent. The plans for the surroundings were ambitious. And all that was going to be tricky. It took three years before the A gave up.

This proposal looks better and would help turn A into a financial center, the kind of resource that one of the richest regions in the country can afford to support. And it would be great for baseball fans, so incredibly awesome.

But if you feel like fixing all this mess, hold your mind until this first shovel of earth is thrown aside.