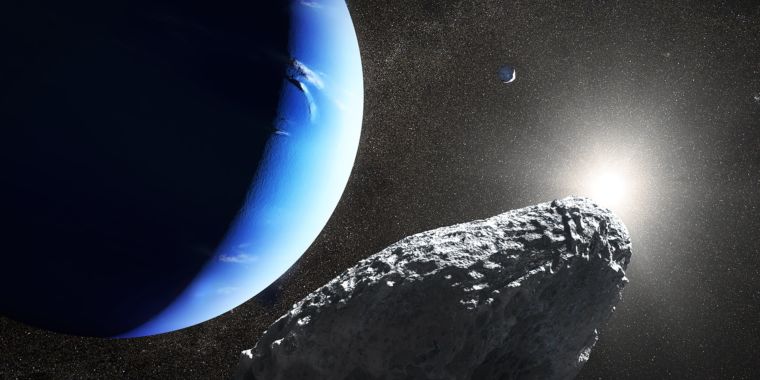 When the Voyager probes went through the outer solar system, they compiled a record number of discoveries. Among the objects and phenomena recently discovered was a vast collection of small moons gravitating around Jupiter, Saturn, Uranus and Neptune. Most of them were beyond the capabilities of the terrestrial material to be imaged at the time – we actually had to be there to see them.

Since then, however, improvements in terrestrial optics and the existence of the Hubble Space Telescope have allowed us to find a few small bodies missed by Voyagers, as well as other small objects elsewhere in the world. the solar system, such as the object of the Kuiper Belt recently visited by New Horizons. Today, researchers have found a way to use computational advances to further increase imaging possibilities: spot a whole new moon at Neptune and possibly detect another for the first time. times since the launch of Voyager 2.

Since Neptune was visited by Voyager 2 and the images are frequently depicted there, all the moons we have not seen yet will be quite difficult to see, probably because they are a combination of small and / or dark. The easiest way to visualize them is to increase the exposure time, which allows low-level signals to get out of the noise. This method will not work if there is a bright object nearby, which is not really a problem with the outer planets.

What is problematic are the previously discovered moons that revolve around enough moons to move perceptibly within the span of a single exposure. At some point, this motion creates a "smear" that keeps the signal firmly embedded in the noise.

A small team of researchers from SETI, NASA and Berkeley has found a way to compensate for this smear. If you know the orbit of a body, you can predict its moving from one image to the next. You can then adjust multiple consecutive images to place objects in the same orbit at the same location, allowing all the signals to come out. The transformation can become tricky because the orbit can be inclined at an odd angle with respect to the imaging device. But that's part of our current computing capabilities.

The problem is that if we do not know that the moon exists, we obviously do not know its orbit. But the team behind this new research has come up with functions that work for any moon moving in a circular circular orbit around the equator of a planet.

"You can use these functions to transform an image taken at the moment t0 to match the appearance of another image obtained at the moment t1 by moving each pixel from the original image to a new location, write the members of the team. After the transformation, any moon on a prograde, circular and equatorial orbit will appear at fixed pixel coordinates.

The researchers applied this method to Neptune, where Voyager 2 had discovered a set of small moons, using a set of images taken from Hubble's entire orbit.

When the analysis was completed, a small moon appeared. Now called Hippocamp, after the mythical sea monster, it is only 35 km in diameter and orbiting the outer edge of this cluster of moons. The same analysis detected the moon Naiad, which had been spotted by Voyager 2. But Naiad was not what we expected; in fact, it was off at 180 °. But an orbit that puts it in the right place is possible with a slight orbit adjustment predicted from the Voyager data. Unfortunately, this means that two or three claims of having spotted by ground based instruments in recent years are almost certainly wrong.

With three observations made at a dozen years apart, it is possible to calculate the Hippocamp orbit well enough to determine its position during the Voyager 2 flyby. Most Images missed this area of ​​space and the few pictures that have not all shown a significant smear. There was therefore no real way to identify this moon before the recent imaging campaigns.

The orbit of Hippocamp is just inside that of Proteus, the largest of the inner moons of Neptune. Tidal forces cause Proteus to slowly move away from Neptune, but Hippocamp is so small that these forces will have a minimal effect on him. And this implies that the two bodies were once much, much closer. Proteus has a large crater, Pharos, where an impact took off 50 times more than the Hippocamp volume, suggesting that there was enough debris around to form the tiny moon.

One of the problems with this idea is that the proximity of Proteus should have thrown Hippocamp into an eccentric orbit. But the researchers suggest that this is not as serious as it seems. Based on crater rates and the size of Proteus, they believe that collisions large enough to completely eliminate Hippocamp would have occurred at least nine times since its formation. The process of destruction and reformation should allow the Moon to gradually occupy more regular orbits.

This model, however, suggests that this and perhaps other small moons close to Neptune have suffered multiple destructions throughout their history rather than simply being set up during training of Neptune. And there is a lot of unrecorded material, suggesting that there might be some sparse circles in the area that will be difficult to detect without another visit to the blue planet.