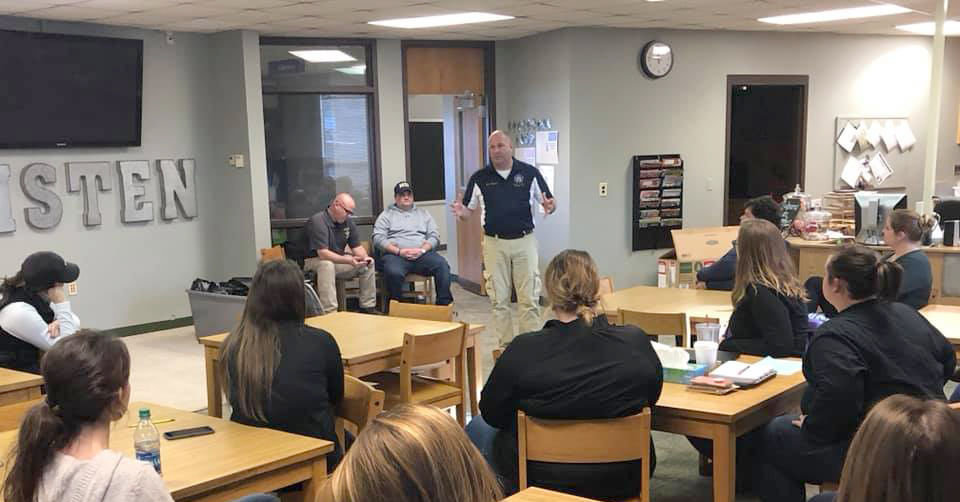 To what extent should active shooter training be realistic?

This is not as realistic as an exercise at an Indiana elementary school in January, according to teachers, whose union says they were shot with plastic film that caused marks, cuts and bruises.

The teachers' experience at Meadowlawn Elementary School in Monticello, Indonesia, was detailed by a representative of their union during their testimony before state legislators this week. The union advocated a provision prohibiting trainers from shooting shooting school personnel or students with any type of projectile during safety drills.

During the active shooting exercise, "four teachers at a time were taken to a room, they were ordered to squat and were executed in the same manner as projectiles, which was caused wounds such as welts and blood was removed. union, the Indiana State Teachers Association, wrote on Twitter during the hearing.

"The teachers were terrified but they were told not to tell anyone," the union said. "The teachers who were waiting outside and hearing the shouting were brought into the room four at a time and the filming process was repeated."

Teachers have not been publicly identified, and no one has spoken officially about his experience.

Dan Holub, executive director of the Indiana State Teachers Association, the largest teachers' union in the state, said teachers recognize the need for safety training, but the risks of venturing out hitherto in realism exceeded the advantages.

"We have to use common sense – not use these extreme training methods," he said.

The provision demanded by the union is an amendment to a school safety bill that would require schools to hold annual active fire drills. The bill would also provide schools with funding for school resource officers and mental health services. It was passed in the House and is now in the Senate.

The author of the bill, representative Wendy McNamara, who is also a high school principal, said the bill was based on the recommendations of a task force authorized by the governor to review security practices in the province. schools after the shooting in Parkland.

She said that she had learned the exercise only when her bill had been passed, but that she would work with colleagues to try to add an appropriate language so to protect teachers during safety drills.

"You can only assume that people want to be reasonable and put those protections on," she said. "And if not, then I'll find a way to make sure that happens."

Mr. Holub, whose organization represents 40,000 kindergarten to grade 12 educators in the state, said it was the first time that he had heard of such injuries when of a security exercise. He added that he thought that the police officers in charge of the exercise had gone beyond the schedule provided by the training.

The White County Sheriff's Office, which led the exercise, did not respond to a request for comment. Sheriff Bill Brooks told The Indianapolis Star that his officers would no longer use the pellets during teacher training.

The Twin Lakes School Corporation, which oversees Meadowlawn and four other schools located in or near Monticello, about 90 minutes north of Indianapolis, issued a statement Thursday on the training.

The ALICE trainings were developed by a private company after the shooting of Columbine in 1999 and are now used in schools across the country.

ALICE training have sometimes been criticized for their approach, which encourages countering – if there is no way to escape – in order to distract and disrupt an armed man. The company did not respond to a request for comment.

While school safety has become a fast-growing sector, experts also point to the limited research available on the most appropriate tactics. Debates have erupted on the armament of teachers, the usefulness of metal detectors and best practices in unthinkable scenarios.

"I'm not sure that a fictional example of that ever prepares anyone to what happens during a real active shooting situation," said Mr Holub.