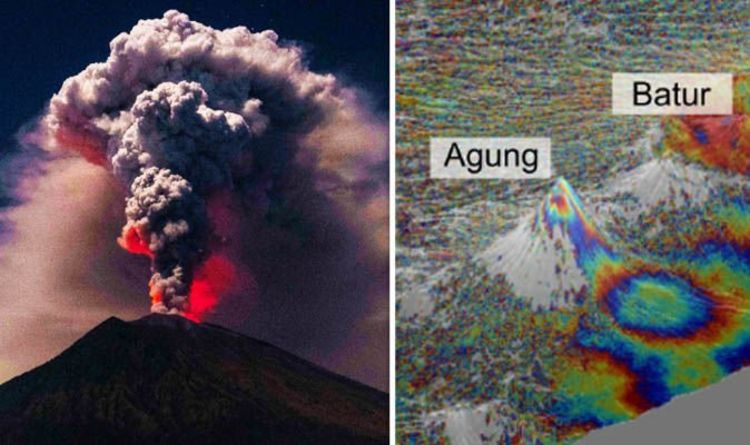 Mount Agung killed nearly 2,000 people during its eruption in 1963, causing a wave of concern when it broke out again in 2017. The Bali volcano erected its ugly head after five decades of peace Relative, November 21, 2017, when he spat a thick column of ash and smoke up to 3 842 m. The incredible eruption was preceded by two months of intense seismic activity dating back to September of the same year. The earthquakes forced 140,000 people to flee their homes and seek safety from refugee centers around the island of Bali.

A team of researchers led by the University of Bristol analyzed satellite photos of Bali provided by the European Space Agency (ESA).

The photos, captured by ESA's Sentinel-1 satellite, show the deformation of the ground around the inflamed Indonesian mountain.

Scientists have speculated that the two-month earthquake had contributed to the magma movement in Agung, deep within the surface of Bali.

"Our study provides the first geophysical evidence that Agung and Batur volcanoes could have a connected plumbing system.

"This has important implications for the prediction of eruptions and could explain the occurrence of simultaneous eruptions as in 1963."

Juliet Biggs of the School of Earth Sciences at the University of Bristol used ESA satellite photos to map the deformation of the soil around Agung.

The volcano expert, who co-wrote the study with Dr. Albino, said ground motion was a strong indicator of "cool magic moving under the volcano".

The researchers found at least 8 cm to 10 cm (3 to 3.9 inches) of ground motion during the heaviest seismicity period.

Their study reads as follows: "The prediction of explosive eruptions relies on the use of surveillance data to interpret patterns and time scales of transport and magma mixing. In September 2017, a distal seismic swarm caused the evacuation of about 140,000 people from the Agung volcano in Bali.

"From satellite images and 3D digital models, we show that seismicity was associated with a deep and sub-vertical magma intrusion between Agung and its neighbor Batur.

"This, combined with observations from the 1963 eruption that caused more than a thousand deaths, suggests a vertically and laterally interconnected system experiencing a recurring magma mix."