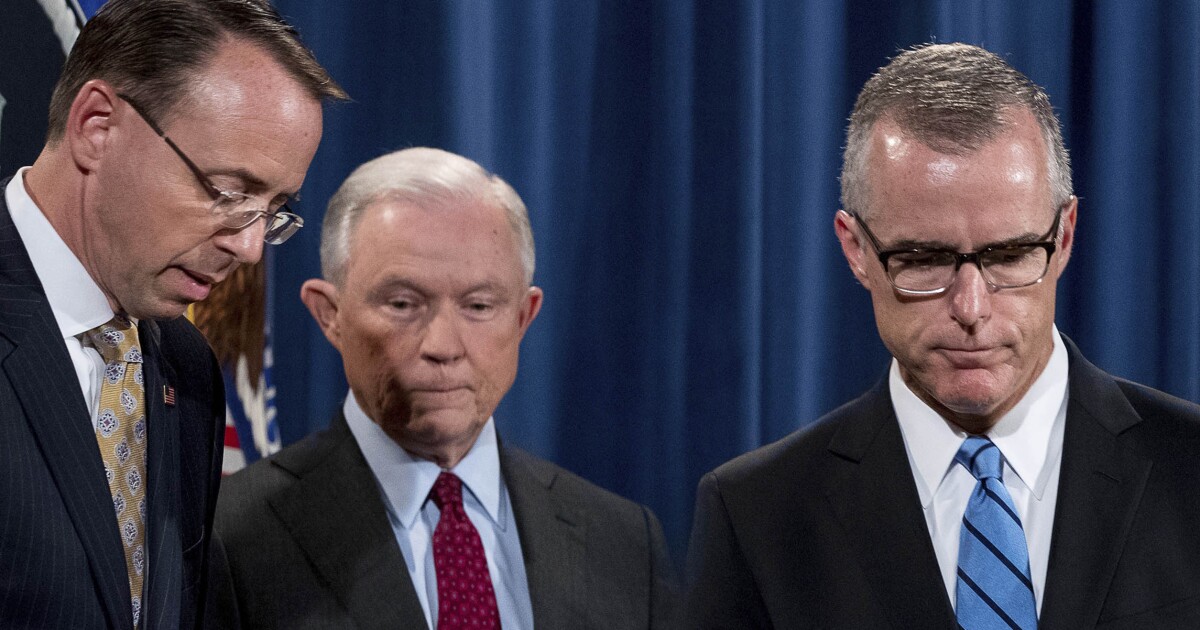 FFBI interim director Andrew McCabe spends his time in the sun trying to sell a book containing explosive allegations – but he undermines the book's credibility by bitterly describing his disordered descriptions of the former prosecutor. General Jeff Sessions.

As described in an article in McCabe's New York Times book, Sessions appears to be "openly racist," with (now in his own words) "difficulty concentrating" while "lacking basic knowledge." In summary, critic Dwight Garner said, "The Sessions portrayal represents a man for whom the simple act of ordering a lunch seems to be beyond the limits of his intelligence and curiosity. "

It is pure slander and quite incredible. My colleague, James Gagliano, is quite right to criticize racism – based on alleged accusations about black Americans, but about FBI agents, the US-Irish FBI acting director. "

This particularly challenges credulity given that the sessions were blocked for a judge's post and almost barred from becoming Attorney General, due to allegations of racism now largely discredited. Even though Sessions looked at the world through a racial lens, which he did not do, he is not stupid enough to express it.

This supposed stupidity described by McCabe, however, is even more absurd. Allow, please, some directly personal observations. I live in Mobile, where Sessions lives. I covered it closely for local and national publications for 21 years. I have had many in-depth conversations with this man, whether or not the record. Informal discussions, including several airport lunches when we were on the same flights between Mobile and the nation's capital, were particularly enlightening as they involved sessions at its best. They also showed him at his best and most thoughtful.

Because they were not on file, I would not disclose (I do not remember specifically) the exact substance of what we discussed, but I can certainly relay impressions.

When there was no need to worry about analyzing every word of the record, the sessions did not become less admirable, but even more so. The less he relied on topics of conversation, the more intelligent he seemed. He would discuss many details about everything we were talking about, whether it was about national issues, events occurring in Mobile or new knowledge. He cares deeply about problems and people and clearly does his homework.

The idea that he would ignore key briefings, would not understand the basic jurisdictional issues of the Department of Justice, or, Lord forbade, radically generalized about various ethnicities, is ridiculous.

But there is more: these descriptions of Sessions come from a man, McCabe, not only pointed at Sessions (who sent him back), but who was also identified by the independent inspector general of the Department of Justice as having lied three times under oath. . The sessions are much more credible than McCabe.

I contacted a trusted observer who was working for the first time with Sessions at the Department of Justice – well, someone with no long-standing ties to Sessions and no obvious "hunting dog". the source has quite reasonably requested anonymity.

"The idea that Sessions is saying a derogatory thing about whoever in law enforcement is laughable," the source said. "The idea that he entrusted this idea, that no one else has ever heard from Andy McCabe? A guy that he never liked or trusted? I do not think so. … Andy should have chosen something more believable to lie. "