Karl Lagerfeld, in memory of his friends and collaborators 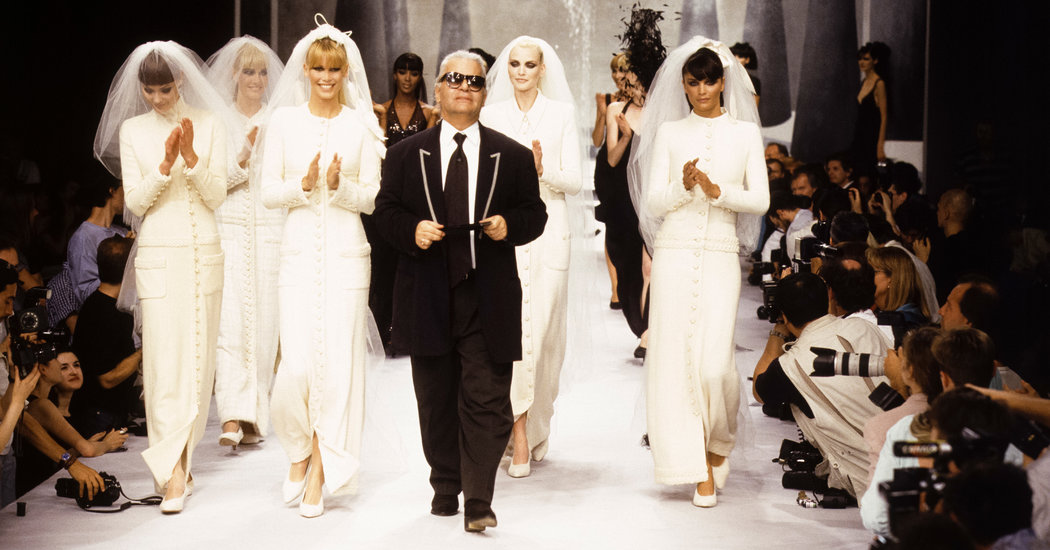 "A very special breakfast was a breakfast in Paris at Karl's at the beginning of the AIDS pandemic. After lunch, people drifted away, but I lingered with him until nearly 5 pm. browsing albums with pictures of a life and a friend he had lost, and it was the only time he talked about the past.

"We always had zigzag conversations, which I loved a lot, ranging from 18th century treasures to baskets to flowers, travel and science. This was perhaps the biggest riddle for me: there was no discussion about the past, but always a vision beyond, plus his world of books. In his house on the rue de l'Université, there was a long room with a very long table with nothing but stacks of books, the whole table and the floor had collapsed to the ground. For anyone else, it would have been an intense drama, but for Karl, it was barely mentioned. He then opened a bookstore with unusual books from around the world and created a huge hi-tech photography studio. "

Carine Roitfeld, fashion editor and stylist, who collaborated with Lagerfeld on various projects, including the book "The little black jacket: Chanel's classic revisited"

"Karl was my rock. He has always been there for me, through years of friendship and creation. His sense of humor, his advice and the precious memories of this time together will never leave me. Karl was really once in my life, my eternal guardian angel. Your love will always be missed!

Karl Lagerfeld was the definition of passion; it fed both his life and his art. His curiosity for everything from history to pop culture led him to dream big dreams and create collections that captivate a rare type of imagination that has had an influence far beyond the world of the fashion. He was a modern fashion designer attached to the art of these traditions, but always attentive to everyday life. Karl was an inspiration, but more than that, my personal friend and always a generous supporter. I think more than anything, he brought to fashion a lively and energetic spirit, a conviction of both dreams and reality. "

"My mother was a fervent admirer of Chanel's elegance long before me and wore every 90s trendy outfit or dress very well. It's she who introduced me to her world. Karl's approach to luxury was a sensational equation of elegance and dream. And a real example for us offering our contemporary vision of luxury in the market. His vision of elegance and luxury were intertwined, and I will never forget to watch my first Chanel couture show. Later, he was the first person to support me, to encourage me, to attend my events and presentations over the years, to buy our items, to wear them and to tell me without hesitation: " You are born in this area, go ahead, it's your time, your turn. I do not like what others do, but you, it is very fashionable. "Or if I wore one of his costumes or outfits and saw him behind the scenes of his show after a big kiss"You are chic like that!"I will miss him so much."

"I have always regarded Karl Lagerfeld as an extraordinary man, both for his professional talent and his life, which he mixed and transformed into a unique art: Lagerfeld's way of being. Perhaps this is also the reason why, even though he was creating for brands with a strong personality, his presence was so obvious and recognizable that he always exuded the joy he felt in designing, photographing, working on books and organizing spectacular fashion shows. I am deeply moved by his passing and I can not help but think that he lived until his last breath plunges into his greatest pleasure: let his imagination go through his work. I remember meeting him many years ago in Tokyo, during a fashion show for several international designers. I will never forget the kindness with which he welcomed me in this important group. "

Natasha Fraser-Cavassoni, writer and author of "Chanel, "A set in three volumes published by Assouline

"I worked at the Chanel studio in 1989 – I stayed there for 18 months. It was the era of mannequins – a very intoxicating period. I did not know anything. I did not speak french. I learned French fashion through Karl. Karl was so nice. The American Harper's Bazaar just fired me and he said, "Who cares?" That was what I needed to hear. He was on your side. I was very nervous, but he liked me because I was different. I have this beautiful diamond brooch that he gave me when I got married. He did not go to weddings, he did not like them. I remember we were driving from church to reception. My husband said, "Someone is following us," and it was a dark car. At the reception, Karl jumps out of this car and drops me that pin. It was very nice.