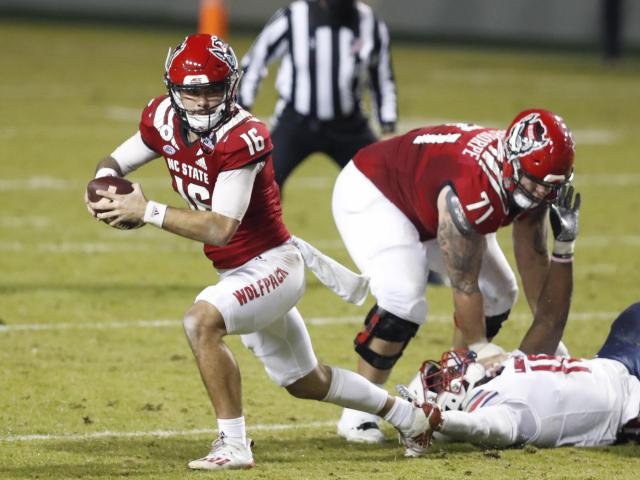 Liberty was on the verge of an ACC sweep.

Fourth quarter heroics White and Jones helped the Wolfpack beat No.21 Liberty 15-14 and keep the Flames from beating all three ACC teams on their schedule this season.

The Flames (8-1) have won wins over Syracuse and Virginia Tech this season and took a 14-9 lead with the ball midway through the fourth quarter.

It was then that White, a freshman who had played just six shots on defense in the first eight games of the season, walked past a pass from Liberty quarterback Malik Willis and offended NC State. (6-3) at the 26-yard Liberty Line.

Running back Bam Knight turned Willis’ mistake into a 4-yard touchdown with 6:53 left in the game. On the next Liberty series, security Isaac Duffy chose Willis.

In the first eight games of the season, Willis had thrown just one interception in 180 attempts.

Liberty entered the game ranked No. 16 in the country when it comes to offense, but it was his defense that held the Wolfpack in check. Quarterback Bailey Hockman (14 of 27, 154 yards) had made two great outings in a row, in a loss to Miami and a victory over Florida State, which struggled on Saturday.

It didn’t help that NC State was reported 14 times a season-high for 123 yards. It was the most penalized game in the Wolfpack since 2012.

After neither team could find the end zone in the first quarter, NC State took a 7-0 lead on a 19-yard touchdown by Knight at 6:56 in the second quarter.

The Flames equalized 19 seconds before the end of the half with a 12-yard pass from Willis to receiver Noah Frith.

Liberty took a 14-7 lead at 7:11 in the third quarter on a 6-yard touchdown pass from Willis to tight end Jerome Jackson.

NC State extended both touchdown practices with key third-down penalties. No practice was more indicative of NC State’s penalty issues than the one that followed Jackson’s touchdown.

The state violation was reported five times, for 39 meters, on the reader. Four of the penalties came after Hockman hit wide receiver Emeka Emezie for a 55-yard gain to Liberty’s 31-yard line.

Instead of getting points, NC State ended up with a 2nd and 37 of their own 42.

Some good came from the missed opportunity. A quick kick from Hockman pushed Liberty’s offense back to his 3-yard line.

On the first down, linebacker Isaiah Moore attacked running back Peytton Pickett in the end zone for two points and to reduce Liberty’s lead to 14-9.

Liberty looked like he could go 3 for 3 against ACC teams before the NC State defense came up with late turnovers and Jones blocked the final kick.