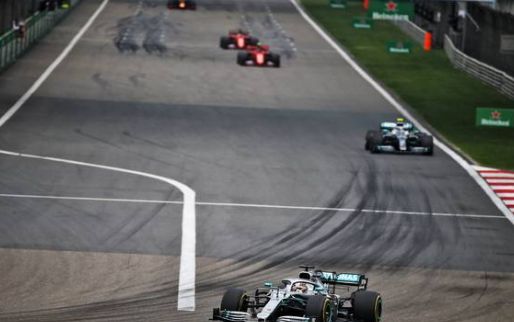 Lewis Hamilton won the 1,000th Formula 1 race to complete a Mercedes double in China and a sixth Grand Prix victory in China for the five-time world champion. This is the third consecutive double for the world champions, who dominate the constructors' championship this season.

Valtteri Bottas came home to record P2, but was comfortably behind his Silver Arrows teammate. The Finn started on pole at the Shanghai International Circuit, but Hamilton overtook his teammate in Turn 1.

Sebastian Vettel could not get close to the Mercedes yet, but managed his first podium of the season. The German is happy with third place. Max Verstappen was at his side and Charles Leclerc completed the top five. Leclerc was once again victim of orders from the Ferrari team – and this, to his satisfaction – the Monegasque driver having been ordered to depart for his German teammate this time!

Pierre Gasly returned to sixth place for his highest position as a Red Bull driver, while registering the best lap right at the time of death, winning the extra point of Vettel and Ferrari.

Alexander Albon is driving the Pilote du Jour, recording his second consecutive point finish in a Toro Rosso, leaving the experience to Romain Grosjean to stay in the top 10!

Daniel Ricciardo finished better than the rest for Renault, recording his best performance in the French team ahead of Sergio Perez and Kimi Raikkonen.

In the first lap of the race, everything has arrived! Hamilton overtook Bottas after a magnificent start from the championship leader. Leclerc, likewise, on his teammate Vettel. Daniil Kvyat crashed against Lando Norris, sending the Brit into the air. Norris then retired from the race with only a few laps to go.

Nico Hulkenberg also retired after technical problems with his Renault. Kvyat was also forced to leave the track after having damaged his Toro Rosso too much, despite a promising weekend for the team.

It is not surprising that George Russell and Robert Kubica clashed, but no one else, again at the back of the grid. Something they will have to get used to this season.

The day was disappointing for Haas, who started in the top 10, but Grosjean was able to handle only 11th place, with Kevin Magnussen a few kilometers from the French, in the 13th.

Lance Stroll climbed a considerable number of places and managed to finish 12th, after a solid run.