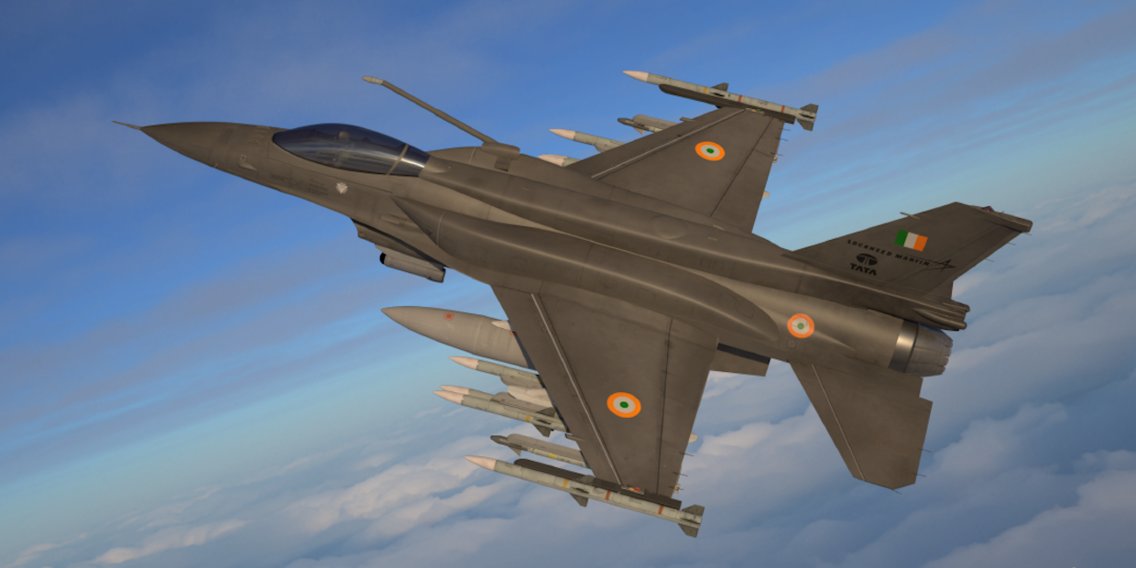 Lockheed Martin has unveiled the new aircraft that the US defense company has proposed to India in response to the RFI (Request For Information) of the Indian Air Force for 110 fighters, valued at more than 15 billion USD.

Nicknamed F-21 (designation used by IAI Kfir in the US service) and introduced by the slogans "Make in India" and "The way from India to the F-35", the l & # 39; The aircraft would be built locally in partnership with the Indian group Tata Advanced Systems.

"The F-21 is different, inside and out," said Vivek Lall, vice president of strategy and business development for Lockheed Martin Aeronautics.

However, the aircraft, which would be "specially configured to meet the unique needs of the Indian air force and will integrate India to the largest ecosystem of combat aircraft of the world with the world's largest defense company, "appears to be an improved F-16 Block 70. an upgrade to the configuration of the F-16V, "the world's most technologically advanced 4th generation fighter aircraft in the world," which made its first flight on October 16, 2015, an evolution of the proven version of the F-16 Mid-Life Update (MLU) Common Configuration Improvement Program (CCIP), which had already been introduced in India in the past.

One of the most exciting improvements to Block 70 over the base F-16 is Northrop Grumman's AESA APG-83 Advanced Radar, which allows for more extensive detection and tracking ranges, a multi-target trajectory. (more than 20 target paths), a high resolution synthetic synthesis. Open Radar Maps (SAR) for all-terrain precision strikes, air-to-air and air-ground operations intertwined for better situational awareness, operational efficiency and survivability; and robust electronic protection for operations in dense radio frequency (RF) environments.

It is interesting to note that the APG-83 is derived from the highly successful fifth-generation AESA family of fifth generation fighter aircraft, F-22 APG-77 and F-35 APG-81, providing thus to radar the F-16 capabilities of 5th generation platforms. and software compatibility with AESA F-22 and F-35 radars.

Based on the first animations and made available online, the F-21 will incorporate other modifications, the most obvious of which is the IFR system probe (refueling in flight) coming out of the right Dorsal CFT:

Also noteworthy is the towed lure system deployed from the base of the tail: the F-16 Block 70 would carry the ATD ALE-50 in a pylon under the wing.

The cockpit configuration has also changed a lot. The one proposed by the upgrade of the F-16 Block 70 was an evolution of the basic Viper cockpit with HUD, two large screens on the front panel and a high resolution video CPD (central stand display). .

Based on the Lockheed Martin launch video, the F-21 will feature a wide-angle HUD and a widescreen display very similar to the one used by the F-35.

The F-21, the F-16 with the highest specification, will compete with 7 other aircraft in the IAF offer, more or less the same as the one that competed in a previous attempt to provide 126 fighter jets to the IAF, the Multi-Role Fighter Plane (MMRCA), a rather lengthy and complex program scrapped in 2015 and replaced by a government-to-government agreement with France for the purchase of 36 Rafale jet aircraft.

What are the odds of the Lockheed Martin F-21 entering a service in the Indian Air Force?

Hard to say. As already explained in an interview with the award-winning Indian Defense website, major buying programs are mostly driven by politics and price rather than by capacity and performance.

In addition, Indian aerospace contracts have already proven to be chaotic and ineffective. With several old and new candidates involved in a potential multi-billion dollar sale and a new long selection procedure, there is a significant risk of a MMRCA "reloading": an endless contract procedure with subsequent negotiations similar to those have led to the failure of the original version of MMRCA v1.0.

That said, several years have passed since the first attempt and the Indian Air Force can no longer wait to get rid of its Soviet MiG-21 and MiG-27 jets and return to a number of more squadrons. close to the famous magic. number of 42 mandated by the Cabinet Committee on Security.

So let's see what happens this time.