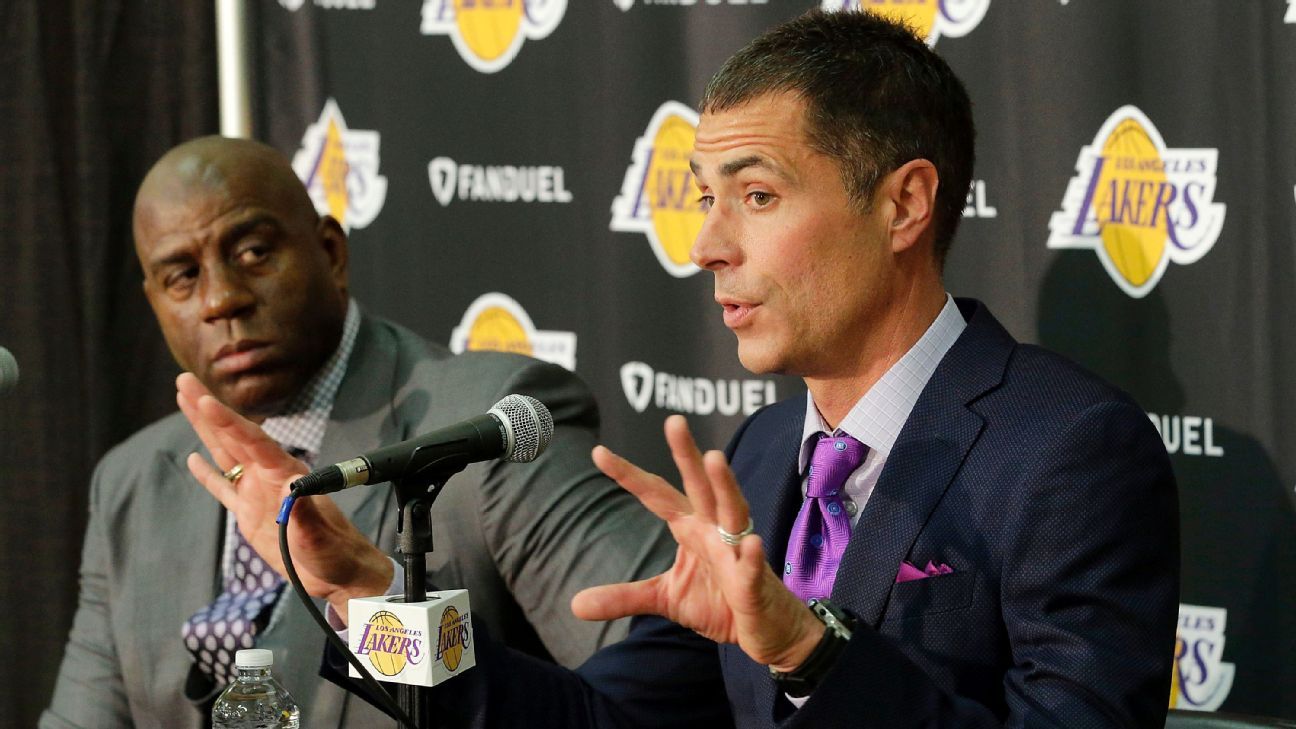 Using the word "betrayal", Magic Johnson explained that his general manager, Rob Pelinka, "cut him in the back", telling people that he was not working hard and that he wanted to fill his position with the Los Angeles Lakers.

In an appearance in First Take Monday morning, Johnson did not hesitate to identify Pelinka as being the person he was referring to when he mentioned that he was fed up with "stabbing" and "whispers" going on behind his back when he suddenly stepped down as president of the Lakers basketball operations on April 9.

"I'm starting to hear," Magic, you're not working hard enough. "Magic is not in the office," says Johnson to First Take. "The people around the Lakers office were telling me that Rob was saying things, Rob Pelinka, and that I did not like these things being behind my back, that I was not in the office enough. I started receiving calls from my friends at basketball outdoors saying that these things were now being said outside of basketball now, but no longer in the Lakers office. "

"If you're going to talk about treason, it's only with Rob," Johnson added later, when asked who had betrayed him in the Lakers' organization.

Johnson's departure knocked out the NBA, with the star LeBron James said that he would have liked at least one phone call.

"I respect LeBron for what he just said," said Johnson after viewing an excerpt from James' comments on HBO's "The Shop." "I love LeBron, I love his family … but sometimes, as a man, you have to make decisions based on your well-being." And I took this decision."

Johnson explained that the other reason he had resigned before the Lakers regular season finale was that he felt he no longer had the power to make decisions, having previously responded to the owner's control, Jeanie Buss. Johnson said he was not allowed to dismiss head coach Luke Walton after Tim Harris, deputy chairman of the Lakers basketball / governor NBA, became too involved in the decisions about basketball.

"The straw that broke the camel's back is that I wanted to fire Luke Walton," Johnson said. "I showed him what he did well and what he did not do well I said, listen, we need to find a better coach." First day, let's think The second day, you can send it back, then the next day, no, we should try to find a solution. "

"So we went back and forth like that, then she brought Tim Harris to the meeting, some of the guys, and Tim wanted to keep him because he was friends with him." I said, when I looked up, I really only answered Jeanie Buss, "continued Johnson. "Now, I've involved Tim, it's time for me to leave, I've got things going on behind my back, I do not have the power I thought I'd have to make decisions And I told them, when it's not fun for me, when I think I do not have the decision-making power that I thought I had, I have to withdraw. "

Johnson said that he had no problem trying to help Joey Buss, co-owner / chairman of the South Bay Lakers team, and Jesse Buss, co-owner / director of the Supervisory and Supervisory Board. Assistant to the General Manager, to finally occupy the position of manager. But he also explained that there were too many people in the Lakers organization who were trying to have their say in basketball matters.

"[Harris] is supposed to run the Lakers business but he was trying to come on our side, "Johnson said. Ask everyone who has a role with the Lakers to stay in this role. OK, Tim Harris, you're president of business, stay there. Jesse and Joey [Buss], hey, you're the assistant to Rob's general manager. Joey, you lead the G League team. So do it and do it well. Once you show that you can achieve excellence, you may now be able to change departments. But for the moment, everyone has a voice. "

Johnson said his resignation was not related to his inability to fire Pelinka.

He stated that the plan was that he was ready to help Pelinka to be replaced, but that he could no longer work alongside someone who, in his opinion, was trying to harm him. .

When asked who else stabbed him, Johnson replied that it was just Pelinka.

"Just Rob," said Johnson. "The others did not bother me … What happened was that I did not have fun anymore at work, especially when I was working next to you, knowing that you wanted my position. "