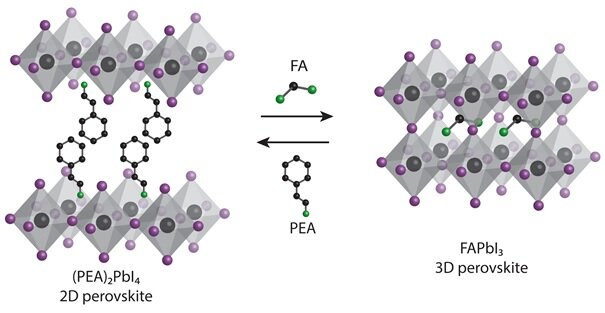 Formamidinium lead iodide is a very good material for photovoltaic cells, but obtaining the correct stable crystalline structure is a challenge. The techniques developed so far have given poor results. However, scientists from the University of Groningen, led by Professor of Photophysics and Optoelectronics Maria Antonietta Act, have cracked it with the help of a blade and d & # 's 39, a soaking solution. The results were published in the journal Nanoscale March 15, 2019.

Lead iodide formamidinium (FAPbI3) is a perovskite, a crystal with a distinctive structure. Perovskites are named after a mineral whose chemical formula is ABX3. In an idealized cubic unit cell, the X position is occupied by anions forming an octahedron with a central cation in position B, while the angles of the cube are occupied by the cations of position A (see illustration).

"This formamidinium lead iodide material has very good characteristics, but the formamidinium ion in position A causes instability of the structure," explains Loi. Three-dimensional films made from this material are most often found to be a mixture of a photoactive phase and a photoactive phase, the latter being detrimental to the final application. Law has thus awarded him his doctorate Sampson Adjokatse, student, is working to find a solution.

After testing possible strategies, he found one that worked well. "And more importantly, one that is scalable and could be used for industrial production," said Law. After all, solar cells must be produced in large panels and it is very important to find an efficient and economical technique. Adjokatse began with another perovskite, in which formamidinium was replaced by a larger molecule of 2 phenylethylammonium, and formed a two-dimensional perovskite. This material was deposited as a thin film using the technique of "scrape", related to techniques widely used in industrial processes such as printing.

"Basically, you spread the material on a substrate with the help of a blade," Adjokatse explains. The blade can be adjusted to produce a film of about 500 nanometers in thickness, creating the 2D perovskite layer. "The important point is that these films are very smooth with large crystalline domains up to 15 micrometers," Adjokatse explains. Smooth 2D films of 2-phenylethylammonium lead iodide were used as a matrix to produce 3-D lead iodide formamidinium films.

This was done by dipping the 2D film into a solution containing formamidinium iodide. This resulted in the growth of a 3D film by "cation exchange", "where formamidinium replaced 2-phenylethylammonium". According to Mr. Law, this means that we now have a method of producing high quality films for perovskite solar cells using a scalable technique on an industrial scale. "